Depending upon your prior experience, you might call it a program monitor, a Canvas, or nowadays even a Viewer. 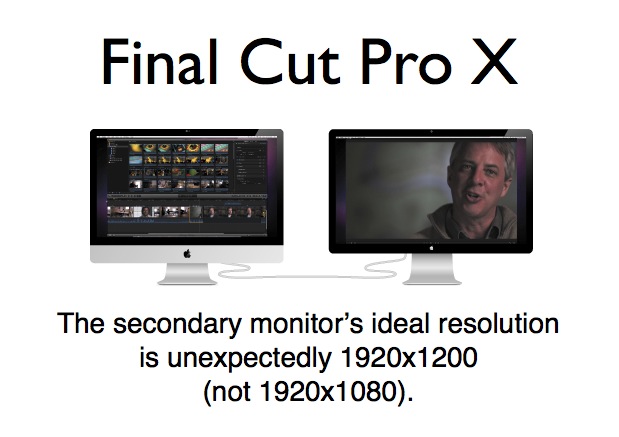 While the jury is still out as to whether we can actually trust a calibrated Rec.709 or sRGB monitor connected directly to a Mac for critical gamma and color evaluation for grading from Final Cut Pro X (the way we can do conditionally as explained in my other articles with Adobe Premiere Pro CS5 and 5.5), some editors who don’t yet demand that capability (or are awaiting complete integration between FCP X and the professional i/o devices from AJA, Blackmagic, Matrox, or MOTU) are looking to purchase a second monitor to use that feature in FCP X. Of course, I’m referring to the feature which Apple called “Digital Cinema Display” in classic FCP jargon, which displayed your “Canvas” (“program monitor” in traditional pro video jargon, plus some other functions) full screen onto a secondary monitor connected directly to your Mac computer. In FCP X, the jargon has changed, so it’s called showing your “Viewer” on a secondary monitor. In this article, I’ll explain why (even though you’re probably editing 1080p) your secondary monitor for FCP X should be 1920×1200, not 1920×1080. I’ll also recommend some monitor candidates for that.

Since way back in the so-called linear video editing days, editors have often preferred to see their final video result on a dedicated full screen monitor, separate from any other source preview monitors or GUI (graphic user interface) monitor(s). Often (but not always) the program video monitor is larger than any of the other ones. As explained above, this monitor in FCP X is called a Viewer, which can sometimes show the final “program video”, and sometimes other things, depending upon the precise operation you are doing.

Show the Viewer on a second monitor in FCP X

The following abreviated instructions are quoted from the FCP X Help:

As I explained back in my 2009 article How to connect your HD evaluation monitor to your editing system properly: Let me count the ways!, some manufacturers like JVC decided to add a data display in the extra space. In that article, you’ll see JVC’s DT-V24L1, which is now discontinued but you may already own, and is still available new from Amazon for US$2,995 (Amazon unfortunately neglects to mention that it is really a 1920×1200 monitor), and you may find available used. However that DT-V24L1 I covered back in 2009 is unfortunately not an IPS monitor, so its best result is only visible when you are front and center. The closest replacement currently offered by JVC is the newer DT-R24L41D (shown below) 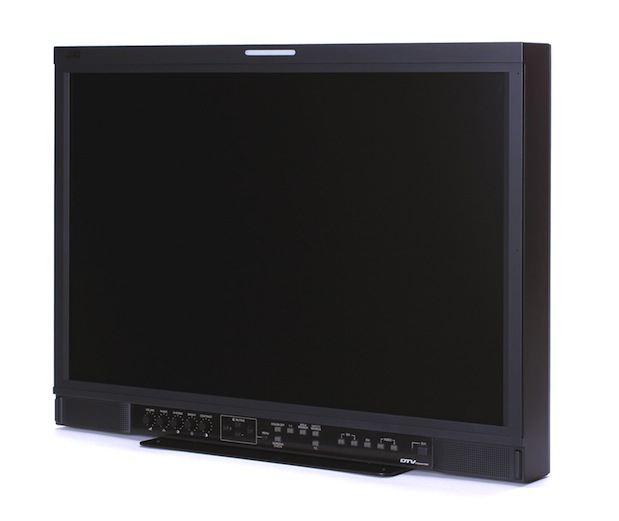 The newer JVC DT-R24L41D monitor is both matte and IPS, for high quality at various angles.

which is IPS (so it’s much better from angles) and has many additional inputs (HD-SDI in addition to its DVI input, which is also HDMI compatible). Its list price is US$3,195 and can be purchased via JVC Professional dealers, perhaps at a price close to the leftover DV-V24L1. The older DT-V24L1 can display text (entered via the monitor’s menu, like PROGRAM, PREVIEW, or your company’s name) while the newer DT-R24L41D one can even show audio levels. However, either of those original JVC data capabilities would be overridden if you use the monitor the way you might as you’ll read ahead (directly connected to your Mac as FCP X’s secondary monitor). The important thing to understand here is that via the DVI input (which is also HDMI compatible) either of these JVC monitors can display 1200 vertical pixels natively.

In the process of doing my initial (but yet incomplete) studies about the FCP X color/gamma issue mentioned in the first line of the introductory sentence of this article, I discovered how and why it makes sense to use a 1920×1200 monitor with Final Cut Pro X as its secondary monitor for the Viewer. As it turns out, Apple programmed FCP X to send out a native 1080p signal (1920×1080) as part of a 1920×1200 signal with valuable data/menus above and below, as you’ll see in this picture: 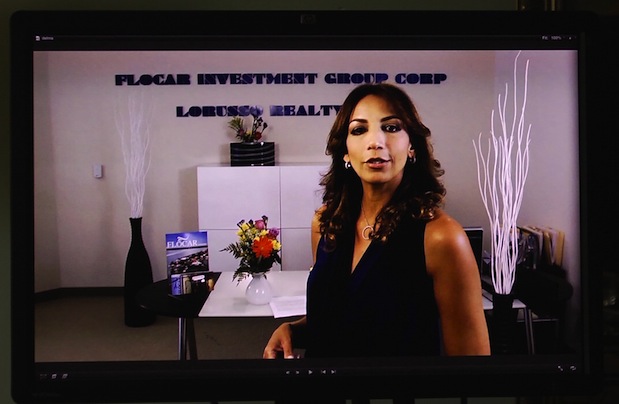 Photo of still image displayed on FCP X’s secondary monitor, which in this case happens to be a 1920×1200 DreamColor, courtesy of Rub©n Abruña. The still image being displayed in the photo is from the production covered in the recent article Panasonic AF100 joins forces with Sony encoder for 25p Euro spot in Miami. It is difficult to make out those details at only 619 pixels wide, so feel free to Click here to see a larger version of this photo.

Apple’s Final Cut Pro X designers found a perfect use for the extra 120 pixels (60 above and 60 below) as you see above. That I applaud, and do recommend the use of a 1920×1200 monitor for that application with FCP X in all of the following cases:

In any or all of those cases, the same monitor you may purchase today to use it this way will still be compatible with any of the latest i/o interfaces offered today.

Here are two suggestions for your secondary monitor for FCP X’s Viewer: 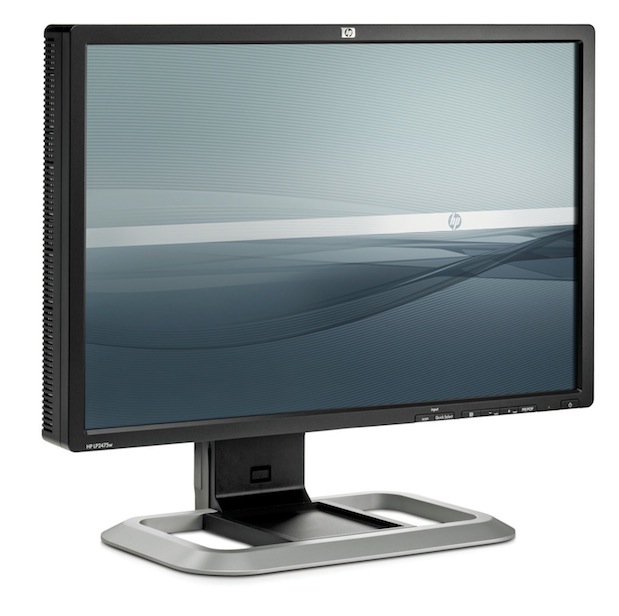 The HP LP2475w monitor is both matte and IPS, for high quality at various angles.

Apple FCP X team: Please either change the background color of the two 60-pixel bars/stripes that appear on the Viewer above and below on the secondary monitor to make them black, or offer an adjustment in the preferences. Their currently grey color seems to be affecting the gamma of the monitor, or at least the perceived gamma. (Although the bars/stripes look black in the photo, when you are actually there seeing the monitor, they are quite grayish.)

Since I know we have an international audience and we are living in the global village (thanks Marshal McLuhan.) When I mention model numbers, I purposely omit regional suffixes when they make absolutely no difference in a product’s features or functionality worldwide. I include these suffixes only when making specific reference to differences among regional variants. So if you see a model number I mention and you are used to seeing that same model number with an “E”, “J”, “N”, “U”, or “P” suffix, what I am writing is applicable to any version, with any suffix. Those few times I do include the suffix, it’s because I am specifically describing features which are specifically added or missing from that version of the product. I encourage all journalists in all media to do the same.
)!), I am constantly researching the possible variants among model numbers in the international marketplace. Often, video equipment manufacturers restrict certain functionality in regional versions, and sometimes they use a strict regional warranty system. Sometimes the manufacturers do this to avoid grey marketing (i.e. to encourage purchasing of products in a local region, to protect local distribution), and sometimes it’s to avoid extremely high import tariffs in a specific market. When they do this, the manufacturers often add a regional suffix to the model number.