There’s a very simple reason that color meters lie about any source that has a discontinuous spectrum: It makes assumptions. This is something that you should not do. Here’s why… 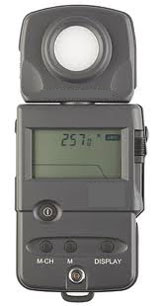 Color meters view the world through three narrow colored filters: one red, one green, and one blue. Those tiny little windows work fine for sunlight, tungsten light and HMI light… but all bets are off when it comes to LEDs.

The life of a color meter is pretty easy: measure three points in the spectrum, calculate the color of light based on the ratio between those three points of measurement, and display a result. As the meter can only see small portions of the spectrum it assumes that the rest of the spectrum between those points exist. If there’s more blue than red then the light is probably daylight; if it contains more red than blue then it’s probably tungsten light.

The problem is that LED lights aren’t continuous sources, so while the readings the meter takes at the three points in the spectrum that it measures are accurate, it knows nothing about what happens in between those points.

I’ve whipped up a couple of examples. These are NOT literal examples and don’t represent objective reality at all. They are simply intended to explain the concept.

Here’s a broad spectrum light source, with lines denoting the possible ranges that cameras and color meters might see: 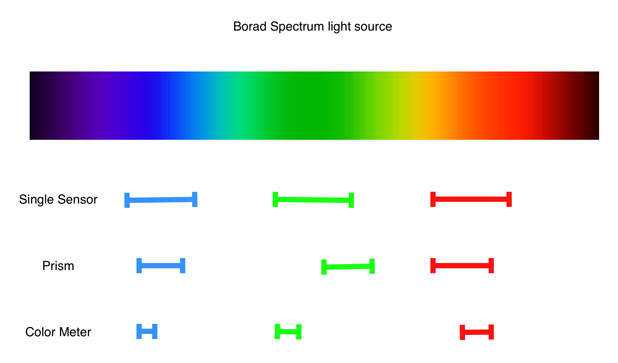 Because the spectrum is contiguous the meter reading will be accurate. 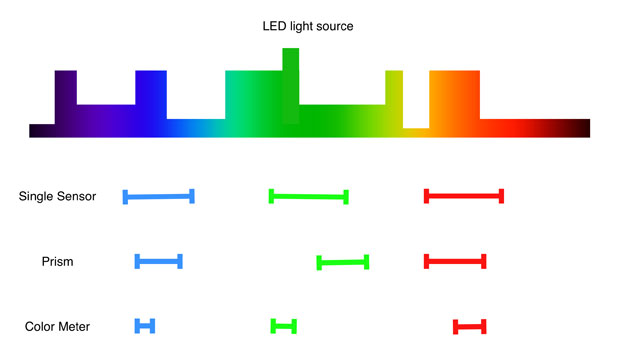 LED light is quite different. It has lots of peaks and valleys, and portions of the spectrum are nearly missing while others show strong spikes. Notice how the color meter detects all the blue this imaginary LED light emits but can’t see the fact that it’s missing a huge amount of cyan (which is very common in LED lights). Cameras will notice that this portion of the spectrum is missing but the meter has no idea.

Green is another interesting area. Our hypothetical color meter sees the green spike, and so does the single sensor camera, but the prism camera doesn’t. A color meter may predict the green spike, but you won’t know if it will actually show up on the camera you’re using until you look through it… and the meter doesn’t indicate how the gap in yellow-green and orange will affect the image because it has no idea they’re there. The fact that red drops off fairly sharply on the right means that flesh tones may not render pleasantly, but the meter can’t tell you that.

How do you describe this kind of light using only Kelvin temperatures and green/magenta offsets? You can’t.

We’re all familiar with how film will see a huge green spike under fluorescent light, but prism cameras generally don’t see this… or at least not very well. The green spike falls largely between the red, green and blue sample points. A single sensor camera, however, will see the green spike and the scene will appear bright green.

And the color meter? You really need to compare it to what you see on the monitor to make any sense of it. In the film days the rule of thumb was to use 1/2 to 2/3 the correction that the meter described because full correction was usually too magenta, but even that varied between film stocks.

Tungsten light, daylight and HMI light are all broad enough in spectrum that a color meter is useful for determining and correcting color shifts. But when it comes to fluorescents and LEDs… the only color meter that works is the particular camera you’re shooting with.

Art Adams is a DP who trusts his meters as far as he can throw them… which is fairly far but not a great distance. His website is at www.artadamsdp.com.