Who should be in charge of Enterprise 2.0?.

There have been a number of discussions lately about where the leadership for internal social media should be located in an organization. For businesses, it’s an increasingly important question as the numbers continue to show that social media is becomes ever more strategic to the way organizations communicate and collaborate today.

While many Enterprise 2.0 efforts have been largely tactical up until now, that has begun to change as social media becomes a first class citizen with the more traditional ways that workers communicate and collaborate. In particular, I’ve noticed that the question of who’s in actually charge of internal social media is being asked more and more often these days.

Let’s put aside for the moment such notions as it’s every worker’s responsibility to be collaborative in the workplace or that social media, oftenportrayed as an activity that would go of itself, doesn’t really need a leader. Instead, it’s a serious management question in the same way it would be asking who’s in charge of any important general-purpose business capability, say operations or human resources. 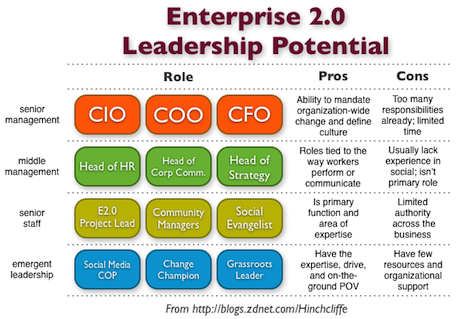