Depending upon your target venue(s) and camera model(s), you can determine your ideal 24 or 23.976 workflow for production, editing and distribution. 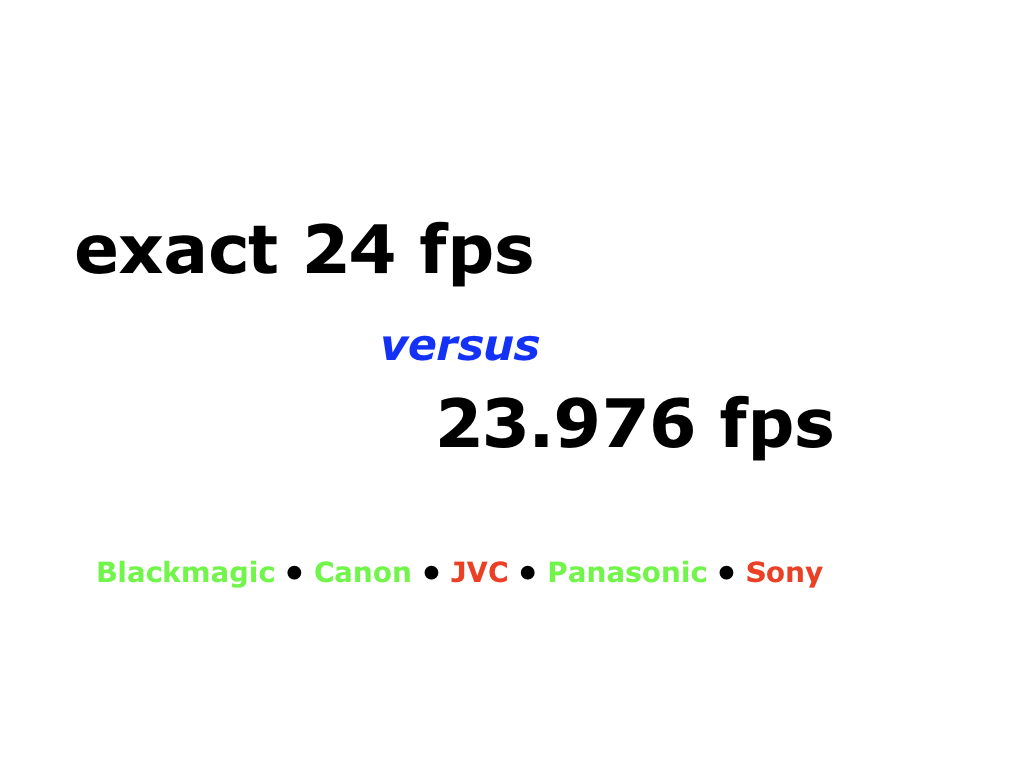 Nine years have passed since I published When 25p beats 24p…. In fact, that was my very first article accepted in ProVideo Coalition magazine back in 2008. Things have changed since then, and the most compelling reasons to shoot and edit 25p even in an NTSC or ex-NTSC region (despite possible distribution in another framerate) have disappeared, although there are still some remaining ones. Now in 2017, there is a more appropriate question to ask and answer: When does exact 24 fps beat 23.976 (aka 23.98)… and when not? Let’s also notice how Blackmagic, Canon and Panasonic cameras handle exact 24 fps so differently from JVC and Sony, their presumed reasoning, and why both JVC and Sony are still guilty of confusing operators, directors and producers by calling 23.976 fps “24” in camera menus.This article also includes an exact 24 fps/180-degree shutter clip by Rubén Abruña.

All the way from the lowest-priced Blackmagic and the not so lowest-priced Canon and Panasonic Lumix cameras, both 23.976 and exact 24 fps are available in multiple spatial resolutions and aspect ratios.

Here are examples of the lowest-priced models which include exact 24 fps (in addition to 23.976):

Blackmagic, Canon and Panasonic offer the choice of exact 24 or 23.967 at any available spatial resolution or aspect ratio to the camera operator. On the other hand, as you will see below, JVC and Sony handle exact 24 fps differently.

From what I can determine, the lowest cost Sony camera with exact 24 (with the latest firmware) is the FS7 (under US$7500) and (like JVC) only offers exact 24 with 4K DCI spatial resolution. If you shoot in any other spatial resolution, exact 24 is not available.

Beyond JVC’s and Sony’s decision about when to offer exact 24 fps, and when not to, both JVC and Sony are still guilty of confusing operators by calling 23.976 fps “24” in camera menus, when they are not really offering exact 24. JVC and Sony: Please fix this in your next firmware updates! Call it “23.976” or “23.98” if you are truly short on space. Only call it 24 when it’s exact 24! Even after the latest firmware upgrade in the JVC GY-LS300 and Sony PXW-X70, it is still deceiving.

What if you shoot with iOS (iPhone/iPad/iPod Touch)?

As explained in detail in my recent Understanding iPhone framerates for shooting, editing & distribution, in iOS, the recordings are only targets like ±24, ±25 and ±30, so you can shoot at ±24 for distribution either at 23.976 or 24 fps. You choose that later.

Exact 24 is acceptable for DCP (projection in digital movie theaters), the web (including Vimeo and YouTube), mobile devices that play video, Blu-ray and Blu-ray 4K UHD.

Above is an example of exact 24 fps shot by Rubén Abruña of EditingTraining.com with a Panasonic Lumix GH4 at 1080p and 180 degree shutter.

Although the ATSC (Advanced Television Systems Committee) specs include exact 24 (and even 25, exact 30, 50 and exact 60), to my knowledge, TV stations in the United States still demand content providers supply one of the non-integer rates, including 23.976, 29.97 and 59.94. More details in the next section.

23.976 fps is acceptable for the web (including Vimeo and YouTube), mobile devices that play video, Blu-ray, Blu-ray 4K UHD, DVD and television broadcast in countries that follow ATSC specs.

Some TV stations will force content producers to create a pulldown over 59.94i, while others will accept the native 23.976.

If your show is not targeted for over-the-air television, but only any combination of DCP (projection in digital movie theaters), the web (including Vimeo and YouTube), mobile devices that play video, Blu-ray and Blu-ray 4K UHD, and your camera is one of the ones that can shoot exact 24 fps (see the third, fourth and fifth section of this article for details), you may be better off shooting and editing in exact 24 for the following reasons:

Nowadays, both Mac and Windows computers struggle to play non-integer framerates properly. Just look at the deep workarounds I described on page 3 of Review: ZBook Studio G4 w/DreamColor for prepress, video editing/grading. We can’t expect our viewers to go through those hoops, or to purchase an external device (AJA, Blackmagic, Matrox) in order to play non-integer framerates properly.

Fortunately, HDTV sets and 4K UHD TV sets in the United States must be able to support both 23.976 and exact 24 fps (since some Blu-ray disks come with that rate). 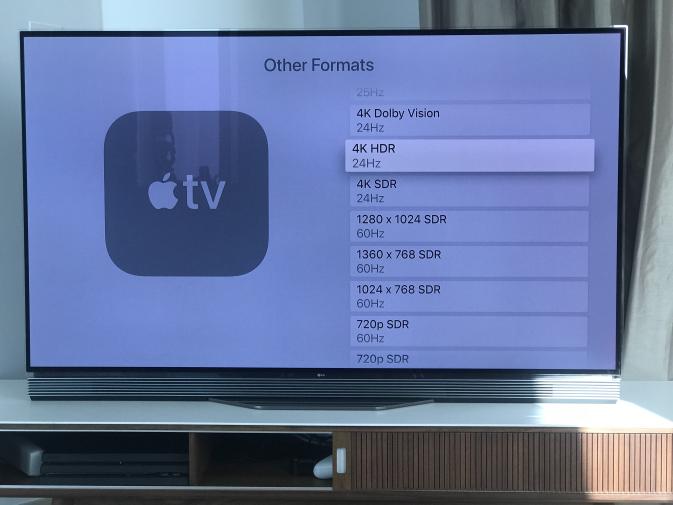 According to a recent comment by Rasmus Larsen in FlatPanelHD.com (illustrated above), the new Apple TV 4K finally offers 24 Hz exact output in its advanced menu, but not 23.976. This is the same as in currents Macs: they support 24 exact (as long as the connected monitor or HDTV does), but not 23.976.

What if your show is targeted for both over-the-air TV and DCP (digital cinema)?

If your show is targeted for both over-the-air TV and DCP (digital cinema), I would recommend you shoot and edit in 23.976 fps, since over-the-air stations always demand a specific, exact duration, while movie theaters don’t. So you can make your master at 23.976, edited for the television station’s exact duration. Then you can make a version for DCP at exact 24. Even the duration will be slightly different for DCP, it won’t matter, because movie theaters don’t ask for a precise duration the way over-the-air television stations do. Kevin P. McAuliffe has just published a series of articles about how to make DCP files here in ProVideo Coalition magazine.