It’s not about analog vs. digital, it’s frame size vs. focal length

In the Sept. ’08 issue of Wired Magazine, in an article about the RED camera called “A Star is Born,” the author states that the difference in depth of field between film cameras and HD cameras is due to “analog versus digital,” with no other explanation. I’ve written this for him and for anyone who wonders why 35mm film and large sensor HD cameras have so little depth of field. 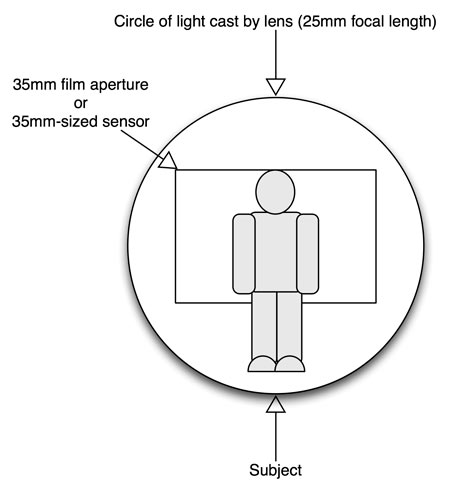 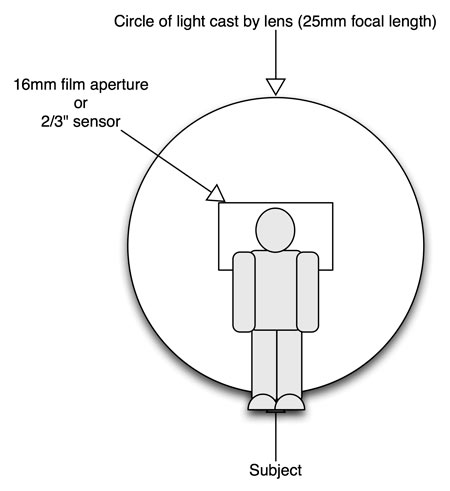 Here’s the same lens, shooting the same subject at the same distance, but with a Super 16mm film gate or 2/3″ sensor. All that’s changed is that we’re now sampling a smaller section of the image projected by the lens. We’ve gone from a wide shot to a close up just by changing film or sensor size, but the depth of field remains the same for a subject that distance from a 25mm lens. And while we’d expect a lot of depth of field for a wide shot, we don’t expect it on a close up–but try to throw the background out of focus on a 25mm lens in Super 16mm or on a 2/3″ HD camera. It’s hard to do.

The difference in viewing angle isn’t strictly 2:1 between 35mm and 16mm (35mm-sized sensor and 2/3″ sensor) but it’s close enough (around 2.4:1) to give you an idea of what’s going on. And if you’re wondering why you can’t ever get the background out of focus on a 1/3″ chip camera, it’s because you’re sampling an even smaller section of what the lens sees, so even shorter focal lengths are required. For example, while the 25mm lens above started out as a wide shot and became a head-and-shoulders shot simply by stepping down in sensor size, another step down in sensor size will make it a tight closeup–but still with a lot of depth of field.

To shoot the same shot on all the cameras we’ve spoken about (35mm, 2/3″ and 1/3″) we’d be looking at using (approximately) the following lenses to keep the same angle of view as in the top diagram (a wide waist-to-head shot):

All will yield the same size shot, with the camera at the same distance to the subject, but with drastically different depths of field.

If we shot a close up of this same person with an 85mm lens, here’s what would happen:

With each step we are doubling the depth of field… which is why you’ll never get much out of focus when shooting with an HVX-200 or DVX-100.

Depth of field doubles if you halve the focal length of the lens.

Depth of field halves if you double the focal length of the lens.

Depth of field doubles by stopping down two f-stops.

Depth of field halves by opening up two f-stops.

If you want do see how much tighter your shot will be if you doubled the focal length of your currrent lens, just look at 1/4 of the frame–between the center cross hair and any corner. That’s the frame if you put on a lens that’s twice as long.

If you reduce the size of the sensor or the film gate by a factor of 2 (say between 35mm film and 16mm film), your depth of field will effectively double because you now need a lens that’s 2x as wide to get the same shot that you had before.

If you set up a shot with a 50mm lens, and then set up the same shot on a 25mm lens by moving the camera toward the subject, you’ll have exactly the same depth of field for both shots.

Anamorphic lenses have half the depth of field of regular lenses because they are really two lenses in one. For example, a 50mm lens will be 50mm in the vertical axis but 25mm in the horizontal axis, resulting in a 2:1 squeeze. And since it’s 25mm in the horizontal axis it’s actually a wide angle lens, but with 50mm depth of field. That’s why pulling focus in 35mm anamorphic is much more difficult than spherical 35mm formats. A close up shot with a spherical 35mm film lens might require an 85mm lens, but the same shot in anamorphic will require a 180mm lens at the same camera-to-subject distance. Any camera assistant will tell you that pulling focus on 180mm lenses can be very exciting indeed.