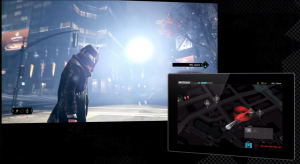 How video games can and will make money is a hotly debated topic in the entertainment industry. Look no further than the recent announcements from Microsoft where they committed to their new console's “always-connected” concept but then quickly backed away from it after consumers and their competitors raked them over the coals. Some are predicting it's only a matter of time before the model Microsoft originally wanted to promote will become both a necessity and a reality, but one thing no one can argue about is the fact that the way people play video games continues to evolve.

It's for that reason that the emphasis Ubisoft is placing on the second-screen is such a vital development, and the folks over at GamesIndustry International have done a great job showing just how committed they are to the second-screen.

“I'm convinced it's the future,” Ubisoft chief executive officer Yves Guillemot told GamesIndustry International.  “What I like in second-screen play is its accessibility, which means different types of people can play. Those who don't know how to play with the [controller] or don't like to play with it can use touch.

Allowing gamers to experience and control the games they are playing in new and different ways is a hot transmedia topic, and seeing a company as big as Ubisoft committed to this sort of experience could really influence how games are developed.  But of more importance is how the audience responds to these experiences, and — as Microsoft found out — they do not often have issues with keeping their opinions to themselves.