Getting rid of old desktop video gear is as hard as disposing of nuclear waste. Any suggestions? 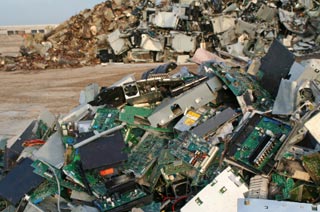 It’s ironic that Giles Baker of Adobe just wrote about going tapeless, as we’re currently in the middle of a major spring cleaning of our studio where we are getting rid of our tape decks, among other things. Some are being sold on eBay (here’s our DVCPRO, BetaSP, and SVHS decks, in case you’re curious; the DLT drive and tapes go up in a few days), some are being donated (and we could use some suggestions on that below), and the rest are being trashed.

In Los Angeles, you’re not allowed to place electronic items in the trash – a valiant effort by the city to keep a lot of toxic metals out of landfills. So what are we supposed to do instead? We have a series of hazardous material collection centers around town that take electronics, but they’re open limited days, and take no more than six electronic items at a time with a weight limit of only 125 pounds – heck, two 20″ CRTs exceed that! Even more of an issue is that they’re for households only – not for businesses (even home businesses). Businesses have even more restricted drop-off dates, and you have to pay to drop items.

As most charities don’t want your old computers and monitors (it costs them more to dispose of these items than they make back selling anything still of use), this has led me to exploring the underworld of salvage and recycling centers. There’s an entire economy of people who prowl the streets in rusted-out trucks, looking for any waste of any value set by the curb – from soda cans to entire cars – which they then take to these businesses and barter a per-pound price for. It’s beyond any William Gibson novel

you’ve read. (Unfortunately, commodities such as copper are getting so expensive that enterprising citizens have taken to stripping cable out of street lights and the such in order to make a buck.)

Apex Electronics in Sun Valley took our old computers, hard drives, Radius Telecast frames, backup power supplies, and related equipment for the princely sum of 10 cents a pound. However, a visit to Apex is more than worth the trip just of sheer entertainment and geek-hunt value. If nothing else, you absolutely have to take their virtual tour. Yes, those are actual rocket carcasses in the last pano; I took me several visits to find the antique truck buried under all the junk in the outside yard.

Apex won’t take toxic items like monitors and printers anymore; a neighbor who runs his own scrap yard (and who has stopped accepting electronic waste, for reasons that are about to become apparent) turned me onto Valley Iron in Sun Valley, which is one of the very few places set up to take CRTs – for 5 cents a pound; just enough to pay for the gas to drop them off. But hey – it’s better than putting lead and mercury in the ground. (Our ground. A lot of our electronic waste gets shipped off to other countries to pollute their ground – and citizens – instead. It’s a wonder we don’t ship them our nuclear waste as well. Oh – right. Sorry about that…)

Fortunately, more and more electronics manufacturers are offering recycling programs for their products. This page by the NRDC contains a good clearing house of these programs, as well as stores such as Office Depot which offer recycling options. In many cases, you will have to pay to have an item recycled, but if you dig around, you may be able to find rebates or other special offers – for example, HP offers recycling credits that can be used to buy other HP products.

We’d like to hear are more suggestions from you on how to deal with all this waste as we collectively upgrade our studios. Fortunately, another neighbor has turned us onto a school that will take our old TV sets and VHS decks for A/V systems to play back their vintage educational tapes – bonus points if you can also give them a cart with wheels as well (and let’s face it; we’re retiring more TV stands these days as the world goes flatscreen).

What we’re currently trying to find a home for are a bunch of lightly-used BetaSP tapes – hardly anyone’s buying our new ones on eBay; the city says throw them in the landfill instead of HazMat. Certainly someone out there knows about a school or non-profit who still uses BetaSP in their production and who would take them in exchange for shipping or picking them up? We’d be thrilled to see them to go someone who can actually use them, rather than helping build a man-made mountain or island out of our waste.