The research analysts have spoken so it must be true 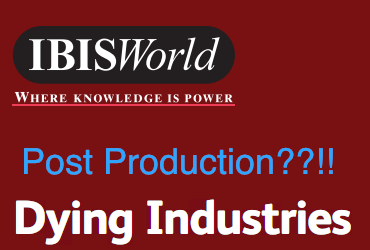 If you were wandering around the Twitter world this morning you might have seen discussion of a Wall Street Journal story that listed “video post production services” as one of the top 10 dying industries! But don’t be too sad fellow editors, this Business Week article lists editors as one of the Top 10 Careers of 2011! We’re damned if we do, damned if we don’t.

The WSJ article actually comes from an IBIS World industry report. The entire PDF can be read here. The actual quote about the post-production industry isn’t actually all that startling and is really something many of us have seen for a while now:

Video Postproduction is the second notable information industry that is exhibiting steep declines. Technological advances, particularly involving the widespread adoption of digital media have adversely affected the industry’s range of services, from editing and animation to archiving and format transfer. While the use of this technology is becoming widespread, it is undercutting the industry’s services since production companies can now do much of the work in-house.

Contrast that with the Businessweek article that names Film & Video Editor as one of the “Top 10 Careers for 2011.” I have to take this one with a grain of salt since they actually use the term FILM in the title but here’s what this article says:

With YouTube now hosting more searches per day than any site save Google, the need for film and video editors is clear. The California Labor Dept. expects the field to grow in 2011, as agencies, media firms, corporations, and institutions look to spread their messages via video-so don’t limit your search to one sector. This field requires specialized training, of course. It makes a great choice for creative types who want to expand their horizons or for photographers and filmmakers looking to boost their earning potential.

So there it is. Both sides of the coin. The WSJ comments are a particular interesting read for the discussion on all the industries named. Take it for what it’s worth and if someone ever tells you that no matter what the research analysts say a monkey could edit these days due to the cheap and easy availability of post-production software … tell them they’re full of shit: