Video Copilot released Element 3D v2 today. E3D v2 is $199 or a $99 upgrade, with more bundle upgrade discounts. The plug-in is compatible with After Effects CS5 + above.

◊ Element 3D is an After Effects plug-in that lets you import and animate 3D models, even as a particle array, and extrude text and mask shapes in real time. It’s useful for all of us, for newbies and old hands & for straight 3D and more abstract experimentation, at least if you have a more recent OpenGL graphics card. Some basics on this tool can be found in an intro roundup Element 3D: new After Effects plug-in. 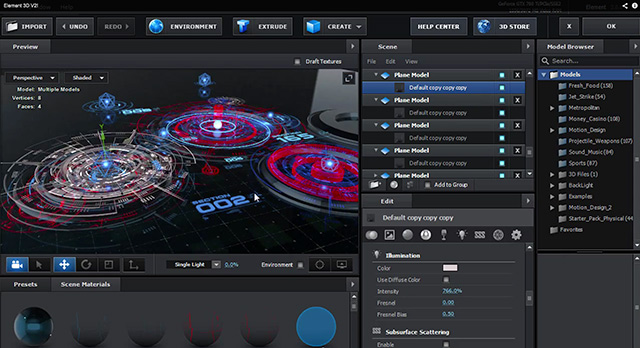 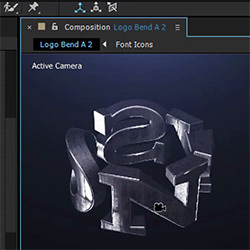 The “mystery feature” is most welcome: 3D distort, 3D noise, and bend & twist. Other surprise additions include pre-material transfer modes, matte shadows, wireframe rendering improvements, and improved bevels.  There’s also a new option to convert any image to a normal bump map, and new for C4D Users, Element 3D V2 can import most materials and textures from C4D automatically.

Mylenium has some positive thoughts on this release. See also the fun “top 5 features” video from Sean Frangella below. 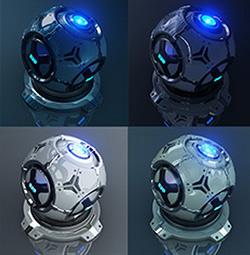 Andrew Kramer has already announced the new Pro Shaders 2 with 2K Maps and physical shaders, a new Motion Design 2 model pack that was designed for Element 3D V2, and BackLight: 8K Environments & Light Maps. There are numerous additional details and more previews tutorials coming at Video Copilot. Also, some new image formats like EXR and HDR were planned as a free 2.1 feature.

◊ The real money is in the model and other support packs. The Ultra Studio Bundle is $700, and includes the plug-in and all the tools that make full use of features. See Tools and free models for Element 3D on MovieType and the numerous free and unfree model & material packs and bundles.

Here’s Andrew’s intro video and the October preview as well.

The blue UI highlights in E3D v2 and Hitfilm 3 are blinding!

D.L. Watson has an Element3D v2 tutorial – “The Transport”: