Not all sources of low-frequency noise are electrical… 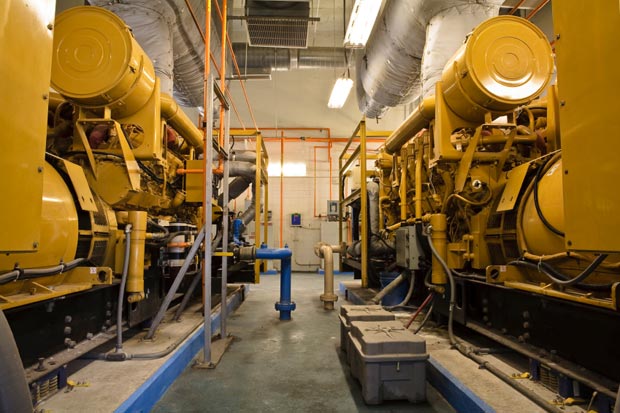 I've already written about eliminating buzz and hum from audio connections. However, truth be told, I've been fighting an insidious low-frequency rumble in my latest studio for over a year now. Everything seems clean electrically, but when I listened to the playback of my voice recording sessions, I heard an extra low-frequency component whenever the downward expander (noise gate) on my Focusrite VoiceMaster Pro opened up. But I think I finally have it licked.

Extraneous noise is a particular problem for me, as I tend to record conversational-level voice (as opposed to the louder ensembles George Sanger recently talked about). I've already put the computer and UPS in a box under the desk with sound-defusing foam around the air and cable holes (thankfully, Mac towers have become quieter over the years), carefully positioned the mic so that its maximum off-axis rejection aligned with where the computer resides, and learned to shut down the evaporative cooler on that end of the building during sessions (even though it was on the roof, an additional floor above the studio). But I still had problems.

Turns out I had two sources of airborne and vibration-based hum I wasn't counting on:

The solution to the second problem was Sorbothane: an old friend to hi-fi geeks who used to try to stop any vibration from reaching the cartridge and stylus in their turntables. Sorbothane is an odd type of rubber (technically, “a highly damped, visco-elastic polymeric solid that flows like a liquid under load”) available in a variety of form factors that is excellent at absorbing vibration. Click here for Sorbothane's product and application guide; Sorbothane notes you should take the weight of the object and frequency of vibration into account when choosing a solution, lest you potential make the problem even worse. 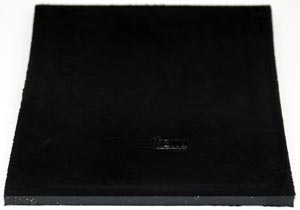 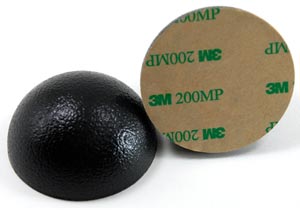 I admit to a considerably less scientific approach: I cut a .25″ x 5″ x 5″ Sorbothane pad in half and placed it underneath the MacPro's “feet” (actually, two hoops of metal); for good measure, I also used a set of 2″ hemispherical feet underneath the UPS. So far, so good. I'll admit failure (and share any other solution I come up with) if the situation warrants. Again, this wouldn't be a problem if I was singing loudly instead of talking quietly; musicians don't have to worry about this particular problem as much as, say, podcasters. 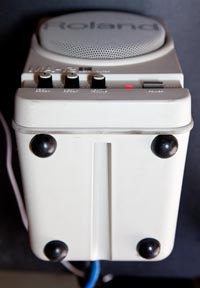 By the way, there are other used for Sorbothane in the studio as well. For example, I had trouble with my computer desk monitors (the sadly discontinued Roland MA-12C so many of us loved) sounded way too bass-enhanced for their size. Turns out they were mechanically coupling with the computer desk, using its entire surface as a passive woofer. Some small Sorbothane feet helped tamed that as well.