One of my favorite blog categories / columns has always been the ongoing Useful Tools for Editors topic that has been a part of my coverage of our little industry since I began the Editblog many, many years ago. It was a part of my original site and then I moved it over to Studio Daily for a number of years. I’m no longer blogging for Studio Daily on a regular basis so it is time to once again move the Useful Tools for Editors column and bring it back home to the Editblog on PVC. There’s so many useful tools these days I’ll try to do a semi-regular round-up of them … that is unless one comes along that is so cool it can’t wait. Do you have a useful tool for editors? Then contact me and tell me about it.

If there is one thing editors can’t really ever have enough of it’s sound design elements. Media Edit Soundpack Pro is a very nice $200 collection of just that from Beatsuite.com (yep, another stock music site). There’s a lot of good stuff in this package and while it has been out for a while I just recently discovered it. There are over 1,000 WAV files in the collection and if you’re sound designing for some cool, actiony cuts then you’ll probably find good use for categories like Dramatic Impacts and Whooshes and Swooshes. It’s a very nice collection but why they supply the sounds at 44.1 k and not 48 k is beyond me.

A free demo is available as well.

Are you one of the lucky few who have your Blackmagic Cinema Camera in hand? If so then you may find use for Nick Shaw’s BMD Cinema Camera LUT for Final Cut Pro 7. Nick is no stranger to FCP LUTs as he long ago created one for viewing of Alexa LogC footage, RED, Canon C300 and Sony F65 S-Log2. He’s no stranger to LUTs in Final Cut Pro it’s only natural he would create one for the BMD camera.The LUTs (look up tables) are designed to give a much more pleasing Rec. 709 look to your footage instead of the less pleasing flat image that comes off the camera. Cut your program with the LUT and then provide the original flat image to your colorist and you’ve got the best of both worlds.

The LUTs are available from Nick’s Antler Post online store for $30 and a free demo is available.

Cine Meter is an interesting little $4.99 iOS app (iTunes link) from Pro Video Coalition’s own Adam Wilt. It looks like it could be a very useful tool to have on-set (so I guess it’s not the most useful tools for editors but that doesn’t make it noteworthy) to help when evaluating lighting setups for a scene. Adam’s website says this:

Cine Meter is a professional film/video/photo application for your iPhone®, iPad®, or iPod touch®, using the built-in camera to provide a shutter-priority reflected light meter, an RGB waveform monitor, and a false-color picture mode.

I did a bit of a double take when I first saw images of the app running as there is a waveform right on the iOS screen. As an editor it got me wondering how plausible it might be to have an iPad waveform app that could maybe take the record/program monitor right out of a desktop NLE. It’s just an idea but if you’re an iOS developer and want an idea for a post-production iOS app then there ya go.

Kinda cool to see a waveform monitor running on an iPhone huh?

There’s a fair set of controls in the app and Adam has provided a good how to as well.I like the idea that this thing can help with capturing better green screen so I’ll be recommending it to some shooters I know for that alone. There’s an faq as well and if you have any questions Adam will be able to answer them.

The folks over at plug-in maker Crumple Pop have introduced Dale Grahn Color for iPad. Who is Dale Grahn? He’s a color timer for some of Hollywood’s biggest features and a look at his IMDB you can see he has done a lot of them. He teamed up with the Crumplepop guys to create a unique iPad app that can help you learn about color correction and color grading. The idea is simple: take a look at a photograph that Dale has colored and then use some simple controls to try and match. Once you’re done you get a score and can then watch exactly how Dale got his look. 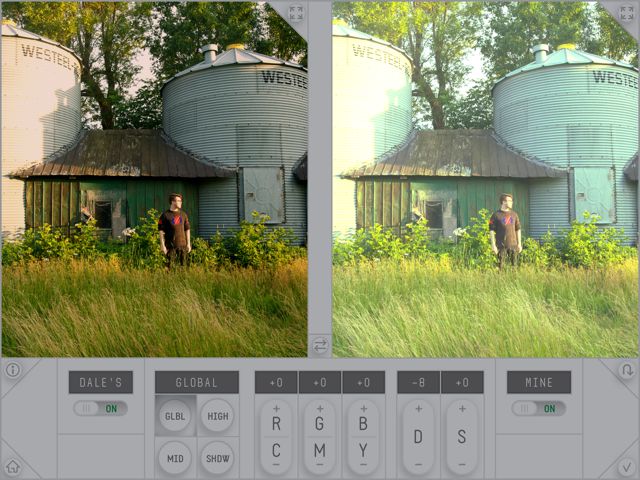 Minimalist controls and a side-by-side images means it is a very easy app to use.

The controls are simple in that you get the basics that old school film color timers, like Dale Grahn, have used for years. If you’re expecting a DaVinci Resolve-type learning console with mattes and power windows you’ll be disappointed as that’s not what this app is all about. But if you want to spend $3.99 (that’s an launch price) then grab it from the iTunes store and get to learning. 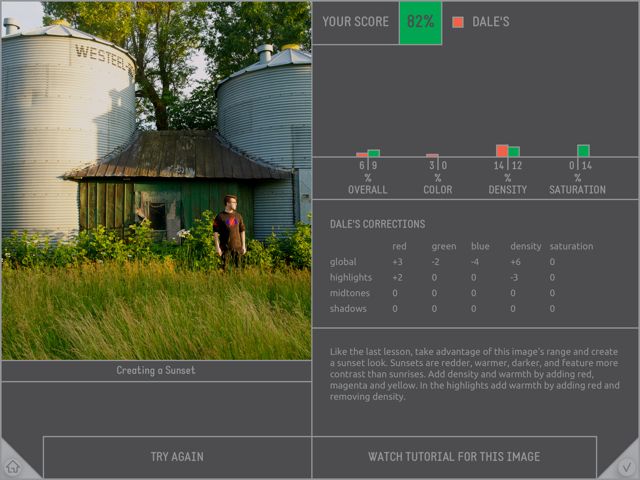 When you’re done you can see how you compare to Dale and exactly what was done to the image.

There’s been an update to the perennially useful tool FxFactory from Noise Industries. This incredibly useful plug-in package for Apple Final Cut Pro and Adobe Premiere Pro / After Effects is always getting updates with new functionality and/or new plugin partners. The 4.0.2 update is no exception as there’s a number of new things in this update including some borders, some picture-in-picture effects, better keying, transitions and vintage looks. Two of the additions for FxFactory 4.0.2 caught my eye but note these are both for Final Cut Pro X only and won’t work in Adobe Premiere Pro. 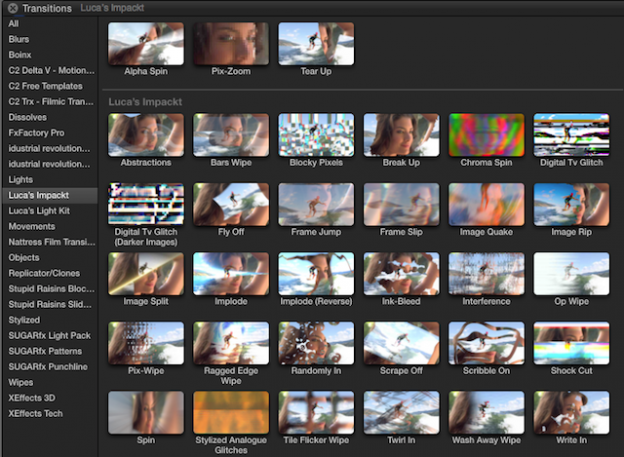 Impackt is an addition download after installing the FxFactory update (Cost is $49) and includes a large array of transitions that actually have quite a few useful one included in the package.

Finally, Ripple Tools is one of the more interesting of the additions I’ve seen to Final Cut Pro X. It’s not trying to be full of big flashy transitions or the entirely overused grain and film look but rather a $29 collection of different types of things that might come in handy within many different parts of an edit. These include garbage mattes, adjustment layers, 3D moves and alignment guides. Yes there are a few picture-in-picture effects and vintage looks but there is way more amongst these 12 tools than just that.

This type of thing would be a very useful type of plug-in package for any NLE including Adobe Premiere Pro and Avid Media Composer. So get to working on that plug-in makers. Check out the video below.

That’s if for the first edition of Useful Tools for Editors back home on the Editblog. There will be many more to come.