If you read my Notes From the 2014 Editors Retreat post then you might have seen the mention of a session called Gearheads. This was a fun session where attendees were asked to submit some piece of gear they like or find useful. This could be hardware, software, an app, anything really. I though the Gearheads submissions would make for a great Useful Tools for Editors entry. Here’s some that I made note of.

Ever hand your much beloved iPhone off to a total stranger to take a group photo? If you have Groopic then you may be less likely to get your phone stolen by a stranger. This app lets two different people from the group take a photo and then Groopic stitches them together into one so nobody gets left out. 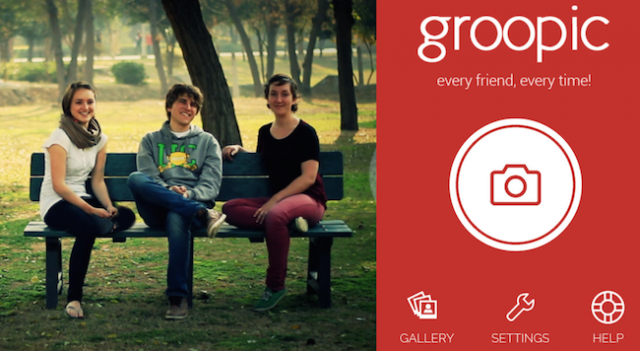 iTunes says the app is free but the top in app purchase is “unlock” for 99¢. That probably means it costs 99¢ to be useful.

This little wonder might be the best friend of the internet connected traveler. For under $50 you get a little device that can take one Internet connection and distribute that to several different devices. That sure beats the often high, per device prices that hotels change for slow and usually spotty internet access. You connection from the WL330N3G will only be as good as the connection it can make but at least you might not have to buy multiple connections for multiple devices. 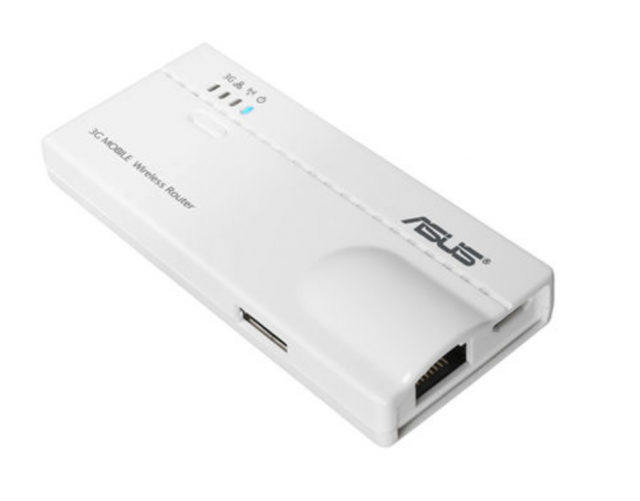 I was able to use this thing to get my iPhone to control my Keynote presentation since the hotel wifi wouldn’t let the iPhone pair to my laptop as a Keynote remote. And for some reason Apple doesn’t seem to let an iPhone and Macbook Pro connect via Bluetooth for this. Very handy.

I’m sure directors still love to have a viewfinder hanging around their neck so they look cool and superior to everyone else on the set but in the age of smartphones the computer can probably do the job better. The Artemis Directors Viewfinder is a $30 app that simulates just that in the digital age. 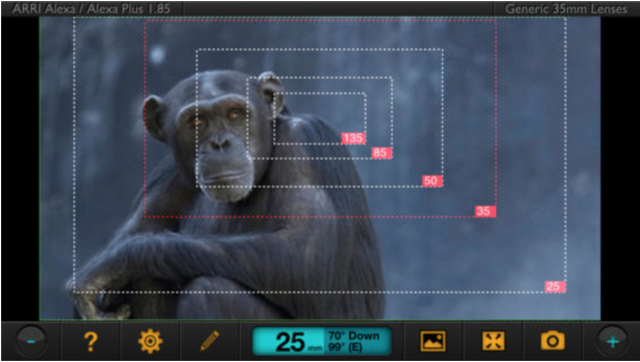 Check the app’s webpage for links to iPhone, Android and … wait for it … Blackberry versions of the app.

PVC’s own Adam Wilt got a mention with his Cine Meter iPhone based light meter. This $5 app (iTunes link) is a “professional film/video/photo application for your iPhone®, iPad®, or iPod touch®, using the built-in camera to provide a shutter-priority reflected light meter, an RGB waveform monitor, and a false-color picture mode.” That’s pretty cool for $5. 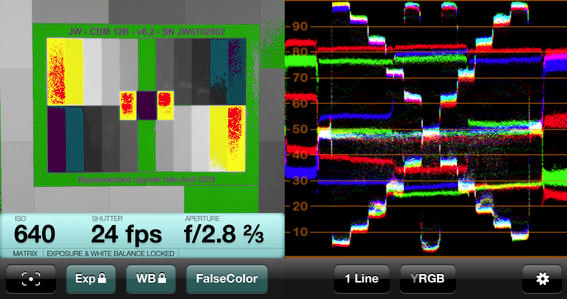 I tweeted this shout out to Adam and he teased an update that might be coming soon.

@editblog #CineMeter for editors? Weird… but wait ’til they see version 2! 🙂

I was surprised how many camera-based production tools were featured. Goes to show that a lot of editors don’t just edit anymore.

This little $150 package (that’s a B&H price) is a small LED light with an iPhone app to control things like color and intensity. I don’t do a ton of shooting but playing with this thing made me really want one. 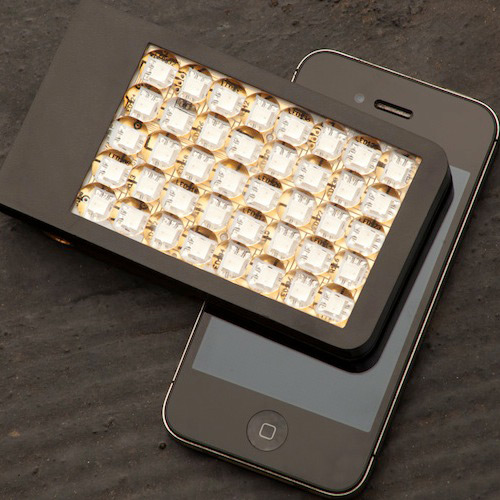 If you have had your Mac for any length of time then you probably have some duplicate files somewhere on your hard drive. Yes you could tediously search through your drive to find those duplicate files or you could let something like Duplicate Detective do it for you (App store link). 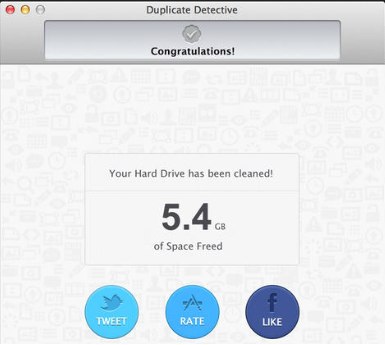 There’s a long bullet list on the App Store so give it a read for more info. You do need Mavericks to run this app. It might be the small SSD drive’s best friend.

If you’re shooting outside then rain can be the enemy, unless of course you want it to rain. Dark Sky is a $4 iPhone app (iTunes link) that will help show when and where that rain might come. Couple this app with a good meteorologist and you just might have something. 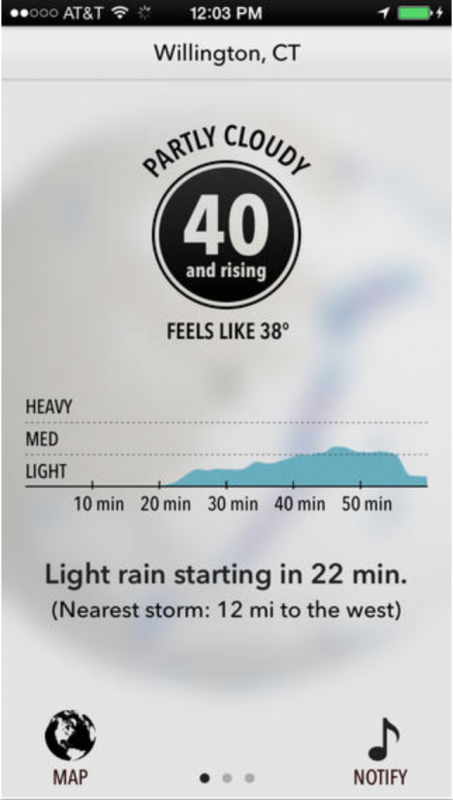 A better description comes from the Dark Sky website: “Dark Sky uses state-of-the-art technology to predict when it will rain or snow — down to the minute — at your exact location, and presents it to you alongside the most beautiful weather visualizations you’ve ever seen.” This thing really does look gorgeous.

The magic of iPhones, the internet and smart individuals brings Vyclone – though they could probably use a web designer on that site. This description of the app came from the iTunes link: “ Vyclone automatically and intuitively syncs video taken on your phone with footage taken by others around the same happening. You just shoot something and upload; Vyclone does the rest. Within moments, Vyclone begins creating one seamless video with everyone’s content mixed together. So why take static photos or single videos by yourself when you can co-create for the bigger picture? Vyclone, now that’s really social media!” The app is free. Reading the What’s New in Version 2.10.1 on the app store might make you not want to use the app yo. 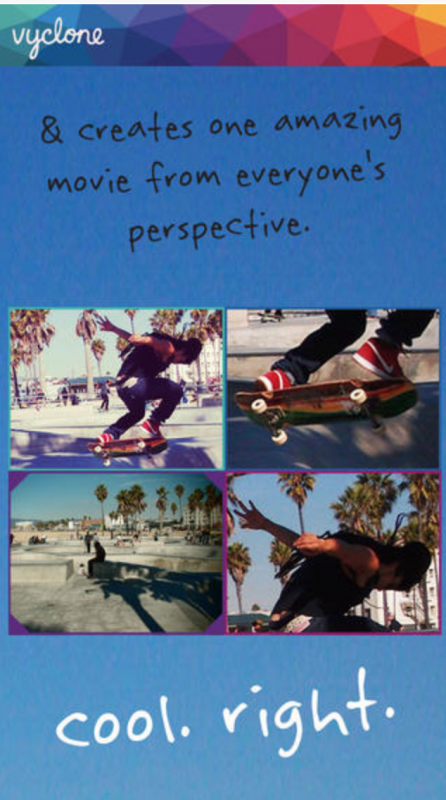 How’s that for a nice screen grab to promote your app!

The videos on the Vyclone website aren’t terribly inspiring but overall it seems like some cool technology. Here’s a video that 8 people shot together. It’s also available for Android and Windows Phone.

It’s not all apps as FreeOneHand is an iPad case, stand and handle all in one. It’s “The Most Comfortable Way to Hold & Use Your iPad.” It’s $40 and comes in quite a few colors and styles. Apparently it’s also coming for the iPad Mini. 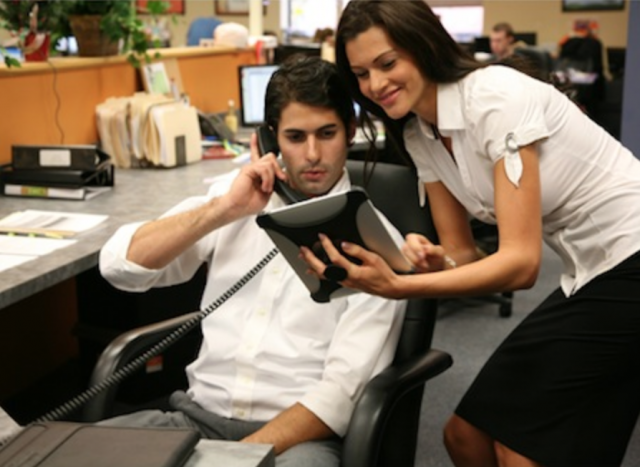 Don’t those office drones above look happy? This could be a really great tool if you’re using your iPad in some type of on-your-feet environment as the handles makes it very convenient to both hold toward your person and present to someone else.

Filmmakers need to design shots and something like Shot Designer moves a step beyond storyboards and sketchpads. It’s available for iOS, Android, Mac and PC. It’s free to use on a “single scene at a time” and a $20 purchase adds a ton of pro features. 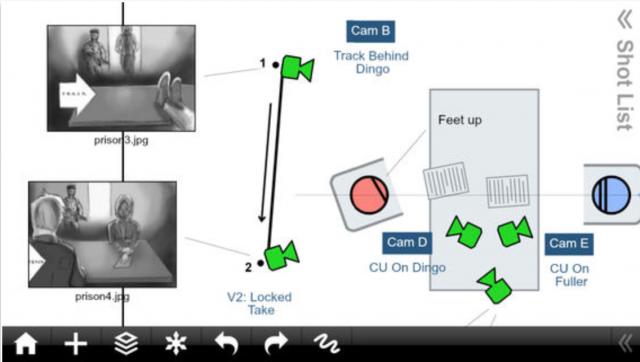 This thing really looks like it could be the perfect filmmaking tool so rather than me typing about it head over to the videos page and see it in action.

Editors sit. A lot. While some of us get to stand at our standing desks we probably all need more fitness in our lives so we don’t die from sitting too much. What better way to get some exercise than run from zombies with a $4 app? Zombies, Run! might help with that.

If this thing seems silly then you’re thinking the same thing I did. Then I thought how much I really don’t like to run and the more I thought about it the more fun something like this seems. I can’t wait to try it this spring. It’s available for iPhone and Android devices.

There was also mention of another fitness app called Couch to 5K. That one’s design to take you from the couch to running a 5K. Duh.

If you need help with accounting and tracking your expenses then the free web tool Expensify might help. It’s expense reports that don’t suck. It’s not only a website but mobile app help with tracking all those things that go into expense reports. It’s available for most every mobile platform.

There’s both business and personal versions and it seems quite amazing to be free. It took some digging around the Expensify website but here’s some info on pricing if you choose to move beyond the freemium model.

My pick for the Gearheads session was Path Finder. This $40 application is a replacement for the Mac Finder that adds an amazing level of functionality on top of the sadly underpowered default Mac Finder. Yes, Mavericks added tabs and tags to the Finder but Path Finder had this long before and still does so much more. Check out the developer’s YouTube channel for a lot more on Path Finder.

I don’t think I use even half of the power of Path Finder so if you try it out there’s really a lot to dive into. My favorite (and most used by me) features are the recent folders list, batch renamer, split window panes with one button copy and move commands, favorites and the always up if you want it Preview window.

There’s also this cool thing call a Drop Stack that lets you collect files from all around your system and copy, move, compress and/or email that collection of files.

Digitalcanvas.co was mentioned not as a website that provides a service like Expensify but more for inspiration. It’s “A SHOWCASE OF INNOVATIVE VFX, EDITING, AND MOTION GRAPHICS CONTENT.”

This site is supported by GenArts and you can lose a lot of time browsing around it.

Gearheads. This is going to be a fun #EditorsRetreat session pic.twitter.com/DAhQWQdaGr

I hope there is a 2015 edition of Gearheads at the 2015 Editors Retreat. And I hope I’m there in person.