A few fixes for FCP, Motion, Soundtrack and Logic 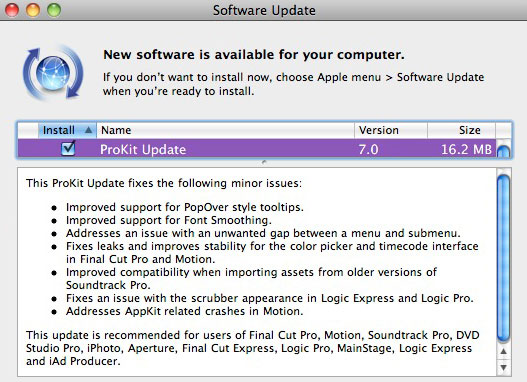 Yesterday Apple pushed out a Pro Applications update in the form of ProKit 7.0 for Snow Leopard 10.6.6 and later. It doesn’t look to be anything more than some minor issues with FCP, Motion, Soundtrack Pro and the Logic apps. This one: “Fixes leaks and improves stability for the color picker and timecode interface in Final Cut Pro and Motion” intrigues me a bit. I installed yesterday and so far all seems well. It’s available from the above link or via Software Update.

Here’s the full bullet list of changes from the Apple support page:

• Addresses an issue with an unwanted gap between a menu and submenu.

• Fixes leaks and improves stability for the color picker and timecode interface in Final Cut Pro and Motion.

• Fixes an issue with the scrubber appearance in Logic Express and Logic Pro.

One comment on Twitter says that “#Prokit7 lets me to open mpg422 streams in Compressor, before the only thing that worked was FFMpegX.” If that’s something that you’ve needed addressing then this update might be for you. Perhaps the best thing is that the update happened at all since we are getting closer to the release of Final Cut Pro X. I do hope Apple continues to update, improve and bug fix Final Cut Pro 7 for quite some time as many of us will continue to use it. Is there something in this update related to FCP X running on Snow Leopard? Who knows.

As with any update don’t install it unless you’re in between FCP projects and have time to troubleshoot any potential issues that arrise. General consensus after a day being available has been that the update hasn’t caused any major issues but you’re responsible for your own system. I’m sure ProKit 7 is something iAd Producer users have been eagerly awaiting!