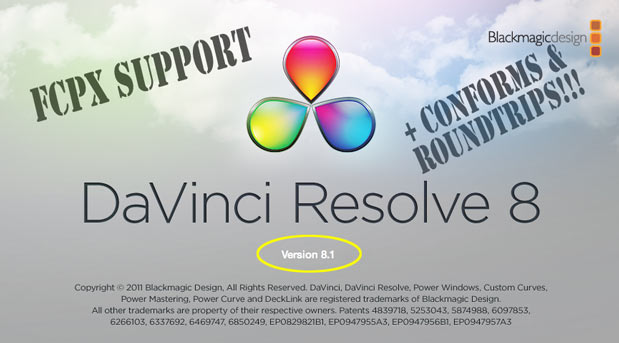 The engineers over at Blackmagic Design continue their mad dash to update and upgrade DaVinci Resolve. The end of last week saw the release of Resolve 8.1. This comes after the huge 7 to 8 upgrade we saw earlier in the year but this incremental update to 8.1 adds some pretty significant features itself. Probably the headline feature is support for Final Cut Pro X’s new XML format. Secondary to that but equally important to those using Resolve in a grading facility is better Avid Media Composer roundtripping and some FCP7 XML updates. Plus you can even use Resolve 8.1 as a go-between to move from FCPX to FCP& or maybe Media Composer to FCPX! That is if that need ever really arose. Read on for a list of changes and some experiments with roundtripping.

There’s a lot of changes to Resolve 8.1 listed in the read me file (Plus you can grab the full Resolve pdf manual here):

• Avid AAF export for simplified AMA round trip with handles

• Hover over node to reveal list of changed items

• Save EDL of missing clips

• Copy and paste node metadata between nodes including dynamics

• Interpolation of Custom curves and HSL curves within dynamics

A lot of these changes look to be conform related to make it easier to bring jobs into Resolve for grading. The Blackmagic engineers made some big strides in making conforming a lot easier with Resolve 8 and they continue that with 8.1.

As I mentioned above one of the headline features of 8.1 is support for the new Final Cut Pro X XML format that allows for full roundtripping. That’s from FCPX to Resolve and back to FCPX. This has been possible with both FCP7 and Avid Media Composer for some time (though it’s made easier in 8.1) but this is one of the first applications to support FCPX roundtrips.

After rendering export your flavor of choice to complete the roundtrip.

One interesting side note that came about as of this 8.1 update is that post guy Mathieu Marano discovered that you can use Resolve as an intermediate step to move an edit from Final Cut Pro 7 to Final Cut Pro X. This was a bit newsworthy as most people know there’s really no easy way to go from FCP7 to FCPX. The other direction is getting its own translation app in Project x27 but as of this writing Cat DV seems to be translating from FCP7 to FCPX. There will be better ways to do this in the future, whether Apple does it or someone else.

Mathieu posted a video about this roundtripping into and out of Resolve 8.1.

This got me thinking about other roundtripping options including Avid Media Composer. I did a few tests of my own with a simple edit: a few cuts, a dissolve, a second layer and a constant speed change. Here’s a few images that reflect the results.

This is an edit from Final Cut Pro X conformed in Resolve 8.1.

The same edit round tripped back to FCPX.

This is the FCPX edit, graded in Resolve and then imported from Resolve into Final Cut Pro 7. It almost worked perfectly but instead of putting in a Cross Dissolve it added a “Black Hole” transition.

For the Avid tests I AMA linked to native H.264 7D media to build the edit. After than an AAF export out of Media Composer conformed perfectly in Resolve 8.1. Then I exported the native DNxHD mxf media out of Resolve and I placed that into the Avid MediaFiles folder on my media drive so Avid could index it properly. Remember that Avid MXF support is an extra purchase for Resolve in the Avid File Support option.

This was an Avid Media Composer edit conformed in Resolve 8.1.

That same edit roundtripped back in to Media Composer.

What about Avid to FCP and vice versa?

At this point the question I had was could I get the Media Composer edit back into either version of Final Cut Pro or FCP back into Avid. I tried this test by exporting Quicktimes from the Resolve Render instead of mxf files. It was as easy as exporting an XML from the conform page. The results:

The Avid edit then imported into FCP7 after exporting an XML from Resolve. The dissolve actually came in as the proper cross dissolve. 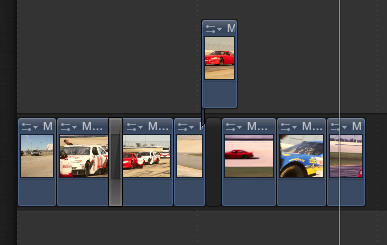 Here’s that same edit from Avid to Final Cut Pro X. That might be a first! 😉 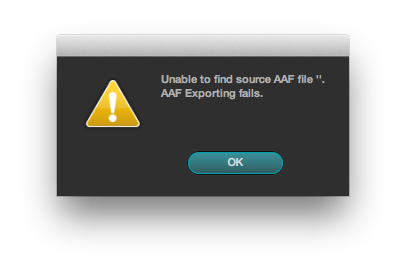 I was unable to go from FCP to Avid via Resolve as Resolve was unable to export an AAF file for Avid conforming when it was an XML that came into Resolve from FCP. This is because Resolve modifies an existing AAF for AAF conforms where it generates a brand new XML for an XML workflow. Might we see this changed in future versions? Perhaps.

All of these roundtrips from one application to the other might not be useful in everyday workflows but it’s nice to know they are there in some capacity if need be. If you’re a Resolve-based facility providing full grading services then just being able to provide such a workflow could come in handy on occasion. As with any new workflow be sure and test it out before offering it to clients as your mileage may vary, especially with a more complex timeline. Also, these conforms were video only and not concerned with audio. You could always export a reference track of audio to then import into Resolve. If roundtripping to a NLE with actual tracks (Avid, FCP, Premiere Pro) then it’s easy to just paste the audio back in. It would take a bit more work in FCPX depending on how you prepped the timeline. Yet another plus for working with real tracks!

These were rather simple edits that didn’t try to test the limits of what the roundtripping workflows will and won’t translate. All the XML and AAF conversions aren’t a simple thing. In fact, compare the size of the different lists that went back and forth during the roundtrip tests. You can see the AAF files are much larger so there’s definitely something going on inside that thing:

The smallest of these lists are the FCPX .fcpxml lists. The Avid-friendly .aaf files are much larger. My understanding is that AAF files are much more difficult to work with. Maybe someone smarter than me will explain the difference in the comments below.

P.S. What about Premiere Pro?

I didn’t want to leave Adobe out of this test so since Premiere Pro supports both Avid AAF and FCP7 XMLs I thought I’d try to conform the Resolve grades in Premiere Pro 5.5 as well.

This conform was from Final Cut Pro X to Resolve, then a FCP7 XML export out of Resolve, imported into Premiere Pro. It looked good.

This conform was the edit exported from Media Composer, conformed in Resolve then opening the FCP7 XML from Resolve into Premiere Pro. It was accurate as well.

While PPro will open an Avid AAF file it wouldn’t conform the Resolve / Avid AAF grade as that was referencing the Avid DNxHD mxf files generated in Resolve. PPro isn’t able to playback that particular flavor of media.

That’s enough importing, exporting and conforming to give anyone a headache. If you’ve made it this far then it’s time to go outside.