You may need an iPad but there’s some good stuff here. 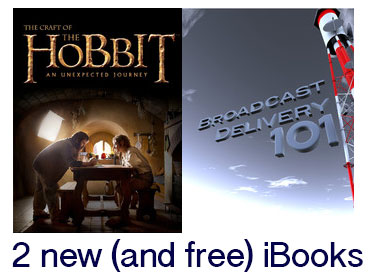 If you’re a fan of the iPad then you’ve probably heard of iBooks Author, Apple’s electronic book authoring application that allows anyone to author and publish an iBook. The downside is that it’s mainly limited to the Apple/iOS world but the upside is we get cool free iBooks like The Craft of The Hobbit, An Unexpected Journey iBook from fxguide and Broadcast Delivery 101 by Craig Russill-Roy.

The Craft of The Hobbit, An Unexpected Journey 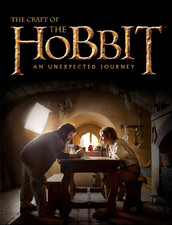 If you’re a fan of movie making of books and visual effects how-tos then this new 85 page iBook (it’s 1001 MB in size) from the folks over at fxguide is full of fantastic information on the making of The Hobbit. iBooks aren’t new to fxguide as they published a great one about their short Moving Day. They obviously did something right to get the opportunity to publish this current iBook about The Hobbit. 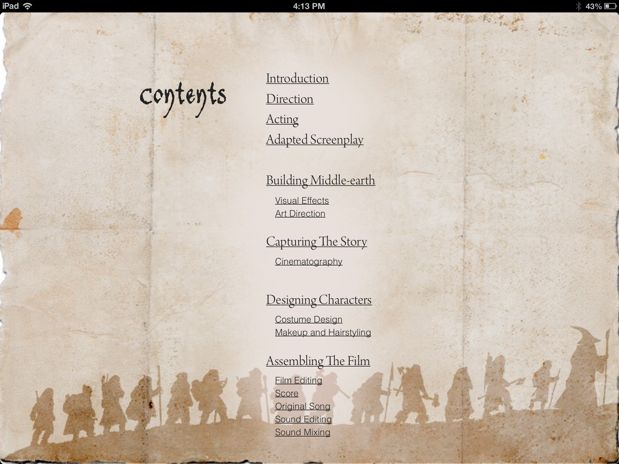 A look over the contents and you see most aspects of the filmmaking process are touched upon.

It’s important to note that The Craft of The Hobbit, An Unexpected Journey was produced for Warner’s award campaign season as there’s a lot of For Your Consideration pages throughout the book. But there’s also sections that touch on most all parts of the filmmaking process from writing, directing and acting all the way through visual effects, editing and audio. It really is a journey through the process of making that movie. Since The Hobbit was shot in both 3D and at 48 frames per second (feel free to join in the discussion of that on PVC here, here or here) there’s a number details here and there in the iBook about both of those technical hurdles.

There were two main things that I really enjoyed:

The first were the different videos that showed how different shots were built using the different layers and pieces of the visual effects. It always amazes me how many separate elements often go into one single shot so I’m a sucker for those videos that show each shot build layer by layer. There’s quite a few of those in the iBook. 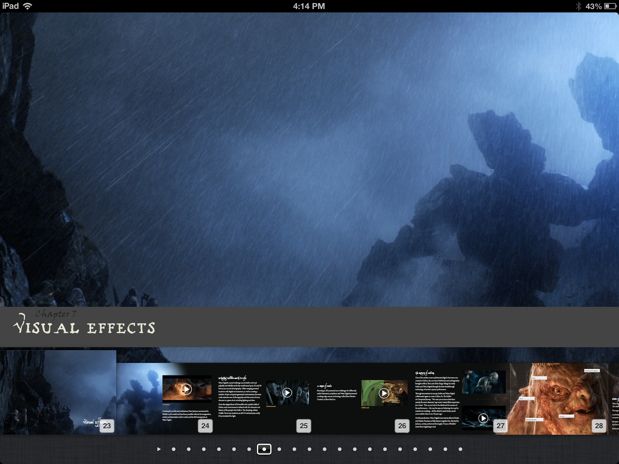 The Visual Effects chapter includes a lot of embedded videos.

The second thing I really enjoyed was the interview with editor Jabez Olssen. Since editors are often the unsung heroes of any filmed production it’s nice to see and hear an editor talk about a film like this. Watching that interview left me with a lot of questions I’d like to ask him. 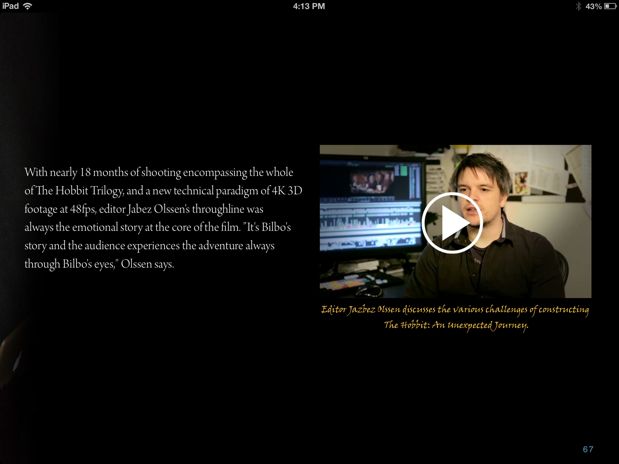 Thanks to the authors for including the rather lengthy interview with the film’s editor. 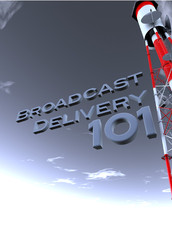 While fxguide’s Hobbit book took a lot of time and probably a good bit of money on the part of Warner Brother’s Pictures to produce it’s the dude with an idea iBook that really speaks to the format’s potential.

That dude is Craig Russill-Roy and his Broadcast Delivery 101 book (117 pages, 579 MBs) helps with just what the title says: delivering media to broadcast. Craig also has a companion website called … wait for it … delivercommercials.com. It’s pretty obvious what Craig is all about. 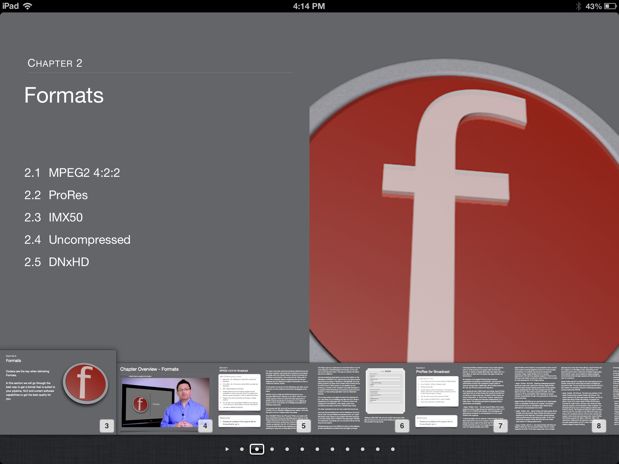 Formats is just one of the topics covered in a dedicated chapter.

This iBook is an informative read that’s divided into chapters ranging from formats, to editing systems to slates to clearance to delivery methods. And there’s a lot of chapters in between those that cover a wide range of information. Like all good iBooks Broadcast Delivery 101 includes lot of video in addition to text and images. Many of the chapters have embedded videos which help illustrate an idea, especially in the Editing Systems chapter. 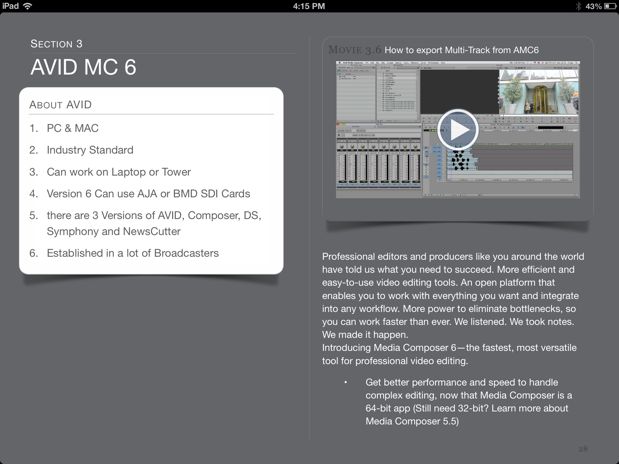 Avid editors might be interesting in exporting multi-track audio from Media Composer.

If there’s one thing the Broadcast Delivery 101 book could use it’s a bit more proofreading as there are a number of typos and grammar issues. For example, the NTSC HD 30 second Countdown movie that’s embedded in the American Slate – Standard Definition section is neither HD or 30 seconds. And some of the information sounds like it was provided by PR folks, like in the Delivery Methods chapter, but there is some very useful info in this book. I can attest to how difficult it is to proofread your own work so maybe Craig can get another set of eyes on his next iBook. The nice thing about iBooks is they can be updated and Craig’s book has already had an update with spelling corrections. 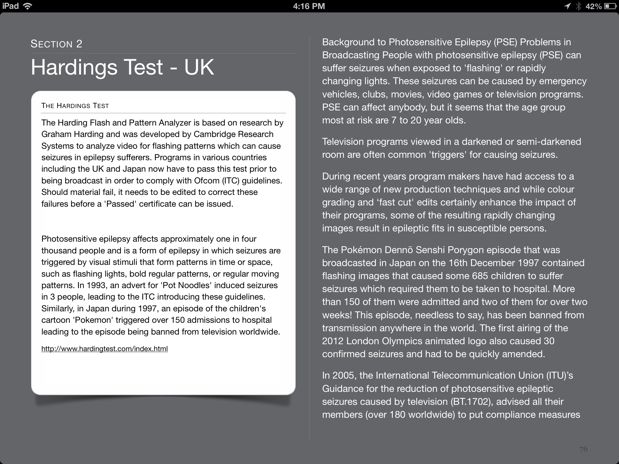 While the book has a lot of specifics for the UK, readers in the USA will also get some useful information.

But it is free and if you’re new when it comes to delivering jobs to broadcast (and in the DSLR world there are a lot of people who have never delivered to broadcast) then the free Broadcast Delivery 101 might be a very helpful read.