A simple message, less than 140 characters, is sent out to followers around the world and within hours, perhaps minutes, more than 100 million people have been mobilized to act. The message might instruct those who read it to look at a certain website, protest at a designated time and place, or perform any number of other acts, promoting an agenda or cause whose intentions may be either benign or downright evil. But whatever the message, whatever its agenda or intentions, the message has been sent and the world is shaken by its power. A tweetbomb. That is what this message is called. Although we haven’t seen one yet, you better believe it is coming, and it is coming soon. Welcome to the era of Twitter, an era of mass communication where a single individual or institution can mobilize massive numbers of people as never before. 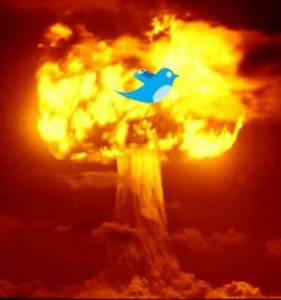 Thereonce was is a Twitter account @tweetbomb that used a viral technique to ‘bomb’ an increasing number of followers with a message once a day, but this was not a true tweetbomb. It was simply an interesting exercise by the same name, quickly shutdown by Twitter for violating terms of service. Meanwhile, as various famous tweeters are now eclipsing the milestone of one million followers, the prospect of a true tweetbomb looms ever closer.