Way back at some point in 2012 I happily pledged some bucks to a Kickstarter campaign to try and design the ultimate iPad control interface for the non-linear editor. I was no stranger to these things as I have tried many of them. CTRL+Console looked like it might finally be the one. It has since shipped. It’s pretty damn good and the best thus far. I just don’t use it much … yet.

I’ve been dying to find the right iPad app to compliment the desktop NLE. I’ve tried several of them and none have really been any better than the keyboard. I had high hopes for CTRL+Console and I still do. I wanted to see it funded so I wrote about it twice and pledged at a level that would give me early access to CTRL+Console as well as the ability to provide feedback. Jeff Chow, the app’s creator, was great in communication and very open to criticism of the product. We sat at an NAB 2012 dinner where I gave him feedback in person with an early version of CTRL+Console in hand and some of that feedback seemed to be right there in the app when it shipped. (App Store link)

Now that CTRL+Console has shipped anyone can download the app and buy the consoles they want. A Quicktime controller is free while controllers (not editing consoles) for Final Cut Pro (X and 7) and Adobe Premiere Pro are $5 and available from an in-app purchase. 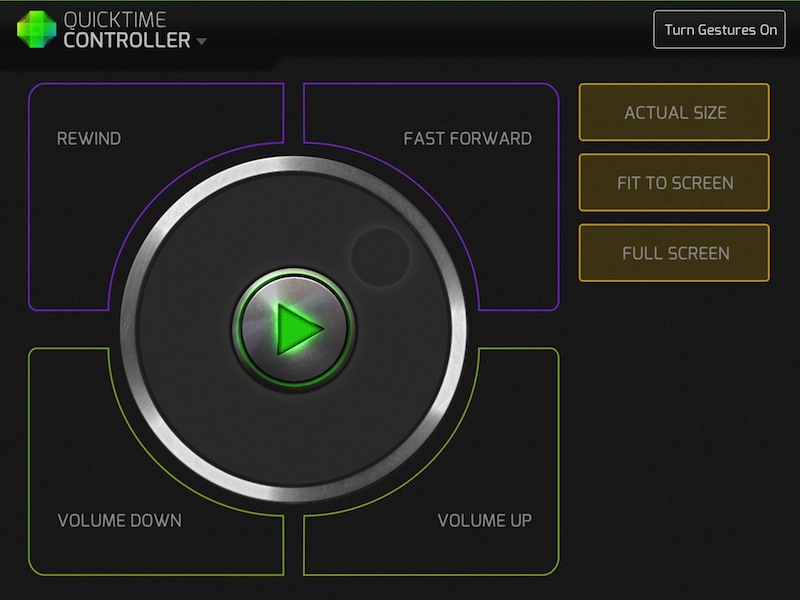 The QuickTime Controller is the free offering so you can get an idea of how CTRL+Console works.

Since you’re most likely an editor of some sort if you’re reading this blog then you’ll most likely want one of the FCP or PPro EDITOR consoles and those will set you back $30. Hang on before you complain that they are too expensive. What’s missing is Avid Media Composer support but that’s most likely coming. 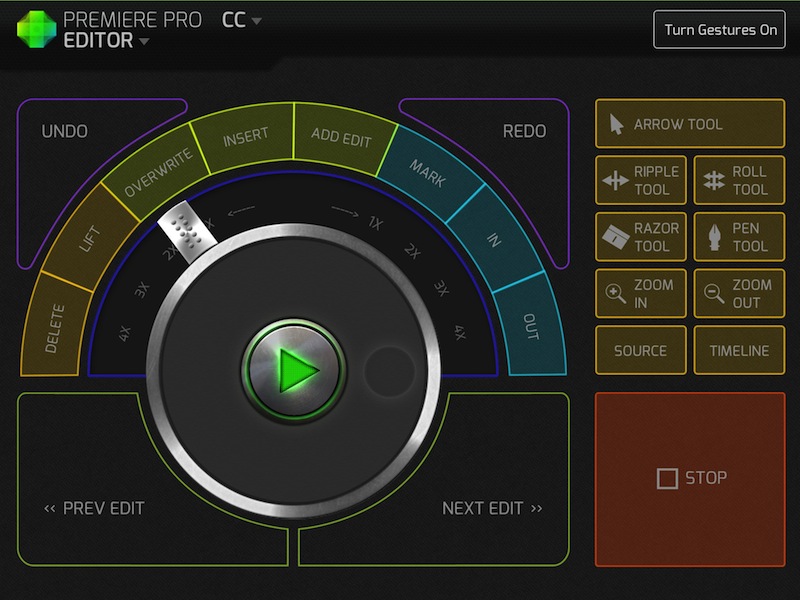 The Adobe Premiere Pro edit controller has a number of buttons, commands and tools all pre-built into the app.

To make the iPad communicate with the desktop computer and the NLE you have to download a support app onto the Mac. There is also a version available for Windows. That’s not a big deal as most all these iPad apps that compliment the desktop require a helper application.

You have to download and install the CTRL+Console desktop app to communicate with the iPad. Overall communicate between the iPad and the desktop is fast and responsive.

Back on the iPad the app is a gorgeous thing to behold. You’ll instantly recognize the large jog/shuttle wheel as these things are the centerpiece of most NLE iPad control surfaces. On the one hand, this is what most anyone probably excepts in an NLE iPad control surface but on the other hand, I don’t know how useful that part really is. I don’t use them much on my Contour Shuttle Pro and I don’t use them much here either (maybe that’s just me). What is nice about that jog/shuttle is how fluidly it works. The jog wheel spins just like a high-end hardware jog might spin and it is “weighted” in that a fast spin will see it slow to a stop. The shuttle control pulls forward and then springs back just like you would expect it to. 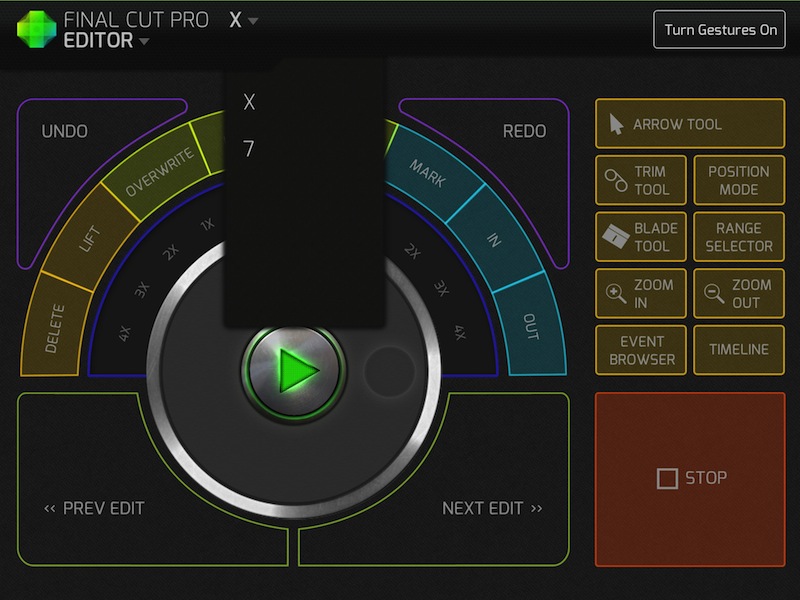 The Final Cut Pro console provides both a version 7 and version X option.

This type of feedback can’t be easy to make so that engineering might be part of what leads to the “high” price of the different consoles. But let’s be honest, if $30 is too much to pay for a professional tool that might help you while you’re making money then click on over to another review. While it would always be nice to try some kind of demo before paying $30 for software there are no demos in the app store so try the free Quicktime Player Controller to get an idea of how the app will work. What they need to do is add the shuttle lever to that one so you can get an idea of how that will work with the other consoles.

Using the app while editing

I’ve used CTRL+Console extensively with both PPro and FCPX. I like it, but I don’t love it. I’ve said many times that the problem with the iPad as a control surface is that you have to look down at the smooth glass screen too much to be sure you’re hitting the right spot and CTRL+Console is no different. The overall design does make a few of the buttons more useful than others as the big Previous Edit and Next Edit buttons are easy to hit … but not as easy as an UP and DOWN arrow on the keyboard. The big red Stop button is always within reach in the bottom right corner but so is your keyboard’s spacebar.

Things like the IN, OUT, delete and various edit keys that are located in a ring around the job/shuttle wheel seem to be in just the right spot but other than the novelty of using them they aren’t in any way faster than using the keyboard. Both the FCP and PPro consoles place tool buttons on the right side and while they are nice it’s so much faster to hit a button on the keyboard to get back to the Arrow tool. I’m sure you can see a pattern here … using the keyboard is just faster and if you can’t gain any speed in daily editorial tasks then what’s the point of an iPad control surface? Sure it’s fun to use but fun doesn’t help you bill more or get done faster. It does make tedious editing a bit more fun, I will admit that.

The buttons on the right do have a few useful things in that they can move focus from one window of the NLE interface to another and that can be nice as something like that usually requires a key combination. There’s also zoom in and zoom out buttons and they usually default to a modifier key as well. My most common use of zoom in and out seems to be to zoom the timeline so I’d most like to see the jog wheel of CTRL+Console have the ability to make a zoom. That’s what I’ve programmed my Contour Shuttle Pro’s jog wheel to do – zoom. I usually find I don’t need to jog the playhead since I can do that with JKL scrubbing or the left and right arrow keys.

And there are gestures

One nice thing that CTRL+Console offers up is the ability to use gestures instead of the button interface. A toggle on the screen changes to gesture mode. I may just be dumb but I always seem to have trouble remembering all the gestures I’m supposed to use in these iPad control surfaces so there is a handy text-based reference that can be turned on. 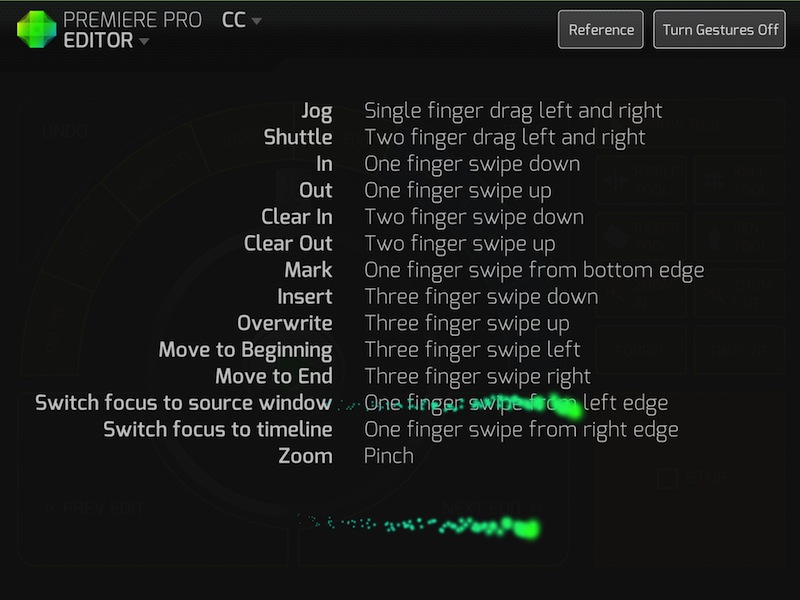 The gesture option is best used with the feedback from the light trail so you see exactly what input the app is receiving. Of course ideally you won't look down to see them but it help to get a handle on how to use the gestures or what the app is seeing if it doesn't respond as expected.

CTRL+Console has also implemented this little light trail thingy that visually shows what gesture your finger has done. That is a cool little feature and makes this gesture control option a bit more useable than it otherwise might be.

I think the jury is still out for me on gestures. A few of them come in handy, like the single finger jog, but overall I keep coming back to the keyboard. The two finger shuttle works but is a bit unpredictable when you know exactly what will happen when you shuttle via JKL on the keyboard. I’ve asked for gestures out of these types of tools for a while and have tried several of them but always come back to the keyboard. Maybe I’m just old. If you could customize the gestures to your own specific NLE commands that would be most useful.

Which brings me to the next topic …

What would really be nice is if CTRL+Console let the user map their own preferences to the interface’s buttons. This is something that developers have mentioned as a possibility in the future but I can’t imagine that is going to be an easy task. Do the button shapes and colors stay the same? Does the text on them change? Could they be mapped to just keyboard functions or menu functions as well? Could they be mapped to actions that require one or two modifier keys? I’m sure there’s a lot to consider.

That brings to what I’ve currently found to be the most useful NLE companion iPad all: Actions. It’s basically just a bunch of big, customizable buttons on the iPad. Simple, easy to understand and (most importantly) customizable. (App Store link) 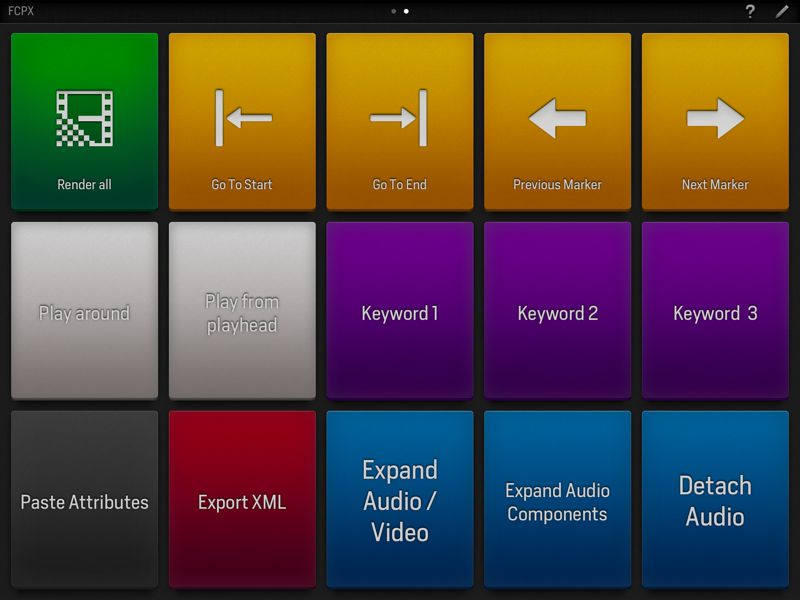 These are some of my favorites actions when cutting with Final Cut Pro X.

I’ve found this most usable in Final Cut Pro X where there are a lot of commands that require keyboard combinations. I’m not against keyboard combinations but FCPX uses a lot of them (and some are 3-key combos which are rather complex) that hitting the one button on the iPad is simply faster. I was constantly jumping between markers on a recent FCPX job so the one button Previous and Next Marker functions that Actions made possible means a fast FCPX is even faster.

CTRL+Console is a very well designed and well made app. I’d hate to discourage anyone from supporting a small, independent software developer but you don’t spend $30 casually, especially since you might want to buy both the FCPX and PPro controller. If you’re new to editing and these NLEs in general CTRL+Console might actually help you learn them and understand exactly what you and the NLE are doing. I would also never discourage anyone from intimately learning (and then changing) an NLE’s keyboard functions but the visual feedback of CTRL+Console will help the new editor grasp exactly what they are asking the software to do.

From the standpoint of just wanting to play around and have fun with an app while you’re editing then CTRL+Console is an easy purchase decision. It does make use the NLE a bit of a different experience. While CTRL+Console won’t make you faster (and in fact might slow you down a bit) it can make editing a bit more fun … at least for a little while. If you’re not on a tight deadline then it might just be worth the purchase. Where CTRL+Console will really become most useful is when we can custom map our own buttons. Then it'll be an app definitely be worth reevaluating.