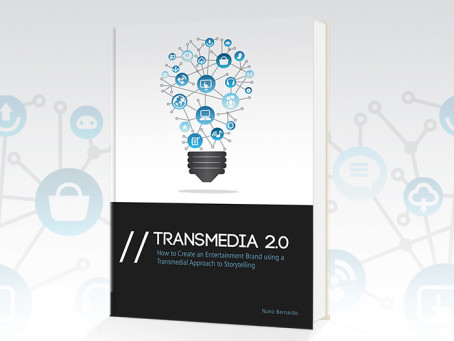 Nuno Bernardo, award wining and EMMY-nominated writer producer from beActive Entertainment, launches new Book about Transmedia Storytelling and how his approach can help producers to create strong Entertainment brands and valuable Intellectual Property. “Transmedia 2.0” is the follow up to the 2011 bestseller “The Producers Guide to Transmedia” and draws on Nuno Bernardo's experience of multiplatform storytelling and production.

Every TV and Film producer aspires to design an entertainment brand that can grow into a pop icon, a brand whose story world or hero has enough creative potential to power spin-offs and reboots, theme park rides and acres of merchandise. In “Transmedia 2.0: How to Create an Entertainment Brand Using a Transmedial Approach To Storytelling”, Nuno Bernardo shows readers how to use transmedia to build an entertainment brand that can conquer global audiences, readers and users in a myriad of platforms.

Inspired by Orson Welles radio play “War of the Worlds”, Nuno has being exploring new forms of interactive and immersive storytelling for the past decade. Using his unique approach to transmedia, Nuno has produced more than 200 hours of multiplatform content; from feature films and TV shows to mobile apps and books. His transmedia franchises have been adapted all across the globe, from the UK to China, conquering tens of millions of loyal fans and featuring in the world’s greatest film and television festivals along the way.

Through his own experience, Nuno has developed a step-by-step approach to building long-running multi-platform entertainment brands and loyal viewing communities. Now he’s sharing his knowledge with filmmakers, content producers for television, gaming and web, marketers and brand managers, audiovisual and media students. All of the aforementioned have one thing in common: they want to learn a trick or two about how to use stories and a transmedial approach to marketing and communication in order to attract worldwide audiences and users to their stories and products.

The “Transmedia 2.0” book analyzes how multiplatform storytelling and distribution can help producers to establish true entertainment brands and intellectual property. It also features a series of real and successful case studies discussing ideas and concepts of how transmedia can be key to promoting and engaging with audiences around a traditional TV show, feature film, game or consumer brand.

Nuno Bernardo set up beActive Entertainment in 2003 to explore new forms of interactive and immersive storytelling. In the last decade, using his unique approach to transmedia, Nuno has produced more than 200 hours of multiplatform content, from feature films and TV shows, to mobile apps, games, books and e-books. His pioneering work in this area has lead him to be guest and keynote speaker at International events such as the Toronto, Cannes and Venice International Film Festivals, MIPTV (Cannes), MEM (London), the Interactive TV Show Europe, Power to the Pixel, and many others. His transmedia franchises have been adapted all across the globe, from the UK to China, conquering tens of millions of loyal fans and featuring in the world’s greatest film and television festivals along the way. Nuno has been nominated for three EMMY awards, one Rose d’ Or and won two Kidscreen awards. “Transmedia 2.0” is the follow up to his 2011 best selling book “The Producers Guide to Transmedia”.