IBC featured no shortage of new products and updates, and the promises made about the impact such things will be able to have are as loud as they are pervasive. No doubt, some of them could positively impact the way professionals work, while others are nothing but hyperbole. Taking the time to dig with exhibitors at their booth is the only real way to tell which products are going to be worthwhile, but with more than 1,700 companies exhibiting at IBC, how are you supposed to find the time to do so?

fayteq showcased their product at IBC 2015

IBC featured no shortage of new products and updates, and the promises made about the impact such things will be able to have are as loud as they are pervasive. No doubt, some of them could positively impact the way professionals work, while others are nothing but hyperbole. Taking the time to dig with exhibitors at their booth is the only real way to tell which products are going to be worthwhile, but with more than 1,700 companies exhibiting at IBC, how are you supposed to find the time to do so?

Well, you can’t, which means you need to make choices around what you explore. After hearing what fayteq had in store for IBC, we decided we should take some time to find out more about their new product, fayIN, by watching a live demo and talking to the assembled team about how this product impacts the way in which users bring elements into their After Effects compositions. The product allows users to track objects automatically, precisely and quickly which represents a savings of time and effort that can be utilized elsewhere. 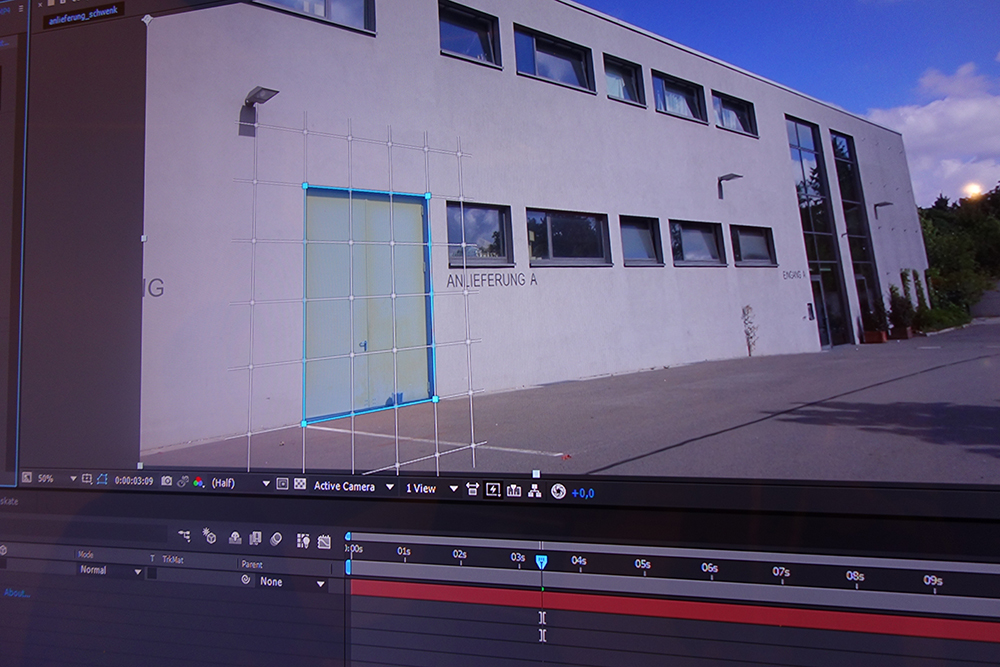 If something doesn’t look right in a finished video that piece of content is either ignored or denounced, which is why AE users spend so much time making sure everything looks the way it should. This process can often be a very technical one, and many users would rather be spending their time on something a bit more creative than tilt and z-positioning. The team at fayteq recognized this desire and worked to create a product which enables this exact thing.

“What excited us most is the high level of efficiency that fayIN enables,” Markus Kettler from fayteq told us. “The user masks an object once and fayIN tracks it all by itself through the whole sequence. You don’t have to change between software environments because fayIN is fully integrated in the Adobe After Effects Software, so it assimilates perfectly into the current workflow. The intuitive user interface makes it a seamless process in every way possible while no training is necessary.”

That ease of use is where the power of fayIN resides, and I saw that power on display during a live demo at IBC. Rather than spend a ton of time getting a .png file to look right in the After Effects comp, it was done in a few minutes, and the element was still completely pliable in terms of the size, shape and style. 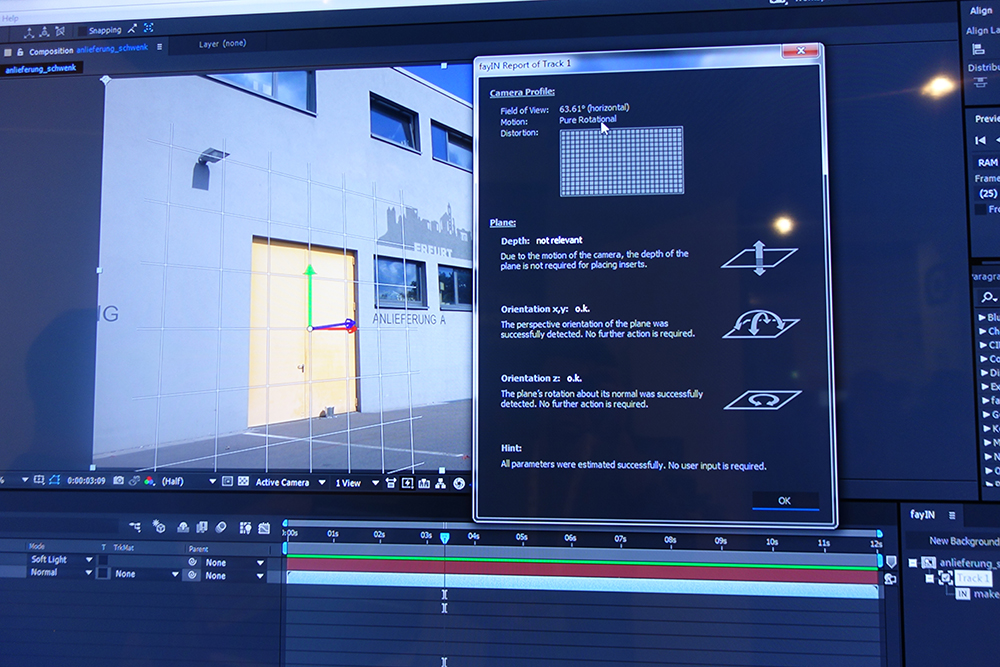 The fayteq team had a number of stock clips which they used for the demo, and these clips weren’t much more than a quick pan across a parking lot, or a shot of a woman picking up a box and walking across a path with it. The presenter utilized the fayIN window and created a shape to define where the element would be placed in the clip. After a quick processing queue, they were able to drop in any After Effects compatible format (video or image) that was quickly adjusted to look like a totally natural part of the environment. The team explained that the fayIN tracker creates an own 3D world in the background which enables the user to integrate multiple inserts for one track or completely change position and orientation of the insert without the need to track all over again.

“fayIN tracks with utmost precision in order to reduce further adjustments of the track to a minimum,” Markus explained. “Since fayIN is fully integrated in AE, users have recourse to all the layer effects available in the software and can apply them to the insert, blend modes, blur, shadows, etc.” Simply put, fayIN accelerates the process of integrating content in video footage. 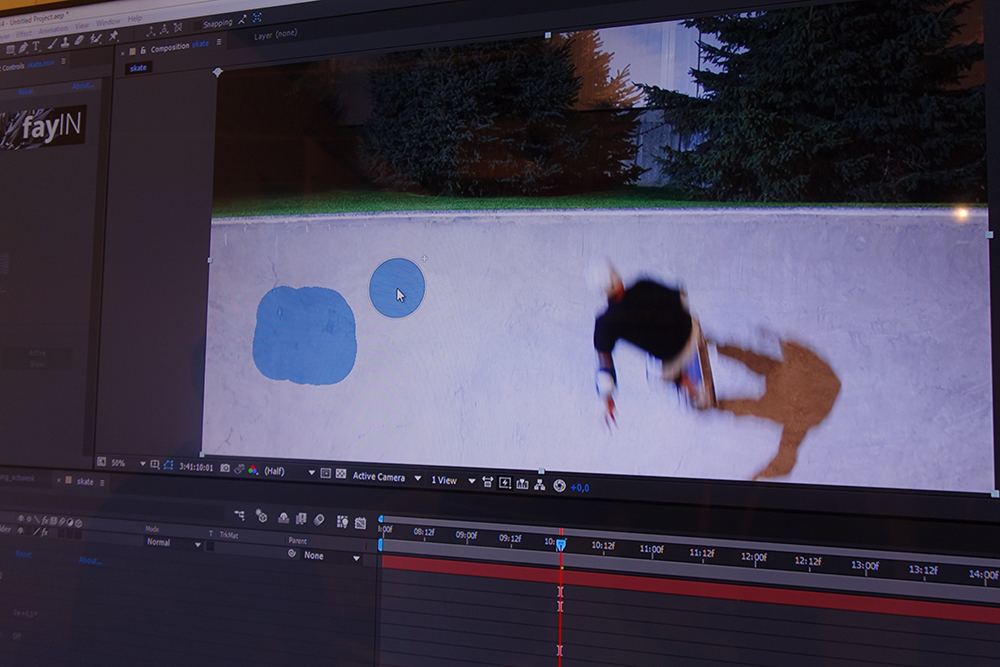 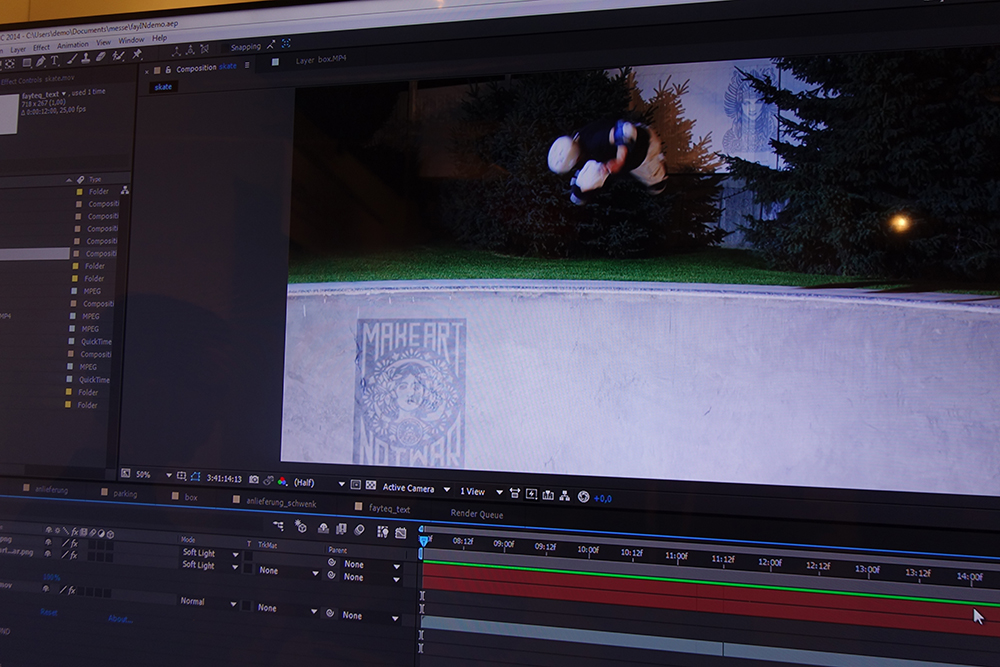 Their technology enables the fayteq team to connect with the API of most major platforms, which means there will likely be announcements about some other options for this plug-in very soon. Those upcoming developments extend beyond individual tools though.

fayOUT isn’t available at the moment, but it’s clear that the product will complement their toolset quite nicely. “Like fayIN, it will debut as a plugin for AE and will enable digital object removal from video footage with a high degree of automation comparable to fayIN’s workflow,” Markus said. “All you need to do is mask the object, let fayOUT automatically do the tracking and removal, render and you’re done!“

It’s interesting to think how such tools can impact the approach professionals can take in their work, but it’s also important to note the specific impact they can have. Regardless of how you use fayIN and eventually fayOUT, you won’t be doing anything with them that you aren’t able to do yourself if you commit to manually getting everything absolutely perfect with an outside object in AE. But is that the best use of your time and energy?

It was great to see how open the team was about what the tool does and doesn’t do, and the ways in which they’re hoping to see it utilized. The feedback they received at IBC will certainly go a long way in terms of how fayIN and other products are developed, but that communication isn’t limited to attendees of IBC.

“We love to get feedback,” Markus concluded. “Users can contact us via e-mail at [email protected] in case there are any questions concerning one of our products. And of course you can connect with us via Facebook, Twitter Instagram, and YouTube. We make it a priority to keep in touch with our users and see what they have to say about using our products to optimize our products continually”

fayIN isn’t going to redefine how you use After Effects on a creative level, but it could prevent you from putting in a lot of logistical legwork, which in turn represents time and energy that could be utilized more effectively elsewhere. That can be a chance to impact a project on a higher level, which ultimately can make it that much stronger and more fully realized.

The plugin is available at fayteq.com/fayin. But you don’t have to take my word about what it can do. Check out a couple of the tutorials below and see for yourself what this process looks like and whether or not it can both save you time and potentially redefine the way you’re integrating elements and objects in your video projects.

This tutorial shows the basic functions of fayIN: mask an object or area with the rectangular mask tool, track it and integrate new content.

Disclosure: This article was sponsored by fayteq