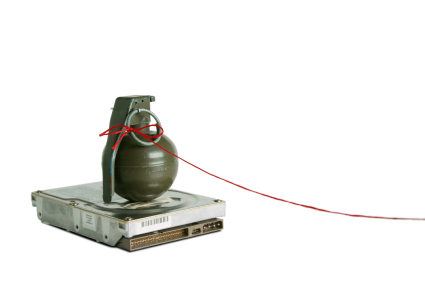 I think it’s time I face the honest truth in that I don’t do as good a job of backing up important files, projects and media on the computers in and around my life as I should. There’s a couple of floating firewire drives that I shuttle from computer to computer and then SuperDuper a clone or a disk image to that drive. And since a backup is only as good as the ability to get to it and restore it I try to send certain important documents offsite into the cloud. But it’s not with much regularity so I’ve decided to make myself a reminder to declare some point early in the month Backup Day!

This is not my original idea. Nor is the Backup Day! graphic you see above my original graphic. The whole idea of a monthly backup day reminder was from one of the original Internet “radio” shows Your Mac Life. The show was created by Mac guru Shawn King many years ago and was located here in Nashville for a number of those years. A friend of mine, J Curtis, was involved with the show as well and would place a monthly reminder on the Your Mac Life website using that graphic reminding people to “Back up all those important files, playlists, photo albums…” early in the month, every month. With that site in my RSS feed it was a great reminder to do just that … backup. I miss that reminder so as a service to all of those out there who need a backup reminder (and I’m one of those people) I’m going to attempt the same thing over at the original Editblog. Subscribe to the original Editblog RSS and bright and early every month (Gods be willing) you’ll see a Backup Day! reminder appear in the RSS feed.

Software for the backup process

There’s certainly a lot of software out there to help automate the backup process. My favorite app and one I’ve been using for a number of years now is SuperDuper! This application is easy to use, makes a fully bootable backup, includes a built-in scheduler and can perform a smart backup which saves time as it only has to backup files that have changed since the previous session. It’s available in a free version but for $27.95 you can unlock the power features like scheduling and the smart backup Smart Update feature. 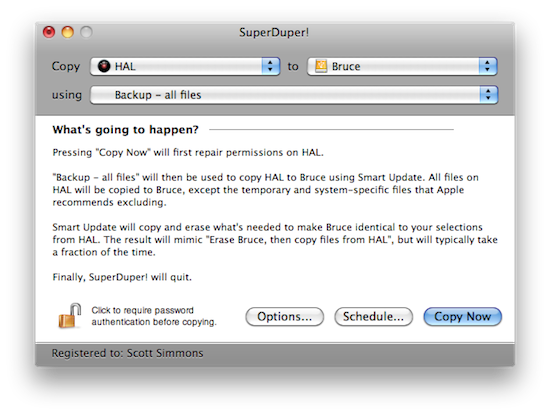 I can’t stress how important it is to have a bootable clone of your main system disk sitting around. If you wake up one morning to find your system drive has crashed and a client is on the way you can boot from a backup and get a day’s work done before troubleshooting and restoring.

Another option that has long been a favorite of the Macintosh community is Carbon Copy Cloner. This app is similar to SuperDuper! in that it can create a bootable backup of you system drive as well. The website uses the headings of clone, synchronize, schedule, backup and that’s exactly what you need a backup utility to do. Carbon Copy Cloner is free but the developer asks for a donation to keep development going. Try out a version and if you like it send the guy a donation.

These certainly aren’t the only solutions for cloning your system disk and backing up files. Apple now includes Time Machine built into the Mac OS. While it’s not a bootable disk it is a very simple and elegant way to recover old, lost or deleted files. You could even grab a Time Capsule that gives you a hard drive built into an Apple wireless base station for a very integrated solution.

Off-site backup is important as well

A discussion of good backup practices isn’t complete without talking about an offsite backup option as well. If something should happen to your home or office where your computer and backup drives are stored then it does you no good to have a backup as you can’t restore a drive to another computer if that drive doesn’t exist anymore. An offsite backup could be something as simple as taking a bootable hard drive home from the office in the evenings but a more feasible options is a “cloud-based” online backup system.

Macworld recently had a round-up of 7 popular online backup services that is a great read if you’re trying to decide on an online backup option. Their favorites were CrashPlan Central and Jungle Disk.

For my online backups I use the Apple Backup application that’s provided as part of a subscription to Mobile Me. The software isn’t really publicized by Apple but it’s available in the Software folder of a user’s iDisk. It’s not the most elegant application but it does provide easy backups to your iDisk with minimal headache. There’s template based setups for things like your Home Folder, personal data and settings, an iTunes library as well as the ability to choose custom files and folders: 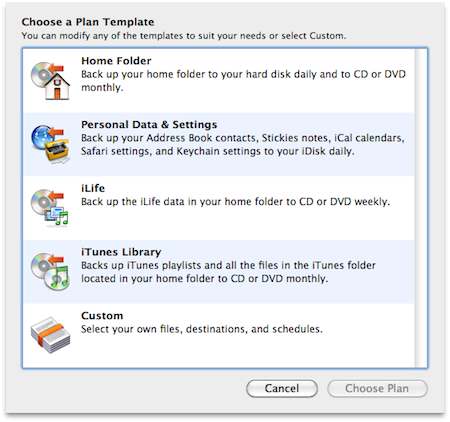 The various templates available in the Apple Backup application

And Backup doesn’t have to send it’s data to the cloud as it can burn DVDs or copy files to a hard drive. I use it’s scheduling feature to send a custom backup to iDisk. The biggest downside of a Backup to iDisk solution is the slow speeds of iDisk and Mobile Me in general. It would be much more pleasant is Apple could speed that service up considerably.

Just get some kind of backup solution

If you don’t have a regulaly shceduled backup soluction then I think it’s more important to get something in place to protect yourself from an inevitable hard drive disaster. It might be as simple as setting up a free Dropbox account and manually uploading important files. Once that’s in place then you can try the various local and online solutions as most apps and services provide some type of demo or free trial. No matter what you choose just get something in place as someday, unfortunately, you’ll need it.