Quick: what’s the difference between shutter speed and frame rate? You might be surprised that there are even a few camera operators don’t even know the answer to that one. Frame rate is the number of frames per second that are shot (or displayed). Shutter speed is the amount of time that the frame is actually exposed to light, and thus, the amount of motion blur contained in that shot.

It used to be that moving image cameras all shot film and contained no electronic shutter with variable speeds – just a rotating mechanical hemisphere like the one shown in the animation below. As the film advances behind the gate at 24 fps, the hemisphere shaped shutter allows light to pass through the aperture half the time, or for 1/48 of a second.

That doesn’t sound like much, but it’s plenty enough time to create the phenomenon of motion blur if either an object in frame or the camera is traveling fast enough.

There are those nowadays who would argue that motion blur is an undesirable artifact of this long frame exposure, in an era where electronic shutters are often capable, given enough light, of shooting 10, 20, even 50 times faster than that, all but eliminating motion blur.

That’s a good thing right? Some would say yes, absolutely, motion blur and slow frame rates are 20th century relics. Others would use a fast shutter only in specific cases, for dramatic effect (it has been used to create the hyper-immediacy of the Omaha Beach landing in Saving Private Ryan, the kinetic action of Gladiator, and many others, and is often considered a “contemporary” look because – and this is my opinion only – it acts like the eye of person in the fight-or-flight, hyper-aware adrenalin state in which the eye darts to every moving thing in view).

One thing it’s not is cinematic, if by “cinematic” you mean conforming to the standards, aesthetics and traditions of cinema.

Even your eye (or if you prefer, your optic nerve) creates motion blur. Stare at a spinning ceiling fan or other fast moving object that you can track for a while. Now follow an individual blade around with your eye as it moves (good optical exercise!). Notice a difference in clarity?

Simply speaking, cinematic motion blur exposes the image 50% of the time, so if you want your camera (or After Effects, or other animation program) to create a blur that looks filmic, you must choose a shutter speed that is (depending on how you measure it) 180 degrees, or 50% of frame rate. If you’re in After Effects, this means you go to Composition Settings > Advanced and set Shutter angle to 180.

If you also want the blur to be centered around the current frame in After Effects (blurring backward and forward from the current position equally) the Shutter Phase is always -50% of the Shutter Angle (or in this case, -90; in other words, the shutter opens 90 degrees before the moment in time of a frame, and stays open 90 degrees thereafter). 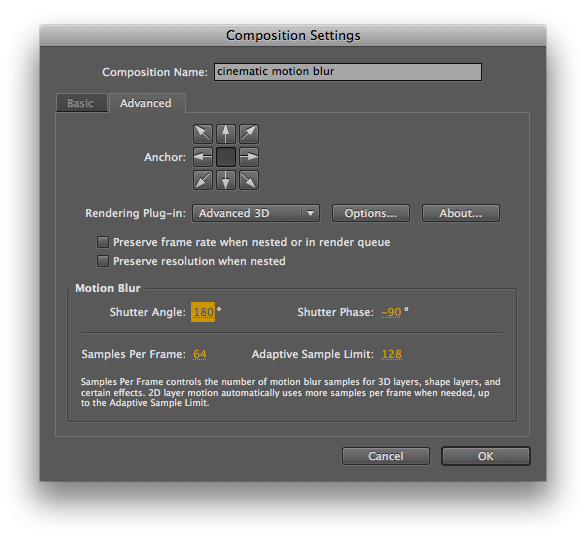 Of course it’s not as if 50% shutter speed is always what you want. I did an aerial shoot with a camera operator who was unclear on the difference between frame rate and shutter speed, and on that shoot, I had to pursuade him to raise the shutter speed to the maximum (1/1000 second on the HVX-200 we were using on this low-budget shoot) in order to compensate for how much we were getting buffeted around in the wind, without a gyroscope. Or a helicopter, for that matter.

Higher speed photography often does not look filmic even when slowed down simply because the shutter speed remains whatever it was shot at (and some cameras such as the Phantom use an intensely high shutter speed combined with, as the marketing literature puts it, “low-noise and unprecedented light sensitivity” to allow you to shoot at crazy-high frame rates without having to re-light the set).

As for frame rate itself – that’s a huge psychological phenomenon worthy of Freud and Jung, and fodder for a longer article (that is, if I’m ever brave enough to write it – and I’m only 50% joking).