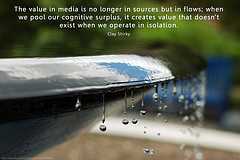 Thinking about cognitive surplus in the enterprise – confused of calcutta.

I likeClay Shirky. He doesn’t say a great deal, he doesn’t write a great deal, but when he does say something or write something, what he says or writes is brilliant. Clay is a web optimist, a class of person who believes that everything the web stands for can create value, and often new value. That the democratisation engendered by the web is a good thing; that communities can do good things that individuals can’t achieve in isolation; that the very concept of expertise is being redefined by the web.

Such views often tend to attract a lot of criticism, often from people threatened by the worldview he describes and ascribes to.

And so it was with his most recent book,Cognitive Surplus.Some people loved it.Some hated it. I for one really liked it, because Clay made me think about something normal and commonplace in a different way, by exposing a small number of ideas in an articulate and enjoyable way. [Disclosure: I count Clay amongst my friends; I count Cory, who wrote the positive review, amongst my friends as well. And I don’t know Nicholas Blincoe.]

I’m not going to review the book here, other than to say I really liked it. I’m sure that you can read many erudite and enlightening reviews elsewhere. All I want to do here is to share one idea that affected me deeply. And that was this: what I found really intriguing was not that cognitive surplus existed, but that it existed because people were doing less of something. In this particular case the principal activity that declined was that of watching TV, but what I found useful was the principle. That a cognitive surplus exists because time gets freed up, and if you have the tools and the motivation, then that surplus gets put to good use.