Using tilt/shift lenses for good instead of evil

I recently shot a museum project where the style required almost exclusive use of tilt/shift lenses. (We occasionally used a Zeiss 14mm prime, but that was rare.) It was a lot of fun, but I remember how tilt/shifts were a considerable mystery before I used them for the first time. Here’s the nickel tour of how to use these lenses.

This article is going to focus on using tilt/shift lenses with HD and video equipment. I’ll link to some additional reading at the end of the article that will provide important exposure compensation information for using them with film cameras.

I used the Arri tilt/shift system, which incorporates a bellows and three lens controls: horizontal tilt, vertical tilt, and lens center shift. We used the system on a Varicam with a Pro35 adapter.

This is how a normal lens works: 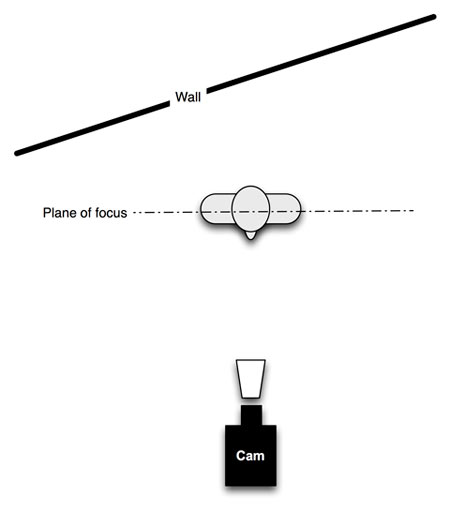 The field of focus is normally a plane (or, in some cases, a section of a sphere) perpendicular to the film or sensor plane. The distance of this plane from the lens is controlled by the focus knob. If you are trying to focus on two different objects at different distances from the film or sensor plane you’ll have to rely on depth-of-field or split diopters to pull this off.

In the example above, the wall to camera left will be more in focus than the wall on the right, because the left side is closer to the lens. The tilt/shift lens system changes all of that: 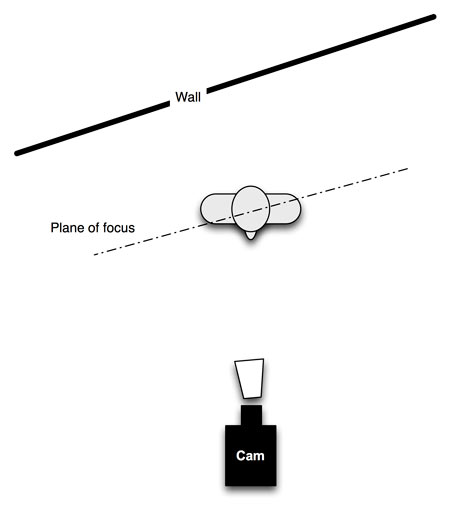 By tilting the lens you also tilt the plane of focus. Now the entire back wall is equally out of focus, something not possible with a standard lens.

You don’t have to tilt the lens very far to significantly change the plane of focus, thanks to something called the Scheimpflug principle. I don’t completely understand how that principle works, having gotten A’s in English instead of mathematics, but intuitively I grasp that the plane of focus pivots around a point where a line drawn from the front element of the lens intersects a line drawn from the film plane:

Tilt/shift lenses were originally developed to keep objects on a certain plane in focus, in situations where they normally wouldn’t be. For example, if a tabletop shoot required you to carry focus on a large number of food dishes from very close to the lens to quite far away, one solution would be to light the set to T16 or T22 in order to hold focus. Or, using a tilt/shift lens, it would be simpler to use less light and tilt the plane of focus forward to match the plane of the surface the dishes were sitting on. This doesn’t work well for moving shots, but for static shots it works startlingly well.

In my case, though, the goal was to throw objects out of focus that normally wouldn’t be, in order to focus attention to specific areas of the image. This requires doing exactly the opposite of what I described above, which is to tilt the plane of focus away from the plane that you want thrown out of focus: 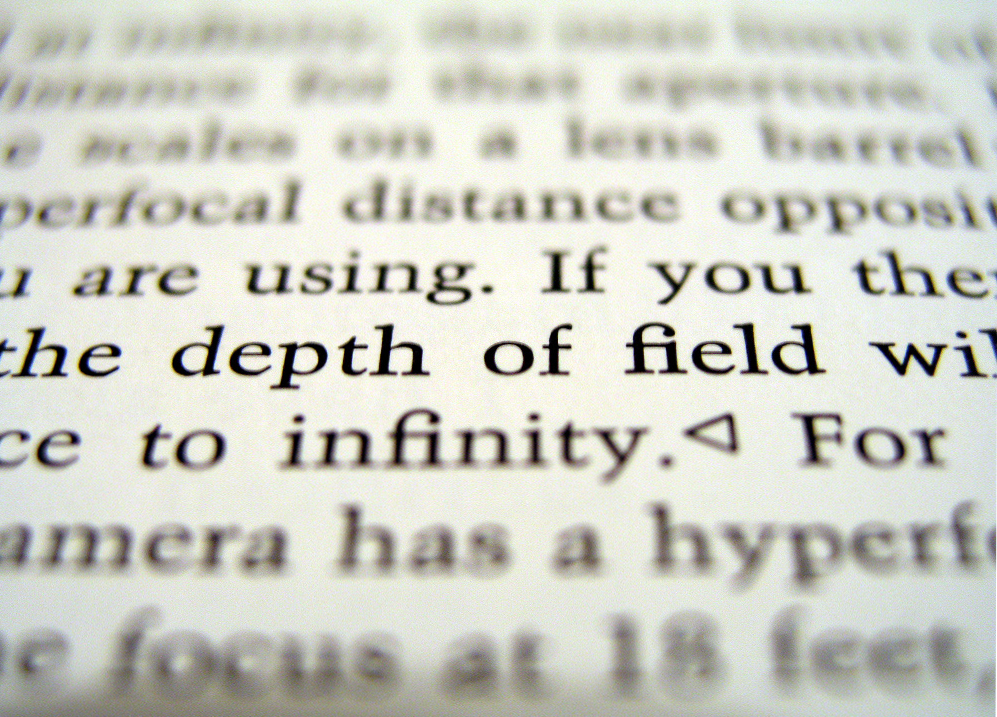 The trick is visualizing the plane of focus in front of the lens, falling where you want it to fall, and then tilting the lens toward that plane to keep it in focus or away from that plane to isolate one section of it. 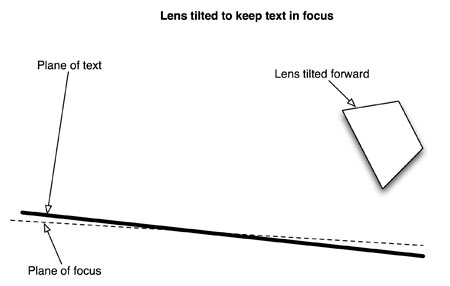 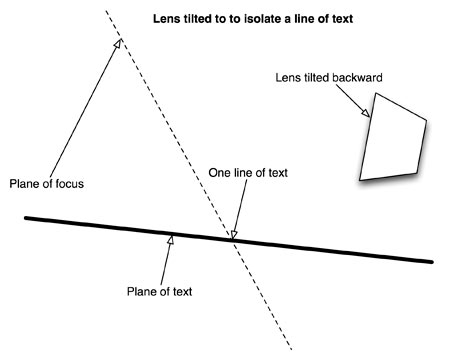 For my purposes, where I was isolating an object in the frame, I discovered that tilting the lens all the way to one side or the other worked the best. I turned the horizontal adjustment knob until I could see the rear edge of the lens move into the shot, viewed as part of a round black circle, and then I backed off until the black circle just disappeared. This left me with the most extreme plane of focus possible. On longer lenses this gave me a slice of focus that I could move through the shot, one side to the other, using the focus knob. Pulling focus became less about front to back and more about left to right, across the frame.

I had a set of three lenses: a 24mm, a 45mm, and a 90mm. (There’s a 110mm available as well but I didn’t have that on this shoot.) The 24mm wasn’t very useful for isolating objects in the frame because the overall depth-of-field was too great unless I was focusing on a very close object. The 45mm and 90mm gave me a very narrow slice of focus anywhere in frame that I wanted.

Horizontal tilt worked better than vertical tilt alone. Vertical tilt distorted faces by making them wider, limiting me to using horizontal tilt alone on interviews–which was fine, as I was able to create a vertical plane of focus that ran from the subject’s face down their body and dropped off very quickly to the sides. Vertical tilt, which creates a plane of focus running horizontally across the frame, was more useful landscapes. By combining the two of them I was able to rotate the plane of focus to encompass very specific areas of the frame, such as isolating a “Don’t Walk” sign in one corner of the shot while the pedestrians crossing the street in the rest of the frame were completely out of focus.

The best way to view the plane of focus is to turn the peaking in your viewfinder all the way up. As you turn the focus knob you’ll easily see exactly what’s in focus and what isn’t. Be wary, though, of your exposure–peaking makes the area in focus appear brighter and may give the false impression that your slice of focus is brighter than the rest of the image, when it really isn’t.

I didn’t find a lot of use for the lens re-centering option. This moves the optical center of the lens anywhere in the frame and is, in theory, good for straightening converging lines in landscapes or architectural work. I didn’t find it very useful for what I was doing so I didn’t touch it much.

Arri publishes some excellent instructions for using their tilt/shift lenses. If you’re interested in understanding this kind of thing then please do study the following PDF files: