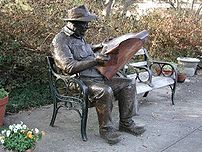 The Pew Project for Excellence in Journalism does a fantastic job reporting annually on thestate of the American news media. The Pew Project’s sixth edition for 2009 is no exception and provides lessons for all businesses on the importance of agility, adaptability, and competitiveness. The following paragraph from the report’sintroductionsays it all.

Journalism, deluded by its profitability and fearful of technology, let others outside the industry steal chance after chance online. By 2008, the industry had finally begun to get serious. Now the global recession has made that harder.

This is the sixth edition of our annual report on the State of the News Media in the United States.

It is also the bleakest.

I have friends in the businesses of radio, television, and newspaper. I take no pleasure with seeing people’s careers in jeopardy due to all the rapid changes taking place in their profession. What is truly sad to me is that the owners and managers of traditional media seemed to deny for too long what was happening. The event is even sadder because it seemedobvious to manyof us that look at industries from an information technology perspective where things would be headed.

Yet, I still think there is hope for those that remain in the field of journalism in the years to come. How ever bleak 2008 and 2009 is for journalism, I predict quality journalists will continue to make their mark in thenew media. Most successful entrepreneur will tell you that there is always opportunity to be found in chaos. Given the current chaotic state of the news media, I would venture to say that there is a bumper crop of opportunities just waiting to be found.