How to be an After Effects imposter for less than $20

Writing about anything on a forum with users as widely varied in their experience as provideocoalition is  a trick. Half the people will say “I never heard of that” and the other half will say – like the Geiko Insurance ads – “Duh! Everybody knows that.”

I have talked to several experienced editors in recent months that have not yet discovered the joy of After Effects and Motion templates. Like me, they are people with a minimal working knowledge of After Effects and do not consider themselves graphics artists, but when they saw a few of my recent projects they were stunned to find that I had done the effects work “myself.”

I have to use the quotes, because saying I did them myself, is a little like mountaineers that claim to have summited Mt. Everest. Sure, they climbed up there, but they wouldn’t have gotten there without a Sherpa.

My graphics “Sherpas” on more than one project were the relatively faceless masses of After Effects and Motion effects artists who hawk their wares on various template websites.

Let me backtrack a bit and explain. For customized graphics work, I have several skilled artisans that I turn to when I need something that looks awesome and I have the budget to pay for brilliant, customized work. I do some creative direction, provide some assets and then provide direction on revising the product until I have exactly what I want with minimal effort on my part, but a considerable outlay of my client’s cash.

On other projects, I still want the “cool factor” of awesome graphics, but the budget doesn’t have the wiggle room to pay my favorite vendors for their prowess. That’s when I turn to the World of Templates.

Some would argue that using a template is like using a pre-set for an effect. It’s a recipe for cookie-cutter projects that look like everything else. I would respectfully disagree. My reasoning is that my use of templates is only part of a project that is otherwise wholly of my creation. Secondly, the templates are designed to be customized to the point that they are unrecognizable, even if someone else uses the same one you do. And thirdly, I have only seen another project that had used the same template that I used once… and I doubt that if my client had seen the same project, they would have recognized that the graphics looked similar.

So let me first tell you about some of my favorite template sites.

The first one I ever discovered was motionvfx.com. This site has templates for Apple Motion, Adobe After Effects, Cinema 4D and also its own brand of very nice plugins. One of the things that first drew me to this website was the nice visual presentation of their products. 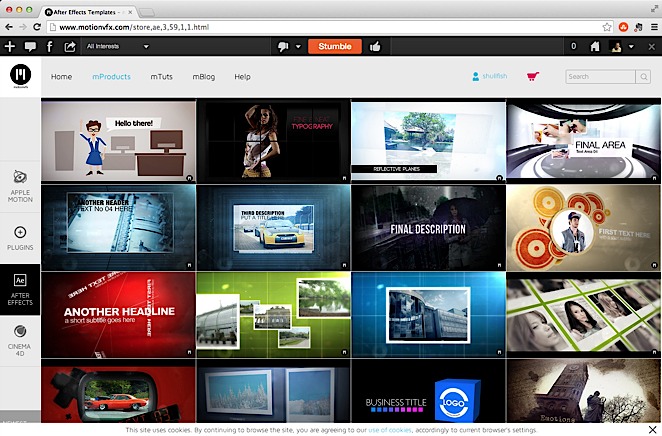 All of these After Effects templates are relatively low cost. About $50. When you consider that price and the amount of time it would take to even START to create a project like this, you can see the economics of using these templates even if you only use a few layers or a few seconds of the longer project. Most of these projects also have three distinct parts – the longer project, a short “Title” version and a lower third in the same style. The other thing that’s very handy for someone as “After Effects challenged” as me, is that many of the projects come with full-length video tutorials for customizing the templates, or at the very least a PDF tutorial explaining the layers and options for customization. 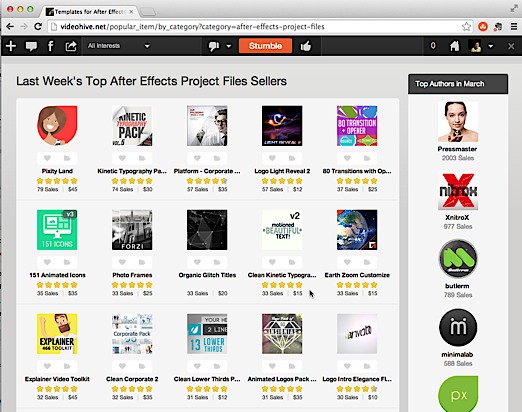 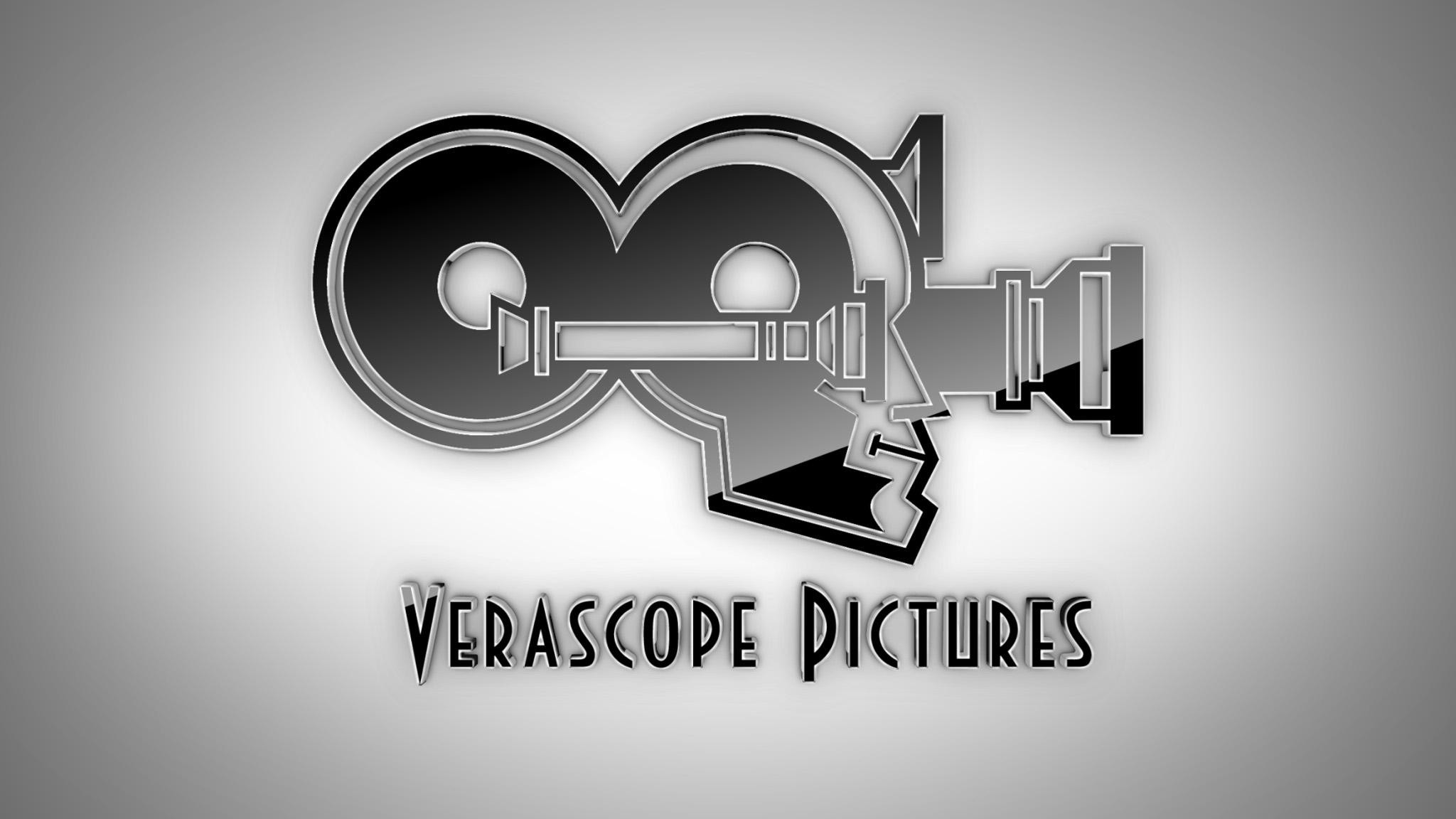 Using some of these is incredibly simple. For example, the Black Classic 3D logo simply requires that you replace the temp file in the template with the EPS file of your company logo. Everything else is done for you and you just have to choose the render comp that you want to use. This was one of the first templates I ever bought and I still use this on the Digital Signage that customers see when they come in to my office.

I also used one as a video I used for self-promotion for a content creation company I co-founded last year. We wanted to have a light-hearted personal glimpse into the lives of the four founding members, so we bought the Timeline Underscore template. I originally tried to customize it myself, but my meager skills were not up to the challenge. An AE guru charged me $200 to customize the template that I bought for $12. I think you’ll agree that the final project would have cost more than that if it was done from scratch.

Other templates have been beyond my ability to use myself, but I simply sent them along to my favorite AE artist and they were able to customize them for me for a fraction of the price of having created the project from scratch. It also allowed me to know what it would look like before the project was really even started, meaning that my need to direct the creative was kept to a minimum and the number of iterations of revisions was kept at a minimum as well.

Another way that I have used these templates is to search for talent for custom projects. One of my main vendors for the last two years is one of the artists who had created a template that I saw in an on-line template “store.” I contacted the artist and explained that I liked the basic look of his template, but that I needed something much more customized than the template itself would allow. He agreed to create a project with a similar look, but completely customized illustrations and presentation. That allowed both of us to start from a common point of reference and kept unproductive detours to a minimum. 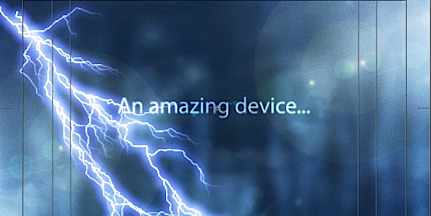 Two of my most high profile uses of these templates were the use of the Blueprint template as a show opener for a mass market DVD I produced that was used to promote the film “Courageous.” The other was using a template from Videohive called “Cinematic Stormy Trailer” (which is no longer available) to create the text screens for the movie trailer for the film, “Unlimited.” The movie has a visual theme of electricity and the template was really about lightning storms. By stripping out various layers of rain and blowing snow, I was able to create a graphic look that transformed a “storm” into a dramatic, but “non-stormy” background for text. Instead of using the template at it’s full length of about 90 seconds, I broke it into 2-3 second pieces that made my text look much more polished and dramatic than simple white text on a black background. It also allowed me to do a Spanish language version of the trailer without having to turn to a graphics artist.

Videohive has a different licensing concept than MotionVFX. MotionVFX’s templates are slightly more expensive, but there’s only a single price that is independent of the use of the material. Videohive has two tiers of licensing. One is for personal use on a website or in a video that is not designed to make money, and then there is an advanced licensing option that covers virtually any use of the material beyond the personal use. I have purchased both types of licenses. And the company has allowed me to convert licenses between the two types, though you have to contact them to do it instead of being able to have some simple internet store method.

There are also literally dozens of other places to access these templates. Many stock footage houses have started to include after effects templates in their offerings. One of these is videoblocks.com. The other obvious source for these templates is Adobe itself. They have an exchange that provides some templates for free and allows you to buy and sell templates.

Another benefit of templates is that each time you use one, you get better and better at After Effects. It allows you to deconstruct effects that you like. Sometimes it’s a unique use of a filter, or sometimes when you like the movement of a layer, you discover that instead of using keyframes, it uses a script or an expression. Sometimes it’s getting an idea for the way compositions are used inside of one another or the ways layers interact. Because these are generally created by some pretty advanced After Effects users, they have a lot of secrets to reveal. And unlike a magician who won’t show you the same trick twice, you can study the tricks these gurus use over and over.