For truly integrated cross-channel or merged media story driven products, the best process is where they all run in parallel.

Alongside my day job for the past couple of years and various labs and seminars I have been involved in, one thing that keeps coming up is 'why is the process for making multiplatform so complicated / varied / mysterious / technical'. For many from traditional production processes such as film or TV it can seem like a black art. Not only are there the technical and story hurdles for each platform, whether smartphone, tablet, web or games devices but there are the complexities of delivering to all of them at the same time or in a staggered release schedule. Then comes the further black art area of the back-end server and content management issues.

So in the presentation embedded below the main image, I tried to at least raise some of the key issues about process and considerations. This was part of a public talk in a 3 day lab I ran last week with SAFC for its Digital 360 lab initiative, where I had 15 minutes to set the stage for other speakers talking about various production issues. I didn't go into some of the key problems that I come across daily in a media organisation, where legacy commissioning structures, budget release and content silo's cause even more process problems – the ever so present issue of 'multiplatform' as an after-thought or very worse case 'a marketing campaign' to draw users back to the tent pole tv or film property. That I will leave for another day/post.

One thing I and other enlightened multiplatform producers often talk about is the parallel production process. By that I mean that for truly integrated cross-channel or merged media story driven products, the best process is where they all run in parallel. They still keep to their own rigid production sequence but wherever possible, they run together. So concepts and stories across Film, Multiplatform and Games are mapped out at the same time. The overall planning and pre-production are hand-in-hand and so on. I tried to find a map/chart of how this could work on the web but drew a blank, so I tried to fill that blank in for my talk. But even this only went so far. So the 1st diagram below is an initial stab at what an ideal production process might look like. Each of the components within the 6 stages across the 3 key media types, synchronised. 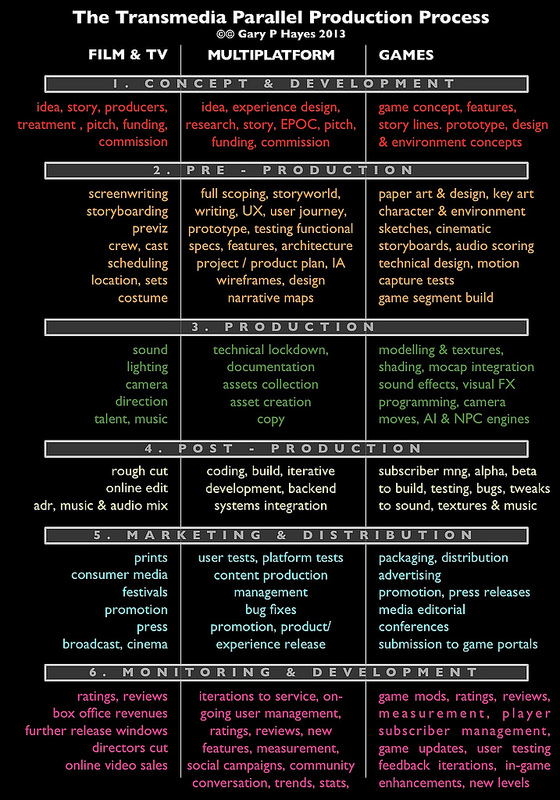 OK, yes there are quite a few anomalies here (such as leaving off budget/commissioning games which can be as high a big feature films!). Some elements of each of the three columns do not stack up totally time wise and as we know the flow of production cannot be stopped while it waits for other ducks somewhere else to line up but, by moving a few components up and down the cycle a big media production across all three could easily be scheduled to work – with teams allocated across the flow. It goes way beyond getting a few photos during a film shoot for the web or some motion capture from the TV show for the game, this is about real joined up thinking and process.

An obvious and oft forgotten thing (for linear producers) that popped out of this exercise was the issue of completion. Multiplatform and games unlike TV/Film are never really finished. Being software and being used by people we can monitor it throws up an after launch continuation of development. Film and TV are generally packaged up or broadcast from tape/hard drives but they are rarely re-edited based on feedback from those who viewed the blu-ray! So stage 6 in this diagram shows games and multiplatform mostly on their own, particularly networked web/mobile services or MMOGs, where extension packs, or new features are so important to keep them fresh and engaging. Then there is the social which is intrinsic in multiplatform areas (web/mobile/social media) and actually part of the mechanic of most modern games – but left off the scope of film/TV as a marketing element vs an integrated part of the storytelling. This is changing of course with social TV and more ambitious films.

The advantages of this are immense. Shared promotion, shared asset production, shared story building and so on. I would be interested if any readers know of companies that have cracked this and have good case studies (I didn't have time to find some great examples – particularly film/game). TV is improving all the time with parallel show and multiplatform plus the new kid on the block 2nd screen (which totally needs parallel production methodologies). No doubt these new forms, in time will become as mature as linear Film which has been locked down as a mature process for 60+ years. So much so that film production process is taught in film schools around the world and Hollywood down to two people and their dog film operations have a robust production template to work too.

So onto the 15 minute overview presentation which covers some of the persisting issues with parallel media production embedded from slideshare.

Again share any thoughts you have come across yourself with this basic issue that still faces all multiplatform / transmedia producers globally – how best to make this multi platform content pipeline really sing?