Pirates, Kickstarter and writing for your community in this one-on-one with author and transmedia producer, Andrea Phillips 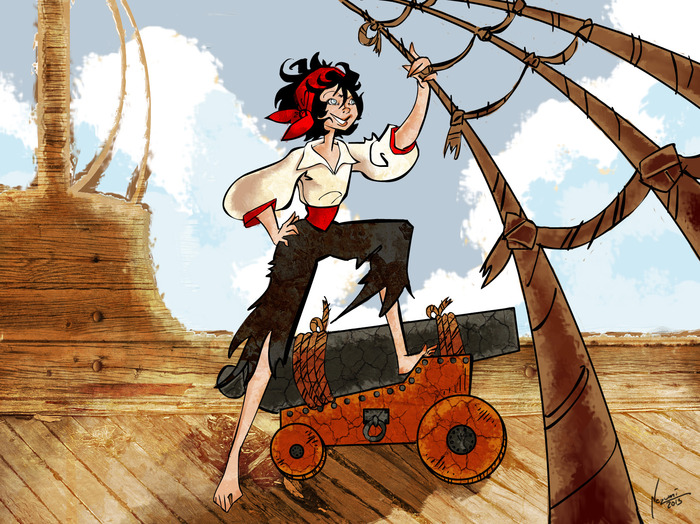 I recently had a Skype with Andrea Phillips, author of A Creator's Guide to Transmedia Storytelling, about her latest Kickstarter project, The Daring Adventures of Captain Lucy Smokeheart. I’ve known Andrea for a few years now, meeting at various transmedia events, meetups and occasional evenings at the bar, and wanted to get her personal take on creating a project from scratch. I was also curious about her influences and decision to use Kickstarter.

The first question I asked Andrea was to have her explain Lucy; she paused for a moment and decided it was best to start with her inspiration for the series first:  “Let me sort of back up a bit and tell you why I’m doing anything at all. Last year at SXSW I was talking to Adrian Hon, and giving him my age old gripe of, I do this really amazing marketing work, but I’m terrified of the day marketing people stop calling me and I don’t have any income anymore. So I’d really like to build some sort of a direct connection with an audience so that I have something to rely on under my own steam.” She paused for a moment before continuing, “and, well, Adrian looked at me and said ‘what are you going to do about that’ and then he walked away to get his coffee.” In a panic, Andrea says she needed to think of something to tell him by the time he got back, which led her to commit to making another project, Felicity. Over the course of the year she made slow progress on working towards her promised goal of building a connected audience, but now with Felicity firmly in the hands of her agent, she decided it was time to focus on a new project and to fulfill that promise.

Funding one’s work is the biggest hurdle creators find, and Andrea says she doesn’t want to use people for free, so that has never been an option in the past. But then shes smiles and tells me that with the advent of social media and crowdfunding, “naturally the mind turns to Kickstarter.” One of her previous projects, Shiva’s Mother, had such success as a Kickstarter funded project, that she decided it was time to try again, this time with a unified theme. She says she sat down to write a list of all of the awesome themes she could think of and pirates came to mind.

The Daring Adventures of Lucy Smokeheart, Andrea explains, is a monthly serial and treasure hunt that will last the course of one year. Each story will end with a puzzle for the reader to solve which will lead to a new online piece of information about the treasure and where it will ultimately be located. The treasure itself will be virtual, as Andrea feared creating a ‘real life’ treasure would be unfair, “because it becomes geographically locked, and competitive… that wasn’t the feeling I wanted to foster with my audience.” She continued by expressing a desire to create a virtual, engaged community: “I’d like to foster a group of readers who all love each other and want to help each other and weren’t fighting to get a handful of gold doubloons.” Andrea describes the heroine, Lucy as “a rompy, Xena style” character.” She is a fun and funny feminist who is just as comfortable at playing a female (think big hair and big skirts) as she is capable of “cutting a deal with carnivorous mermaids.” (carnivorous mermaids?) Andrea laughs as she explains that writing Lucy will allow to her to experiment with “throwing together as many things that I can think of which can be described as awesome, volcanoes are awesome, so there will have to be volcanoes.”

Turning the discussion back to funding, I asked Andrea what she would consider a successful project, is it monetary or something more? Andrea explains that other projects, like Zombies Run, compared to studio-funded large-scale projects like Avatar, are much cheaper and easier to make. She further explains, “big companies only have the resources to make so many films a year, and so they focus on their biggest chance to make enormous piles of money.” What Kickstarter does is make scale of success possible. You can actually make a living, and comfortably so, by being a creative. “You’re not going to be stupid rich, but it allows creatives a way to fund their works.”

Having never used crowdfunding before (I know, right?), I asked her to describe her experiences with Kickstarter. She explained that when you start a Kickstarter campaign you know that your friends will probably finance you no matter what, but the trick is to find something that is sufficiently awesome in the sense that the internet knows it, and that people who don’t know you might be willing to go out on a limb and fund you anyway. It is also the best way to gauge interest in your project: “Kickstarter is the bellwether to determine whether people actually want your product.”

As cross-platform developers, I asked if she had additional platforms in mind to expand the story world of Lucy outside of the monthly serial and treasure hunt. She tells me she considered a twitter account to advance the story and community engagement and even registered Lucy Smokeheart, but eventually decided it was best not to spread herself too thin, especially not with the demands of paying client work. If it doesn’t benefit her or Lucy it’s not worth it. “I feel like a lot of transmedia projects have a problem with too many platforms. They don’t run a cost benefit and many feel like ‘Frankenstein,’ stitched-together projects.”

Andrea does plan on using a Tumblr account, but it will mainly be a curatorial device for user generated content or for those who want to share fan art. The goal of this is to have a living document that can be archived and accessed anywhere anytime.

Another way Andrea plans to expand the narrative, and one which was included in the Kickstarter campaign backer rewards, are Google hangouts with Andrea. The hangouts are multi-purpose, not only do they allow audience members to connect directly with Andrea, but Andrea in turn will use these sessions as a way to talk over the storyline with her community, and see what they want or feel is missing from the narrative. This makes the story more audience-driven, providing for a richer experience. Google hangouts will become her own private workshop.

Finally we talked about the big thing on every creators mind, how will the project make money? Andrea explained that if a large following comes along with a high demand then the episodes will be monetized, and artifacts will go up for sale i.e., the treasure map, t-shirts and posters of the artwork. But if this is going to be a project for only 150 Kickstarter people, then it’s not worth it. “I don’t want to ask too much of my fans, I’m not trying to upsell them.”

Upon ending our chat I asked Andrea if she had any last words on using Kickstarter, she laughed and said, ”oh my god, I funded, I have to actually write this now!”

The Daring Adventures Of Lucy Smokeheart was launched on Kickstarter on February 26th, 2013 and ended March 28th, 2013. A total of $7,701 was pledged which exceeded the initial goal of $5,000. To date seven updates have been sent to the 251 backers and the first episode is now available for purchase, be sure to check it out: http://lucysmokeheart.com/episodes/