The American Society of Cinematographers (ASC) host an open house every year the Saturday before their star studded awards.  It takes place at the Iconic club house in the heart of Hollywood blocks from the Grauman's Chinese Theater.  The “club house” is a true symbol of Hollywood and the craft of cinematography.  The society's symbol has three words that are honored – Loyalty, Progress and Artistry.

We were invited to stop by yesterday to rub shoulders with this amazing group of cinematographers and the community that supports them. Some amazing gear and technology was also showcased at the event and a few fans stopped by to pay homage as well.  There were hundreds gathered here and most of the nominees were also present.  We spotted Claudio Miranda, Life of Pi (Academy Award Nominee for Best Cinematography) mingling and also took the time to snap a few pictures: 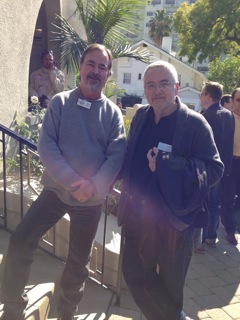 Pictured to the right here are Bob Primes, ASC & Dave Stump, ASC.  Dave sits on the esteemed ASC Technology Committee and is also writing a book which should be realized in 2013.  He mentioned only one more chapter to complete.  Go Dave! 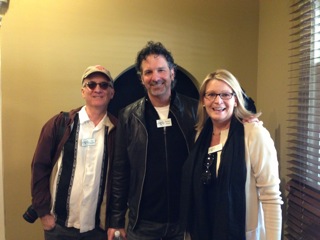 We ran into one two of my favorites at the Club House, both of whom have spoken at one of our Createaphere Events. Romeo Tirone, ASC & Tom Houghton, ASC were circled by their fans but let me jump in for a quick photo.

Tom Houghton, ASC with credits as Director of Photography on Rescue Me (FX Network), Persons of Interest  (CBS), & 30 Rock (NBC), but the list goes on. Tom joined us in NYC to discuss his work on Rescue Me and you can check out that video here… http://vimeo.com/15966344. Romeo Tirone, ASC with credits that include Director & Cinematographer on Dexter & True Blood. You can check out the rest here. 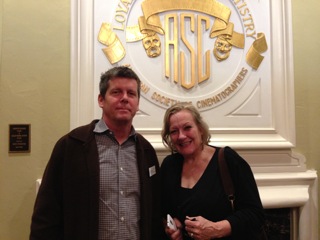 Peter Deming, ASC,  pictured here with Christine Purse of Ignite Media, was also present. He is ready for the March 8th, 2013 release of his next picture, the highly anticipated “Oz The Great and Powerful”.   We had the privilege of having Peter keynote at the ETE Expo November 2012 and got to preview the trailer. I heard lots of chatter in the club house about how startling beautiful the images are…

Thanks to the ASC for a great open house. Tonight we're off to the awards at the Ray Dolby Ballroom inside the Hollywood & Highland complex.  Click here to see who is nominated: http://www.hollywoodreporter.com/race/asc-awards-5-things-know-419709