DaVinci Resolve isn’t listed as being supported as of yet. Hopefully soon.

Word came out today from Tangent Devices that the first Element panels are now shipping. If you don’t remember the Element is Tangent’s newest color grading control panel that uses a modular design that is four separate pieces that can be purchased separately. They are designed to work together to make a more full featured panel than the Wave with trackballs and rings, knobs and buttons and transport controls if the buyer so desires. As for supported applications, Assimilate SCRATCH and Apple Color are two more common applications on the list but the one many people are asking about, DaVinci Resolve, is (so far) missing.

The conspiracy theorist might say that Blackmagic Design might not ever support the Element as the panel looks so cool the colorist might not need to purchase the full (and much more expensive) DaVinci panel but the truth is that BMD has to build the support in themselves so it will take an update to Resolve to get any new hardware support. As cool as the Element looks the big Resolve panel is tailor made for the speed and efficiency when using the software and the Element has been designed to support multiple applications. That means the Resolve panel will have advantages over the Element.

That said the Element looks like it will be fun to use. A check of the main Element page will show the four different pieces that make up the whole unit. This little YouTube video is a 7-second piece that gives a little bit of an idea of what the Element is like. This is a pre-production unit I’m sure so the final version might vary.

I like the idea that you’ll be able to buy just the trackball unit as I bet that will be a popular purchase if / when they do support Resolve. Those trackballs and a keyboard will mean a nice little workstation. What are the Element prices? Word to me from Tangent was as follows:

Those prices may vary as it begins to ship but as an early indicator of price that looks pretty good if the construction and quality of the panels are as good as reports have been. For a bit of detail on the development of the Element check out this post from colorist and author Alexis Van Hurkman about the Element and his even better followup about the evolution of the design. Hopefully we’ll get one in the Editblog garage for testing and review as we did with the Tangent Wave (and what was then the Euphonix (now Avid) MC Color).

If we do get one I hope DaVinci Resolve will be supported as that’ll be the weapon of choice. That is unless we see Adobe shipping CS6 with SpeedGrade included. That’s the other wildcard in this whole affordable color grading tools equation. With Apple Color gone the way of the dodo bird we’re left only with Resolve until Adobe ships SpeedGrade. It’s always nice to have competition.

Check below for more details of what each piece of the Element includes. You can sign up for products updates from Tangent as well. As for purchasing an Element, Tangent has a reseller page on their website that could point you in the right direction. As of this post the Element isn’t listed on B and H Photo’s website but I would guess that’ll change as soon as the Element is shipping in larger quantities. If someone gets an early Element I hope they’ll post their thoughts in the comments below. And if someone from Blackmagic Design wants to let us know that Resolve support is coming then we’ll be happy to have that comment too. 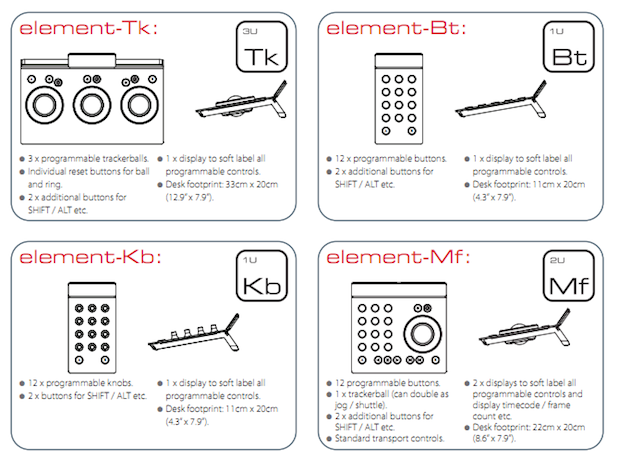