NAB 2015 made me rethink what a “Stock Element” is, and why Style Elements are quite simply the “Plug-in Preset”, without the Plug-in.

My NAB was totally crazy this year.  I was not only there in a writing capacity, but I was also there demoing for a couple companies, one of which was Rampant Design Tools.  If you’re not familiar with them, they design “Style Elements” for you to use in your Non-Linear Editors or motion graphics applications, to avoid the pain of learning a plug-in, when you’re on a deadline.

My demo for them was a bit of an interesting one.  My weeks leading up to NAB were crazy.  My family went to Cuba for my wife’s birthday two weeks before I was to head off for Vegas, so that gave me a week to prep things for both sets of demos that I’d be doing.  I sat down the Sunday I got home and started thinking about what I wanted to show off, and I started getting ideas in my head about giant balls of fire revealing text, and all kinds of other crazy things, and then I saw Monica Daniel post on the Rampant Design Tools Facebook page, about how she was going to be demoing about how she uses RDT elements to change the tone of a story. 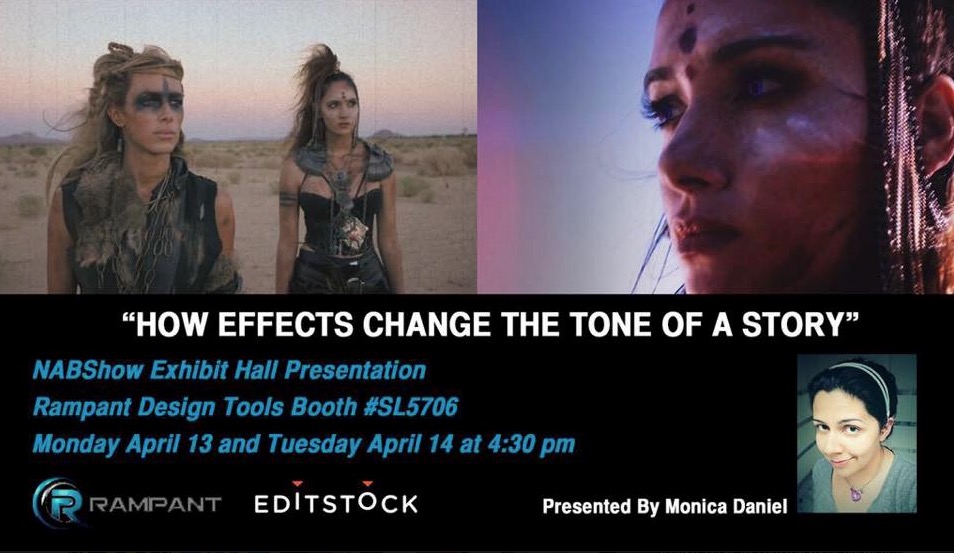 So then I started thinking “Well, I better come up with something just a cool, so I can keep my demo interesting.”, and then it occured to me.  That was the complete opposite of what I SHOULD do.  As cool as it would have been to show fire and smoke and lens flares (which I did show, by the way), I thought it was more important to talk about the misconception in regards to using Stock/Style Elements.  Most people immediately write them off as being inferior to Plug-ins, and that’s where I competely disagree.  In many cases, I find Rampant Design Tools elements to far exceed what  plug-in can do for me.  I work on many Hollywood commericals up here in Canada for the French Canadian television market, and one movie I just did a ton of spots for was Mad Max: Fury Road.  Trust me, there was a ton of fire elements in the commercials, that I need to recreate, or rebuild as close to the original as possible. When you have less than eight hours rebuild a spot in french, and make it as exact as the English counterpart, you don’t have time to mess around with plug-ins.  I need fire, and I need it now.  That’s where, for me, these elements really shine.  For my demo, I wanted to break down that barrier, and show people not only do these elements look great, but their very affordable and dirt simple to use.  I like to describe these Style Elements as Plug-in Presets, without the plug-ins.  I think I did a pretty bang up job of showing that at NAB 2015.

For more information about Rampant Design Tools, you can check them out at www.rampantdesigntools.com and to keep up to speed when new Media Composer tutorials are released follow Kevin on Twitter @kpmcauliffe, send him an e-mail at [email protected], or subscribe to the YouTube Channel to stay up to date on new tutorials each week.