As mentioned earlier, we will be discussing motion graphics projects executed by other studios. This time around, it’s Buster Design and the on-air promos they created for Fringe, a new series premiering this September on FOX – click here to view movies of the final animations. I had the chance to chat with Brandon Pleus of Buster about what went into this project.

FOX had already created a print ad series promoting Fringe which featured graphical symbols and other signs of intelligent life embedded into natural objects, such as into the core of an apple or on the back of a leaf or a frog. FOX handed PDFs of these over to Buster with the simple orders of bringing them to life. You may think that this led to a relatively straightforward job of taking the layered print elements and animating them around the screen, but in fact Buster tweaked or re-created many of the elements to make sure they “read” well on TV – where you saw them for a fleeting moment – compared to print, where you had a chance to stare at a high-resolution image. One example is in the apple images below: The one on the left is from the print campaign (click image to view a slightly larger example); the one on the right is from Buster’s animation (click image to view a QuickTime movie). Note the differing contrast for the embryo compared to the surrounding apple: 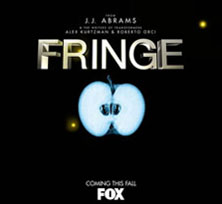 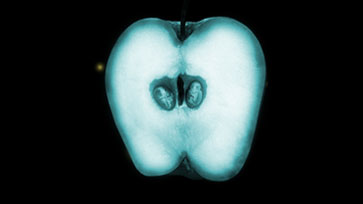 The image on the left is from the print campaign for Fringe; the image on the right is a still from Buster’s animation. Click either to see in more detail.

Another difference between the print and broadcast campaigns was the ability to create a “reveal” in video. The goal was to have you first read a normal object, and then animate it in some way to give you an unsettling “aha” moment just before swiping it away to transition the show’s name. Repeated viewings uncover more details.

For example, take the frog spot shown at right (it may take a bit to load). Initially, the frog appears to be a still image. The “twitch” movement of the head and eyes are so fast you might not be sure you saw it, but they serve to draw you in, eventually moving your gaze down to the icon on the frog’s back. It may take a couple of viewings to realize the frog is breathing. Just as you start to mentally confirm the subtle motion, the frog jumps out of frame. (You will see similar steps in the apple/embryo animation above, from the falling away of the front half of the apple to the subtle movement of the embryos themselves.)

That wasn’t a real frog, of course; it was created with a combination of Maxon Cinema 4D and Autodesk 3D Studio Max. Most of the promos used Max, while the “smoke” promo used Autodesk Maya. All were composited in-house using Adobe After Effects.

Being an audio guy, I was particularly drawn to the sound design in these promos – a combination of ominous rumbles, organic elements, and the metallic reveal at the end. (Play the frog movie above with the sound on, or click here to go to Buster’s page with four movies of the promos.) Buster did the sound design in house. Rather than just deliver a video file or dub a silent movie to tape, they prefer on all their jobs to create scratch tracks of what they feel the accompanying sound should be like, as a guide track for the client. In this case, FOX liked their scratch tracks so much that they used it with just some remixing.

(If you’re into sound, also give a listen to FOX’s radio ads for Fringe, as well as the Fringe web site. And while we’re talking about the promo site, those graphical elements along the bottom are Braille. If you have a recent version of After Effects, Adobe Exchange includes a bonus library of Shape Layer presets that includes the entire Braille alphabet. But I digress…)

The final element I’ll draw your attention to is the ending animation for each of the spots. There are some very nice organic wipes going on, as well as subtle textures in the background. Again, these were elements FOX was already developing in-house, which Buster was able to put to use in the broadcast promos.

The ending of the Fringe spots include some nice organic wipes. You can see this in motion at the end of the “frog” spot above.

If you’ve worked on an interesting project that you’d like to share, email cmeyer at the above domain (provideocoalition.com). Please include both left and right brain details about the creation of the project, along with some images or movies for readers to see. Remember, sharing is how the community moves forward…