A subtle interface change and quite a few new features

NAB 2013 has seen another update to the do-all encoding application Sorenson Squeeze. This release takes the app to version 9. Some of the signature new features include an enhanced interface, pre-roll and post-roll, optimized encoding for HTML5 and closed captioning support. It’s also worth noting that the Squeeze interface gets a bit of a refresh as well. Don’t expect a Final Cut Pro X level of radical redesign but rather a refresh that feels newer but keeps overall use of the application the same. Here’s a few of the features I noted as I was working with a beta version of Squeeze 9. 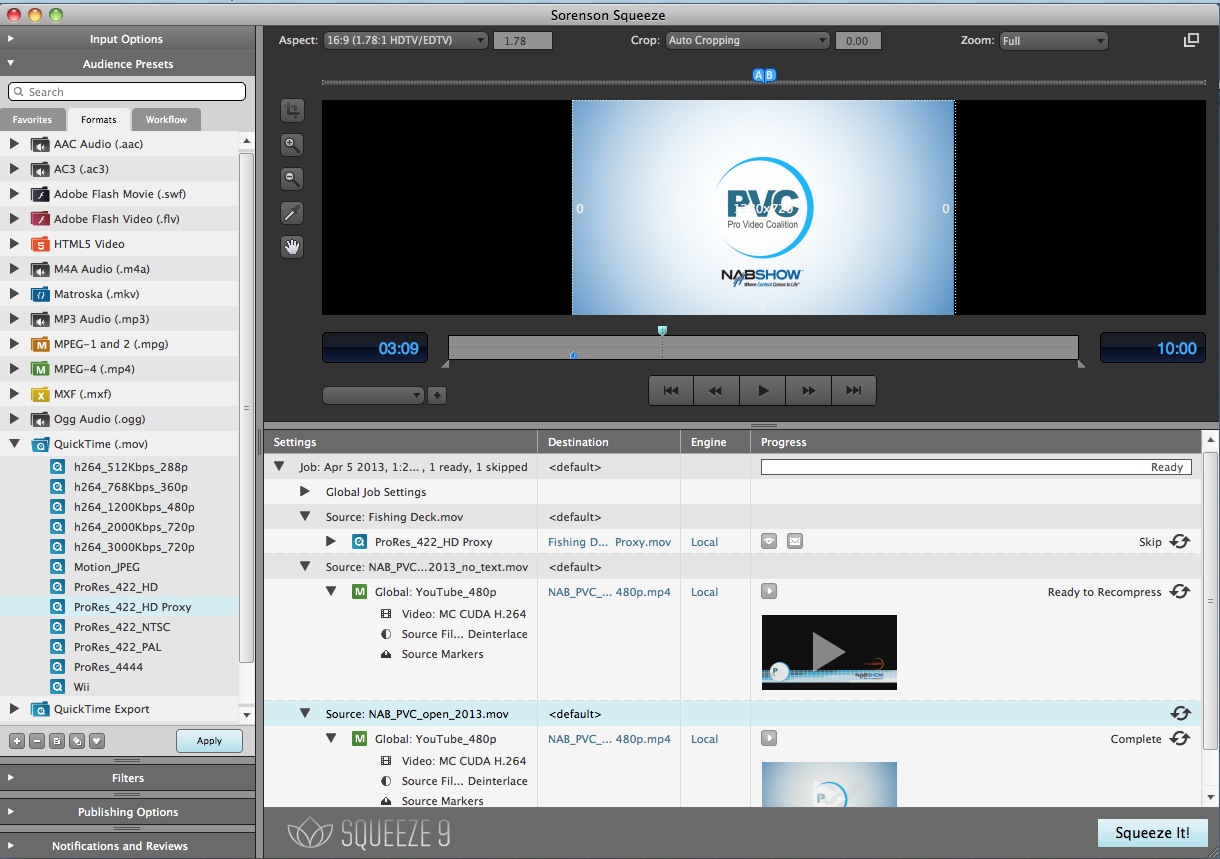 I’ve been a Squeeze user for about as long as I can remember being an editor. It probably stems from versions of Squeeze being part of the Avid Media Composer package for as long as I’ve been using it. I remember often choosing the Sorenson codec back long before H.264 as you could dial in some great quality at very acceptable file sizes. There’s a lot of competition for Squeeze these days, ranging from more expensive to free. But Squeeze keeps chugging along.

Since you can’t have a release like this during the week of NAB without highlighting all the new features, here’s the bullet point list of what you can expect:

· Improved publishing workflow—enabling the ability to preview content before publishing, and changing settings after encoding and republishing

· A video preview window organized for the most simplified, intuitive task areas for viewing and editing source content

· An updated plug-in for Adobe Premiere CS6, which provides seamless encoding from within the latest version of Premiere (and add-ons to plug-ins Squeeze already supports for every major professional non-linear editing application, including those offered by Avid, Apple and Sony).

While I look at any update to Squeeze for how it can benefit post-production I have to say the HTML 5 encoding seems like it could be very handy for those working with any kind of web video hosting. 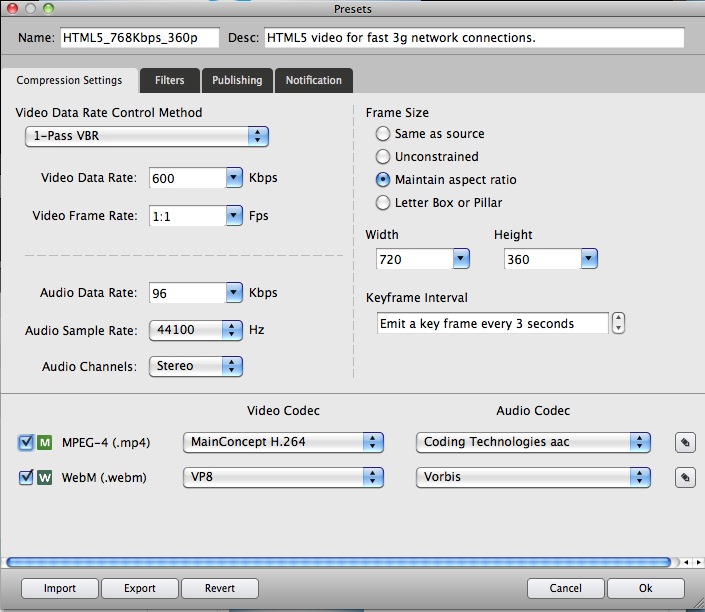 Web folks will be interested in the new HTML5 options.

When launching Squeeze 9 you’ll be greeted with some tutorials to help you get started. If you’re new to Squeeze it’s worth checking some of the services offered like the Sorenson 360 service, review and approval options as well as the very handy Preset Exchange. 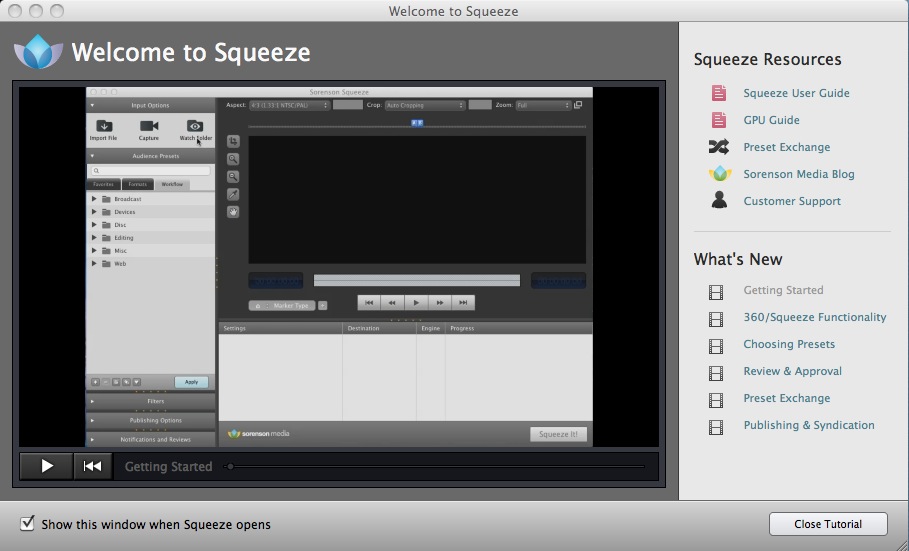 Don’t worry, you can turn this tutorial pop-up off so it doesn’t greet you every time you launch Squeeze.

But What's in it for Post-production?

Here’s a few things that might be of interest to editors. We do, after all, have to encode a lot of video.

Squeeze has always supported a ton of different formats when it comes to encoding. Squeeze 9 is no different.

Clients still often need Windows Media .wmvs to send to their corporate contacts and Squeeze is always there to handle those wmv encodes.

Add pre-rolls and post-rolls to encodes

This option will come in hand to tack another clip onto the beginning of a file you’re sending to encode. You could make good use of this feature by not having to toss pre and post-rolls into the edit timeline. 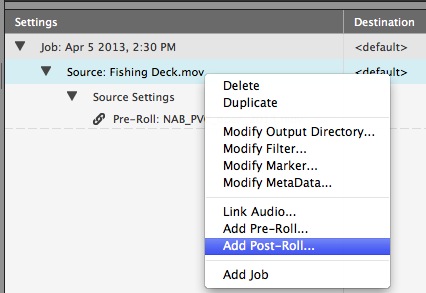 Just don’t use the new Squeeze 9 pre-roll feature for evil … like tacking too many pre-rolls onto your YouTube video.

Compression status in the main window

While Squeeze has always given a progress bar to let you know how a compression is going Squeeze 9 adds some text to let you know an even more exact status of clips sitting in the window. 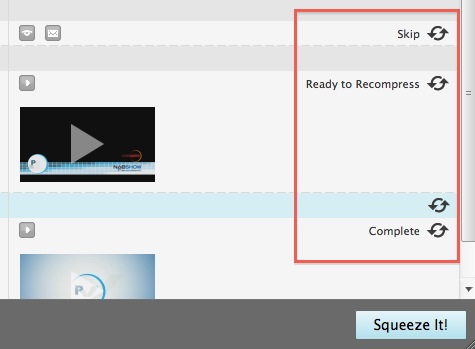 Get an idea of the exact status of a clip with just a glance.

While Squeeze has always had a filter for burning timecode data into a clip, choosing Source Timecode: Use Source never really did the expected behavior … that is the behavior of burning source timecode from a Quicktime into the clip. I was never able to figure out what source it meant.

With Squeeze 9 Use Source in the timecode filter will actually burn in the source timecode of your Quicktime clip provided your .mov has source code. 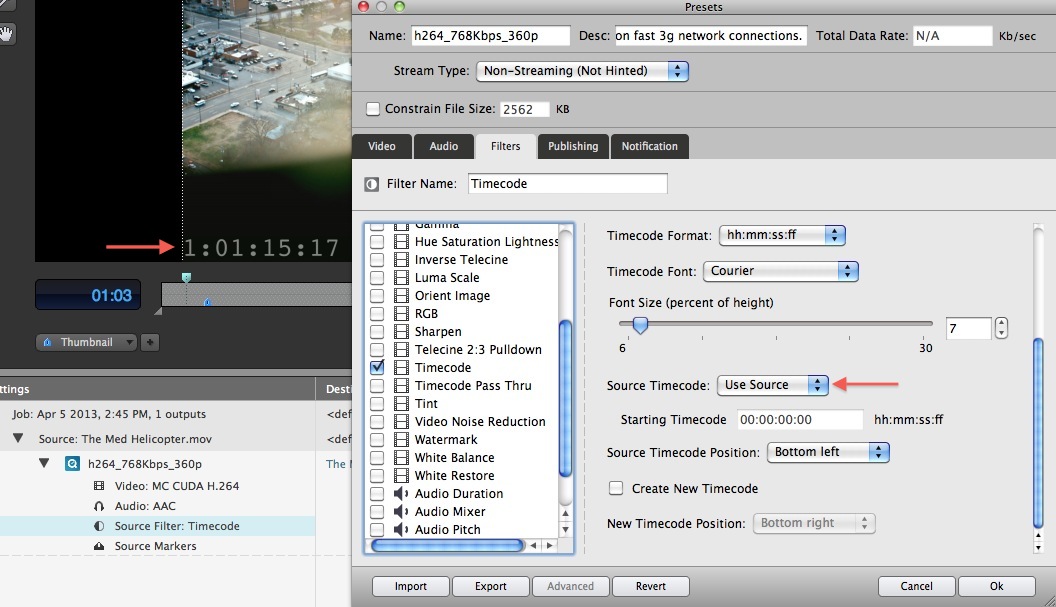 With Squeeze 9 we can now use it as a true BITC creation tool.

A couple of versions ago Sorenson Squeeze added the ability to encode to Avid Media Composer compliant OP-Atom DNxHD. But if you were familiar with Avid’s DNxHD settings there always seemed to be something missing when setting that encode up. 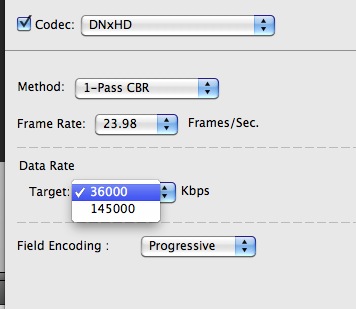 While DNxHD encoding worked before, the version 9 update adds all the formats an Avid editor might expect when encoding clips to DNxHD. 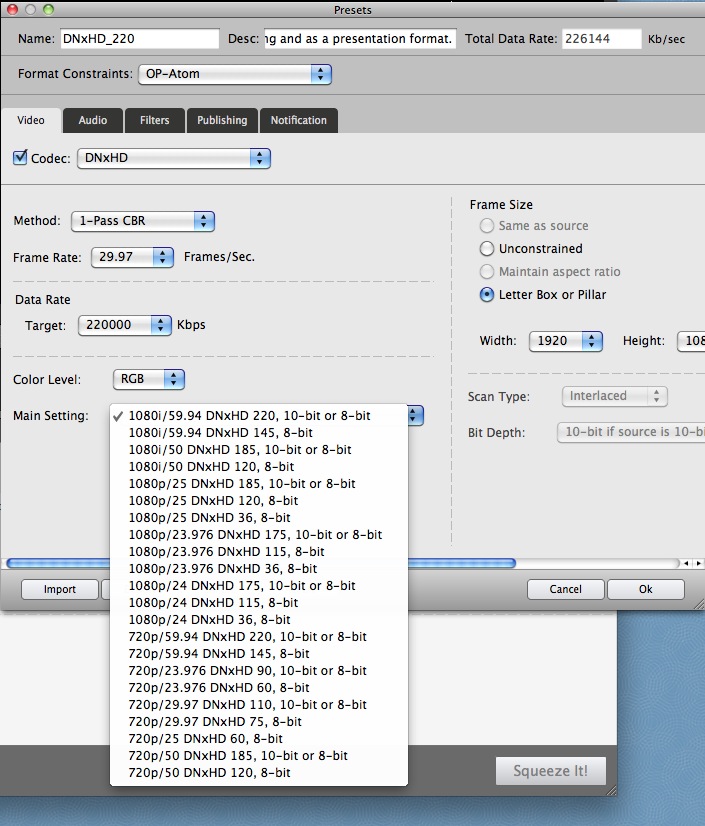 One thing that hasn’t been added to Squeeze 9 are workflow presets for all the different flavors of both DNxHD and ProRes. So you may have to create your own.

The two arrows above show two workflow presets that I created as I use those low resolution encodes a lot. Just duplicate an existing ProRes or DNxHD preset, change the name and format to any of the other flavors.

I bet you can dig around the Sorenson Preset Exchange and find most any of the DNxHD ProRes flavors.

Overall it’s a solid update with some new features that editors can take advantage above. One of my favorites is still the CUDA GPU acceleration that can tear through H.264 encodes.

Sorenson Squeeze 9 will be available at a price of $799 in the Standard edition form and $999 for Squeeze Pro (Pro is the version you need btw for ProRes and DNxHD encoding).