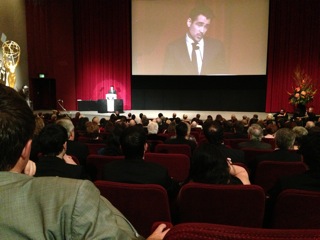 Colin Farrell announcing winners
Saturday night was the night for Camera Operators!  The Society of Camera Operators celebrated the “best of the best” at the Leonard Goldenson Theater of the Academy of Television Arts and Sciences in North Hollywood  honoring cameramen in television and feature film, in addition to the SOC honoring industry leaders in the following categories:
2013 Technical Achievement Awards:
Distinguished Service Award:

2013 Camera Operator of the Year awards:

Even though the audience was packed with over 350 in attendance from across the world the Awards had a community feel and personal touch.  It felt as if as we, the audience, were allowed to venture on the set of a production to witness the working of the camera operators and get into their hearts and minds. The Awards are put on not only to acknowledge the camera operators but also as a fundraiser for The Vision Center at Children's Hospital Los Angeles which as been an SOC charity of the past 30 years.
The evening started with a red carpet walk and plenty of mixing amongst the nominees over an open bar with plenty of food. Afterward the robust awards presentation took place in the beautiful academy theater which kept the entire audience entertained and delighted throughout the ceremony. The evening ended with a lively celebration with the winners and more open bar…
The entire event was filled with heart felt acceptance speeches which all had the same tone of appreciate for the art and craft of the industry and a respect for their fellow crew members.  You could also feel a huge sense of appreciation to the families of those being honored and awarded for understanding the crazy hours and long stretches of time away that are necessary parts of the job.  Many happy tears were shed and fantastic stories were told.
One that that stood out to me was Seamus McGarvey BSC ASC honoring his camera operator Peter Robertson ACO SOC. Seamus's devilish sense of humor and deep appreciation for their partnership in making Atonement and most recently Anna Karenina was apparent in every word of his speech. He told a fantastically funny story of their train ride home from the far reaches of Russia after wrapping Anna Karenina that involved vast amounts of vodka which demonstrated the respect and trust that is built between the operators and DP. 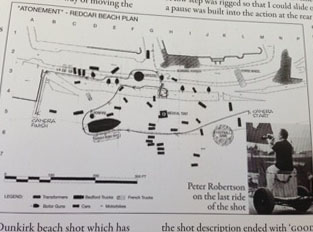 Stories of the relationships built on set and in production run deep and you can see them translated into the amazingly beautiful images on screen.  We got to hear from Peter about both the pressure and excitement he felt in taking on an epic shot in Atonement where he rode three different types of vehicles on the beach. He needed to get on and off the vehicle several times but finally got it on the third take with 1300 + extras. Initially director Joe Wright and Seamus thought this should be done by three camera operators but their trust in Peter ultimately won out. To the right is the beach plan published in the awards guide.  We also had the pleasure of watching this epic shot with Peter's narrative.  Go see atonement again just to take in this masterful shot!
A congratulation to all the nominees and winner.  Truly an amazing group of committed artists! 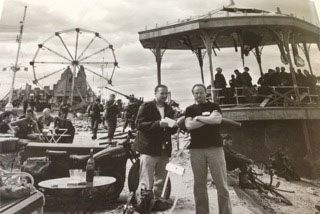