I’ve seen a lot of expensive development going into ground based POV cam rovers, cars, and trucks lately, so I decided to venture into what it takes to build a functional DIY rover that can be used in various locations and production purposes.

I’ve seen a lot of expensive development going into ground based POV cam rovers, cars, and trucks lately, so I decided to venture into what it takes to build a functional DIY rover that can be used in various locations and production purposes..

Ground based systems that may look like simple RC toys (which at their heart, really are) have a function that neither aerial nor handheld operation can achieve. Getting into locations inaccessible or possibly dangerous by other means, is probably the number one reason to build a system like this. Agriculture, wildlife, conservation, geological studies and many other industries have need for an economical entry into this technology.

The purpose of my particular concept was to find a lightweight and very flexible rover platform that could be used in various types of video production that I might encounter with corporate and governmental agencies as my clients. Getting good POV footage is always a challenge and seeing the world from different and compelling angles always keeps your production interesting. It’s also good to explore various ways to get you cameras into locations that might offer closer details or discovery after the fact from a mission.

So this is only Part 1 of what I hope to be a multi-part exploration of this conceptual endeavor. With the help from the folks at Multicopter Warehouse that provided all the camera gear and support, I also hoped to expand on this basic concept with more automation in the near future from the help of my engineer friends who used to work at 3D Robotics to build an ultimate Ardu Rover with autonomous control and more advanced electronics and automation.

Step 1: Selecting the right rover base

I did a lot of reading up on various RC crawlers, and while I’m no expert in this form of hobby in any means, I wanted something that was RTR (Ready to Run) and very reasonable on the pocketbook for folks to get into. I was looking more for stability and articulation of the suspension/frame to allow the smoothest passage of the rover over obstacles and through uneven terrain to help the onboard POV cams and gimbals provide a steady video and less risk of a tip-over.

I’ve seen lots of smaller 1:10/1:8 scale RC cars and trucks with GoPros mounted to them out in some of the RC forums but most of them were made to record their speed/action and not to deliver smooth video. I wanted something that would be able to literally crawl and not lose footing or tip over with the added weight of cameras/gimbals attached. I also wanted enough speed when needed to provide a smooth carriage ride for low-profile dolly shots on pavement or concrete floors such as warehouses and office buildings. 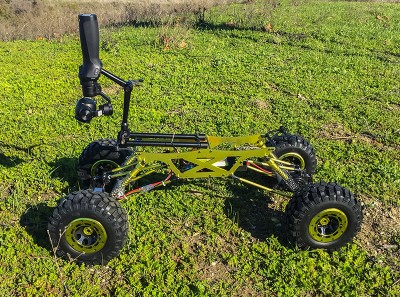 I discovered some 4×4, 6×6 and 8×8 crawlers that were promising, but trying to figure out how to attach cameras to the smaller frames seemed problematic. After seeing the demo videos of the Exceed MaxStone 5 Crawler from NitroRCX, I knew that this would be a great start for my concept rover.

Not only is this RC frame one of the longest in this class at 33″, but also has waterproof electronics that will be less sensitive to the elements you may venture into. The articulation of the suspension/chassis is incredible, even under load. With the foam-filled rubber tires mounted on true-beadlocked aluminum rims and an all-aluminum frame, this should provide a good solid base for a lot of experimentation for our concepts. It also features an adjustable suspension that will allow for control of the wheelbase and stiffness of the ride.

After many different experiments in camera & gimbal mounting techniques, I’m currently settled on one particular design that works with the DJI OSMO Handheld Stabilized Camera (or even the GoPro Karma Grip) that allows a secure attachment and flexibility for various shooting scenarios. I tried a low-profile cine cheeseplate mount attached securely to the front of the frame which allowed the OSMO to shoot forward and stabilize in a low angle. However from my tests, I noticed that this introduced more unnecessary vibration in the footage and didn’t allow rotation of the camera head as it does when the handle is mounted vertically or inverted. Of course, the GoPros are easily attached to the frame with the sticky-mounts and various angles or flex-mounts; especially for the Session, which is easy to place in just about any position. 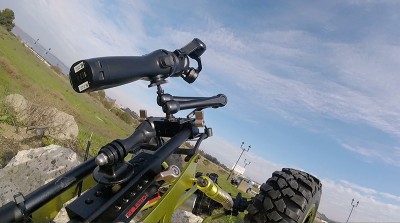 So I’ve decided for now that I’m going to use parts of my cine production kit from Genustech which includes two rails with a clamping mount base and a Cine Arm to attach the OSMO to the rover frame. This allows more mount points and reduces flex and twist from the gimbal mount and can be positioned either low-profile or twist the mount to any configuration to capture stabilized and smooth video.

We also tried some smoother surfaces such as pavement (which still introduces some slight vibration in 4K footage as you’ll see in our demo video) which could be due to the off-road tires and stiffness of the suspension. Indoors, we tried smooth concrete, carpet and other crazy tests as you’ll see in test video as well. 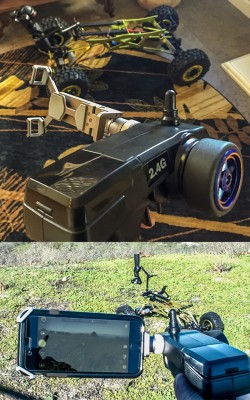 Actually, the OSMO proved to be quite stable in the warehouse, while the GoPros showed quite a bit of vibration from the tires/frame.

Lastly, I’m not used to using the radio controllers that come with these RC cars and don’t plan on keeping this system hooked up for long anyway, especially once we incorporate the Ardu Rover into it, but for now I needed a way to attach the OSMO smartphone mount where I could see it and access it easily for operating the camera and gimbal features.

I opened up the stock controller just enough to check for clearance on the left side/top and then simply used some 3M tape and a self-tapping screw to attach the mount to the controller. It’s a bit awkward as you have to hold the gun-style grip/trigger with your left hand and twist the wheel knob with your right and the weight of the smartphone hanging off the left is a bit unbalanced, but it does work well.

Unfortunately, since the OSMO is WiFi from your smartphone to the camera, there is a slight lag in the signal, so trusting this setup as your only FPV source is inadvisable. It does however, help you line up the shots you hope to capture and if the OSMO is positioned in a vertical or inverted stance, you can use the touch-screen to rotate the gimbal around 360º.

So here are some first attempts at various terrains, obstacles and shooting scenarios, primarily captured with the DJI OSMO with PolarPro ND filters and GoPro Hero4 Black/Session so you can see the articulation of the chassis and watch the OSMO gimbal work.

One thing is very evident with 3-axis gimbals, especially on a small bouncing rover like this: we desperately need 3 more axis for X, Y, Z stabilization!

Check out Part 2 where we look at a line of ready-made cine rovers called the Eclipse Rover, with more capabilities and stability. Beyond that, we should have some autonomous rover tests in the can as well.

Welcome to the ProVideo Coalition Podcast! With so much news coming out every day it’s nearly impossible to keep up...