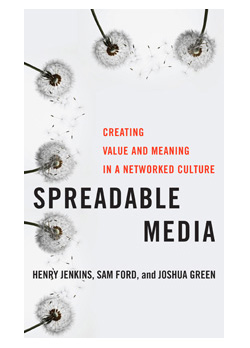 My new book, Spreadable Media: Creating Meaning and Value in a Networked Culture, co-authored with Peppercom’s Sam Ford and Undercurrent’s Joshua Green, was intended to spark conversations about our current moment of media change among a range of stakeholders, including both fans and producers of transmedia entertainment. If you want to sample the book, there are two ways you can do so — you can download the book’s introduction here or you can go here to find a range of short, blog-length responses from scholars and industry leaders who have been part of the conversation that the book emerged from. This book took shape through the activities of the Futures of Entertainment Consortium (formerly the Convergence Culture Consortium), which has hosted the East Coast Futures of Entertainment conference and the west coast Transmedia Hollywood events. But, I thought I would use this blog post to point to some other reasons why transmedia producers might want to dig around in this book.

1. We’ve Found a Cure for Viral Media! When media producers want to describe a phenomenon, such as the Susan Boyle video, Kony 2012, Gangem Style, or the Harlem Shake, which has spread rapidly across the culture, often through informal channels, there is a tendency to describe this content as “going viral.” This terminology tends to devalue the active choices which went into circulating this content. Most of us receive a steady stream of content in our inbox everyday, yet we only pass a small percentage of that content along to others, and as we do so, we are making conscious choices about which content to send, who to send it to, through which media channels, with which messages, within which ongoing conversations. We often do not blindly reproduce the content but rather we remake the content, as is common in many recent “memes” (such as the varied and creative response to Mitt Romney’s “Binders of Women” comment or the many different versions of the marriage equality symbol people posted through their social media.) The viral model plays into the hands of people who have once exerted powerful control of the cultural agenda, allowing them to believe that they only have to design the perfect virus and we will passively pass it along throughout our network. It allows some to shrug and see audience response as unpredictible and unknowable (“I don’t know what happened; It just went viral”) and others to promise they can deliver virality if the brand simply pays them enough for their occult knowledge. We are arguing, however, that the public passes along media for their own reasons, which we can better understand if we put circulation into a cultural context: often, we exchange media as a kind of cultural currency, because it says something we want to say, because it offers a gift we think will be valued by others in our network. This can be important for transmedia producers to understand because transmedia promotion often depends on the production of small bits of media that we hope fans will discover and share with their networks. For this strategy to work, you need to know more than you do know about what makes media spreadable.

2. If It Doesn’t Spread, It’s Dead! The book opens with a distinction between distribution and circulation. Distribution refers to business as usual — corporate-controlled spreading of content, which follows a series of commercial calculations. Circulation is the emerging hybrid model where some of the decisions that impact the spread of media are made by corporations according to their logics and some of them are made by a range of other grassroots participants — including your most dedicated fans. As content spreads, it accrues value; it becomes more meaningful; and as a result, it gets absorbed into a range of different conversations. Some of the accounts of the Harlem Shake phenomenon, for example, assume a zero-sum game: either the phenomenon “went viral” or it was controlled by media companies. In fact, this content traveled because media companies wanted it to circulate, because brands found it useful to attach themselves to it, but also because of choices made by a range of individual agents, including nonprofit organizations, government agencies, universities, and fans who also wanted to participate in the phenomenon. When you lock down your content, you remove it from these flows, and often, the result is content that doesn’t matter to anyone in particular.

3. Follow Retro-users. MIT Professor Eric Von Hipple has helped manufacturers to better understand what he calls “lead users.” Lead users are early adopters and adapters of new products; Von Hipple says that lead users often anticipate new uses and identify failed features before they reach a broader public, and he suggests that a company that monitors and rewards these lead users may well be able to anticipate and respond more quickly to public demand. We make an argument that retro-users do the opposite kind of work: they sift through cultural materials which are about to be swept off to the junk yard and they help to identify content which still has potential value. A media producer who engages with retro-users may be able to identify and build upon material that still provokes nostalgic responses or that offers a distinctive style that may be meaningful to a new audience that never encountered it before. Our book includes an extensive case study of the ways that World Wrestling Entertainment learned from the grassroots exchange of tapes amongst hardcore fans to re-appraise the value of their older content.

4. Above all, Engage! Our chapter on audience measurement and specifically the emergence of engagement-based models of television specifically addresses the emergence of transmedia. We offer two case studies, one focused on the strategies which Kim Moses used to promote Ghost Whisperer, one focused on the ways that Campfire sought to build an initial audience around True Blood. Both help us to understand the assumptions that transmedia producers make about the best ways to engage networks of potential fans and followers. Along the way, we also have things to say about San Diego Comic-Con, Lost, Heroes, soap operas, Chuck, Glee, and Friday Night Lights, among other transmedia topics. We also raise some questions about whether current transmedia strategies are based on too narrow a conception of fan tastes and interests, often rewarding male fans desires for mastery over the program content, while shutting off female fan’s transformative responses to program materials. We argue that producers need to better understand the value created by audiences that may be surplus to their target audience, but who may matter more and more in a world of engagement-based media.

5. The Future of Independent Media is in Our Hands! Throughout the book, we document many cases where independent media makers have worked closely with their fans and publics to insure that their projects get completed and seen — from the political documentaries of Brave New Film to Nina Paley’s charming animated feature, Sita Sings the Blues. We were writing about the power of Kickstarter long before Veronica Mars, and we place crowd-funded projects in a larger context of a range of different strategies for co-production that are helping sustain independent media production at the current moment. Taken as a whole, these projects demonstrate how independent filmmakers could, at least in theory, collaborate with their audiences at each step of the production, distribution, and promotion process. Independent filmmakers have historically had to give up some degree of control over their films in working with commercial distributors, and some are embracing these collaborative strategies because they feel more aligned with the values and interests of their supporters than with those of commercial distributors. These systems tend to pull aspects of independent filmmaking closer to gift economy logic, where the exchange between artists and audience fosters sentimental, symbolic, and, with luck, exchange value through building feelings of reciprocity.

6. The World Is Not Flat! Transmedia producers now operate in a global context. More and more transmedia companies are working across a range of national contexts, but more than that, they are creating content which is consumed — legally or not — by audiences all across the planet. The world is not flat: media flows unevenly across national borders, and the translation of transmedia content often lags behind the translation of “mothership” content, but a transmedia producer should be aware of those factors that may be spreading their content to new audiences in other markets. Our book looks at many different examples of media content which flows across national borders — including telenovelas for Latin America, Bollywood films from India, anime from Japan, or action films from Nigeria. We explore the ways that this content enters a new market often through collaborations between immigrants seeking content from their homelands and pop cosmopolitans seeking content which is different from the same-old-stuff from their local market. Here, as with other spreadable content, media travels because it can be made meaningful for the networks that help pass it along. We argue that initially at least, some forms of “piracy” help to open new markets and may increase rather than decrease the value of your content.