It’s harder to make money this time around. 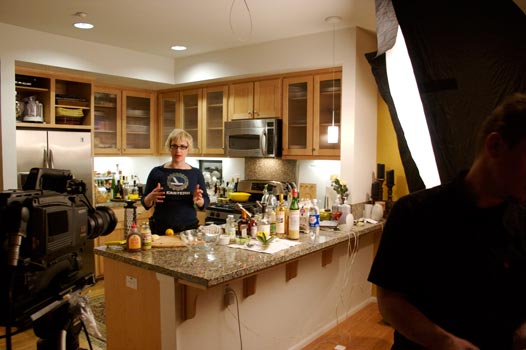 If you’re reading this blog hoping to learn – with post-humus apologies to Douglas Adams – The Answer to Life, The Universe, and Everything (view on Amazon)

, I’m afraid we may disappoint you from time to time: We don’t know all of the answers. But sometimes just asking questions is important, because it starts the discussions which eventually lead to the answers.

One question that’s floating around these days is “How the heck do I make money creating video content for the web, such as podcasts?” Indeed, it seems there is more money in teaching podcasting than in podcasting itself!

Desktop video was a booming industry in its early days because the math was so strongly in its favor: Thanks to the explosion of cable and satellite TV channels, there was demand for a lot more content to be created. However, the amount of advertising dollars available to support all this new programming was not going up by the same amount. Therefore, the market was ripe for those who could create quality content for less.

What was working in our favor was that desktop tools provided that quality for a lot less money than the old dedicated hardware system/post house model – so we could create high-production-value content for a lot less.

The quality part of that equation was important. In the old days, you could get away with lower quality if you were a “local market” – no one expected local channels to have the same quality as the national networks. However, cable and satellite leveled the field, and on a higher plane at that: When everyone could see everything everywhere, the concept of a “local market” substantially disappeared. Not only did the viewer expect all channels to look equally as slick and professional, a new channel had to raise the bar even higher to stand out in an increasingly crowded market (anyone remember how fresh and daring ESPN2 looked when it launched?).

Now we’re in a new phase where it’s websites that are craving additional video-like content. The equation initially looks familiar: Clients want more content, but have less advertising money per show to pay for it. Indeed, advertising to support web content is currently scant compared to television, while pay-as-you-go isn’t doing very well either.

However, the desktop video revolution has already happened; most content producers are already using desktop tools and inexpensive digital cameras. In other words, there are no obvious radical reduction in costs immediately at hand to offset the lack of income.

Working in our favor is that we’re getting a pass for now on the quality issue: The popularity of user-generated content such as YouTube has lowered expectations on that front – but I would argue (perhaps incorrectly) that it’s just a matter of time until viewers expect the same level of quality from web-delivered content as they do from broadcast or cable-delivered programming. 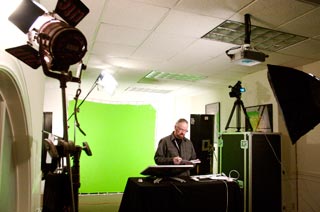 So where is the money to be made? One answer may be in efficiency. Alex Lindsay and the gang at Pixel Corps have been honing the art of cranking out high-quality podcasts on extremely tight budgets. One step includes filming a large number of episodes in one shoot, gaining efficiency in setups. This helps during both production and post production: For example, if you know the greenscreen background is lit the same from shot to shot and program to program, then the keying plug-in settings you craft for one shot can be applied virtually as a preset for the others.

Ironically, pursuing higher quality may be another step which can help lower your costs. Rigorous standards during the shoot – such as using high-end cameras and top-notch lighting techniques – also make it far easier to pull keys and create finished video with a minimum of extra post-production work.

The Pixel Corps also wrings out additional savings by going to great lengths to automate common tasks, such as using what are in essence fancy spreadsheets or word processors to plug in text needed for lower thirds and the such by directly editing the XML files used by programs like Apple Final Cut Pro and Motion. Although its currently a niche market, other companies are eventually going to have to open their project file formats as well in order to remain attractive to these producers.

It is indeed a tough world to make money in right now. But if you can figure out how to break even today, then it’s going to be far easier to be profitable later as more advertising revenue switches over to the web. In the meantime, we’d love to hear any ideas or opinions you have about how to pull this off, so we can all learn together – post a comment below and continue the discussion!