Video scopes are one of those things we often take for granted. Most all NLEs have video scopes somewhere in the software. They are very important when it comes to the color grading / color correction process but many of those working in post-production don’t really know how to properly use them (I say partially raising my own hand). Sometimes it’s a matter of making the right window arrangements to use an app’s built-in scopes but if you don’t save that window configuration then you’ll be less prone to use them when the time comes. Enter a product like ScopeBox which is $100 stand-alone video scope software. Video scope software, for the most part, requires its own computer and hardware to run, but ScopeBox 3.3 breaks that tradition with a new feature called ScopeLink. 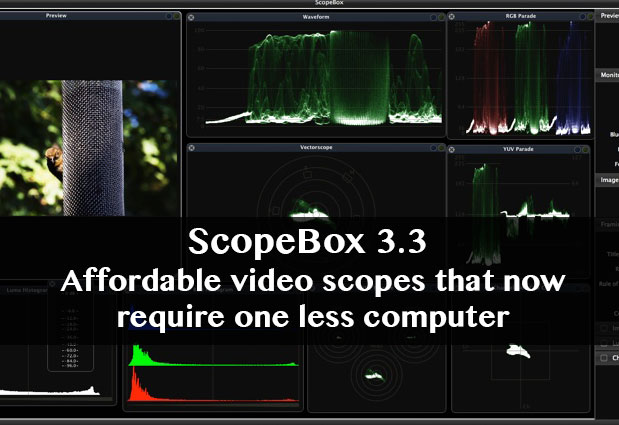 Before Divergent Media introduced version 3.3, ScopeBox required a whole separate computer besides your main edit system to work. You would pump a video signal out of your NLE’s installed video hardware and into a separate computer with both video input hardware and the ScopeBox software. The separate computer took that video signal and processed it to display in ScopeBox. The addition of the ScopeLink feature eliminates that need for a second computer for some workflows and should make the tool usable to an untapped market of editors out there. As in those that don’t have a dedicated computer to run video scope software.

The Divergent Media engineers have figured out a way to take the video signal out of (currently) Adobe Premiere Pro and After Effects (using some technology in Mac OSX 10.8) and pump that into ScopeBox. Viola: no need for a second computer to run it. ScopeLink is what this technology is called and it’s a brand new source located in ScopeBox’s Source menu. 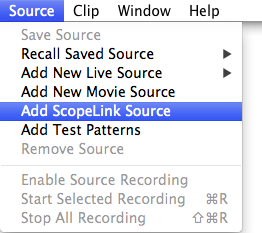 Choose ScopeLink as the source and your need for a dedicated computer to run ScopeBox may have gone away.

Your first time adding ScopeLink as a source will prompt you to install the components to make ScopeLink work. A trip to the Adobe Premiere Pro Playback preferences after the install reveals a new playback option. 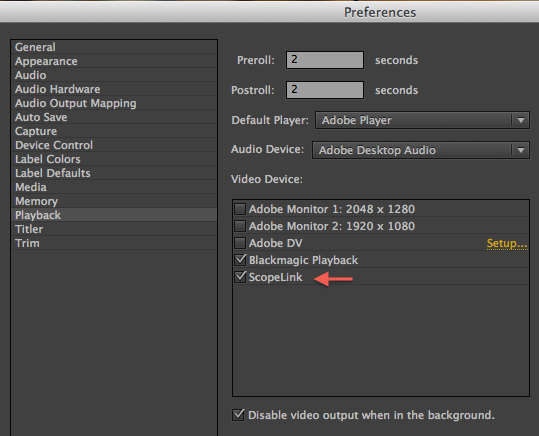 After the component install ScopeLink will appear as a new playback preference.

Toggle that on and your image will then be there in ScopeBox. It’s very simple to setup and I didn’t have any trouble getting the ScopeLink option to work in either PPro CS6 or After Effects. Although it’s not officially supported as of yet I was also able to get it working in PPro CC (that’s the next Creative Cloud version of Premiere). Sometimes when starting up ScopeBox wouldn't see PPro when adding the ScopeLink source. When that happened I would have to go into the PPro Playback Prefernce and toggle the ScopeLink Video Device on and off.

If you look above at that playback preference from PPro you’ll also notice that the Blackmagic Playback preference is checked as well. PPro’s Mercury Transmit will still work even when ScopeLink is turned on. This is rather important because anyone using a grading monitor for their color work will definitely want to still see their signal on that external monitor. I could see a setup where an editor with two edit monitors and a client monitor could position ScopeBox on one of those computer monitors when grading, have the NLE interface on the other and the output on the external monitor. That’s an “external” video scope without the need for another computer with video I/O.

ScopeLink is there in the After Effects Video Preview preferences as well. You’ll only have one option for Output Mode after choosing ScopeLink under the Output Device.

One of my favorite features of ScopeBox (over one of its biggest competitors like Blackmagic’s UltraScope) is its customization. You can turn on and off about as many palettes as you want and arrange both the size and placement of those windows. From a purely post-production standpoint this is great as you may have a configuration where you only want to see a big RGB Parade and a big Vectorscope for basic grading and then another configuration where you would want to see just the source video and audio meters while you’re editing. The ability to save and recall those different palette configurations is a very useful feature. 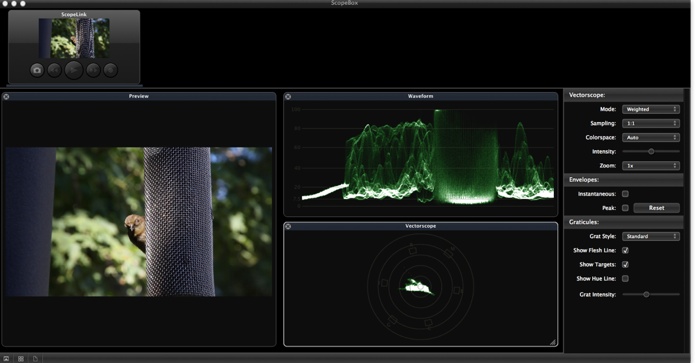 Above is a standard ScopeBox layout but thankfully the interface is very customizable.

This brings up what could be a nice use of ScopeBox but one that might be beyond its intended use. Using some of the built-in tools like the signal preview window, the audio meters and the various crop overlays ScopeBox could be a monitoring tool as well. I’ll sometimes gather all my NLE windows on one monitor and put ScopeBox into a “viewing mode” on the other while I’m working on an edit. One thing that currently doesn't work via the ScopeLink feature are the Audio Meters and Timecode. This might be a limitation of going from software to software but if not I hope the developers add audio monitoring at least. 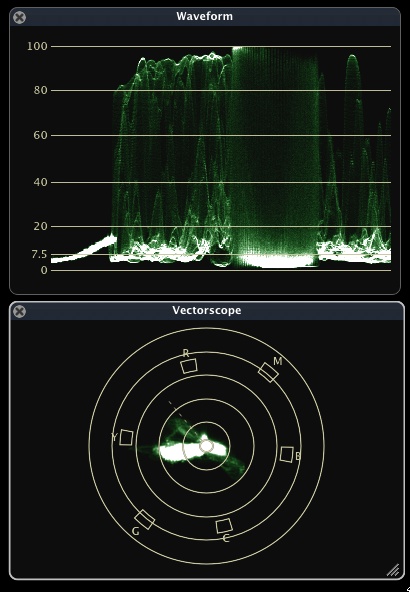 Above you can see a bit more detail of exactly how the scopes look. 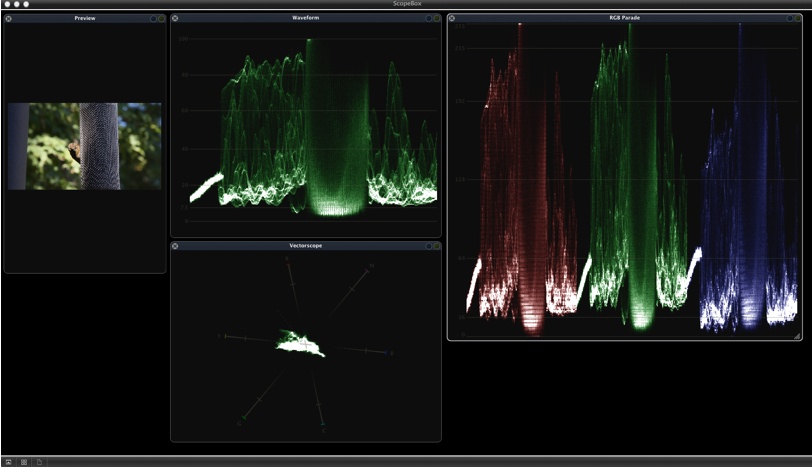 This is probably my favorite layout with a big RGB Parade as well as both a waveform and vectorscope.

The one downside of this configuration flexibility is that you’ll probably spend a lot time dragging around those window locations and sizes to get a configuration exactly right. ScopeBox wants you to grab the bottom right corner of a window to resize it. Other windows don’t resize dynamically as you drag over them so there’s a lot of repositioning. It’d be nice if you could grab both edges of a window (or the intersection of 4 windows) at once to change the size of them all but currently you can’t. You can turn on window snapping to that helps as you set up a configuration. 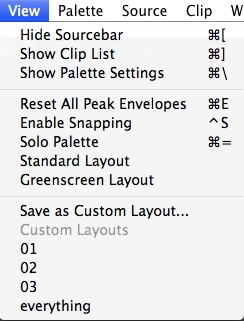 One of the best keyboard shortcuts to know is the Solo Palette shortcut. That will take the selected scope palette full screen within the ScopeBox window. 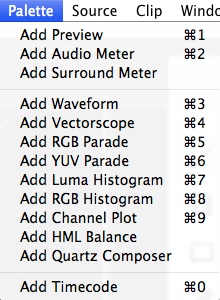 Many different palette options means ScopeBox can display a lot of information about a signal.

Last Page: Performance, working with small developers and some other features and images

As you’re doing layout configurations (and even working in ScopeBox itself) keep an eye on the View menu as there’s some handy keyboard shortcuts you’ll come to need. Hiding both the source bar at the top and the palette settings on the side provide more screen real estate. You’ll need the palette to adjust settings for the various scopes available so get to know that keyboard shortcut. 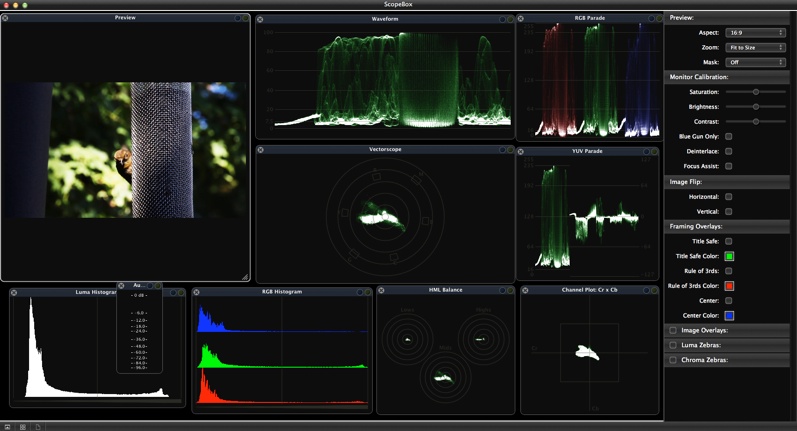 If you prefer you can add a little bit of everything though you might need a big computer monitor to dedicate to the ScopeBox window if you want to be able to see all ScopeBox has to offer.

ScopeBox performance was very good on my test machine: a 2.66 GHz quad-core Mac Pro with an NVIDIA Quadro 4000 GPU. This was using both ProRes and H.264 DSLR media in Adobe Premiere Pro. I would have thought that ScopeBox would really have to slow down its playback framerate when displaying all the scopes in the image above as opposed to just a few scopes but it felt like it kept up well and didn’t start to noticeably stutter. 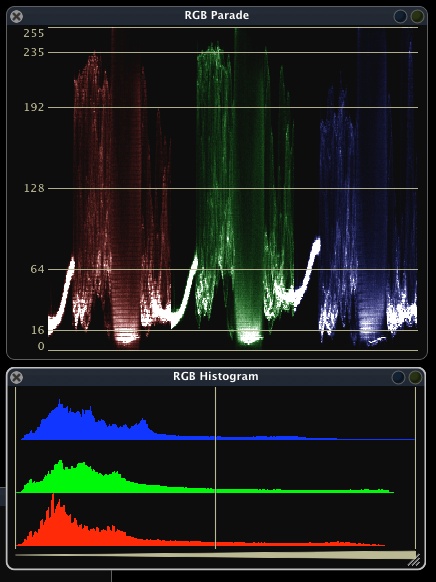 More detail of both the Parade and Histogram options.

How does ScopeBox compare to other video scopes (hardware or software) as far as the accuracy of what it is measuring? I’ll leave that debate to the engineers but comparing ScopeBox via ScopeLink with Adobe Premiere Pro’s built-in scopes it seems very accurate. PPro’s scopes aren’t anything to write home about so any side-by-side companion makes ScopeBox feel like a much better tool. 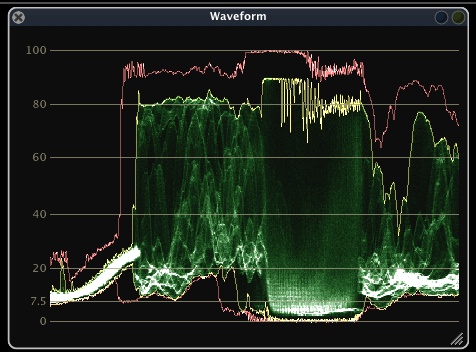 Another cool feature is the scope's ability to show an instantaneous outline are the scope (above in yellow) as well as remember the peak (above in red).

I will relay this story: an engineer at a place where I used to work was evaluating scopes once and questioned whether this “cheap” ScopeBox tool could compare to hardware scopes or Blackmagic’s UltraScope. I asked the Divergent Media guys about this at NAB not long after and was immediately handed a business card to have the post facility engineer call the ScopeBox guys and ask any questions or explain any deficiencies that he saw in the product. I don’t think the video engineer ever took them up on it.

The advantages of small software developers

ScopeBox is developed by a small company called Divergent Media (they also make the popular ClipWrap). Being small means they’re probably more open to user suggestions than say Apple is. That showed recently when PVC’s own columnist Alexis Van Hurkman had an idea for a different type of graticule (those graphs and lines you see in the middle of a video scope) for the Vectorscope. After he discussed this with the ScopeBox guys this new graticule showed up in ScopeBox 3.2 as the Hue Vectors graticule. 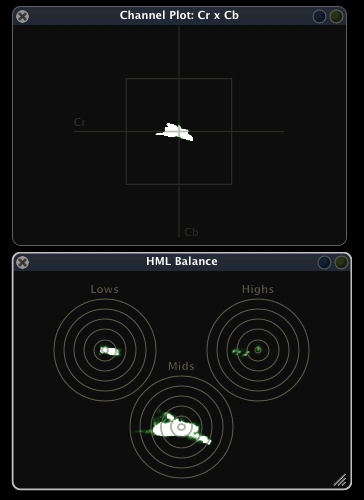 Speaking of Alexis I'm going to have to submit a question to his column again so he can explain to me how exactly to use these scopes above.

It also records too

I’m thinking of ScopeBox primarily as a monitoring tool when editing or grading but it’s also worth noting that you can record sources with ScopeBox. Live overlays, zebra patterns and focus assist mean you can use ScopeBox as a live production tool for both monitoring and recording. Capturing to industry standard codecs like ProRes and DNxHD mean the software has a place outside of the edit suite. 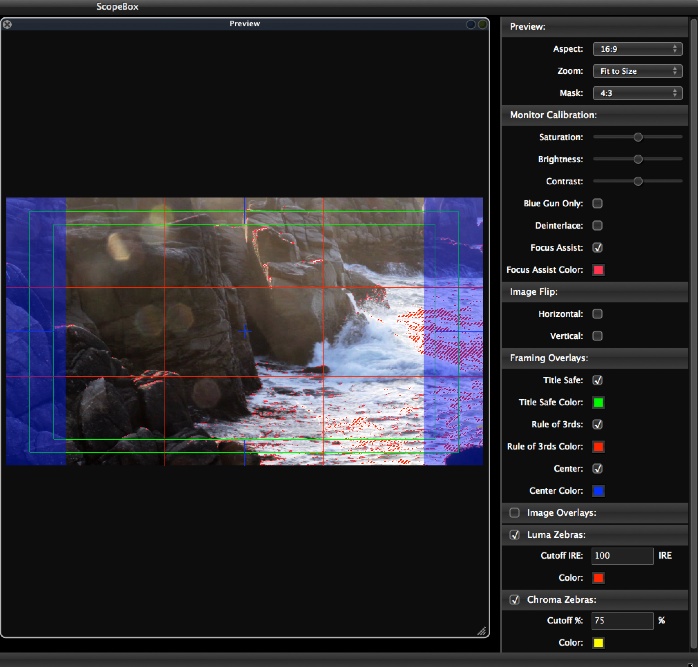 There’s quite a lot of options for making use of the Preview window. Some of them, like Focus Assist, will only be useful if you’re using ScopeBox for live recording and monitoring.

I’ve seen a couple of ScopeBox reviews where they basically just open up Quicktime files and fiddle around with them to show the features. While you can do this and check the levels of a Quicktime (which could make ScopeBox a useful quality control tool I suppose) the real benefit of ScopeBox is to have it running live while you’re working. If you’re doing any kind of color correction then you need video scopes to help read the video signal, whether trying to make it legal, match sources or do any kind of creative color grading. As I mentioned above most all NLEs have video scopes but none of them are quite as nice and flexible as ScopeBox. At $99 price isn’t an issue. There’s even a free demo so anyone on a Mac can check it out. ScopeBox’s ScopeLink feature currently works only in Adobe Premiere Pro and After Effects but the developers “are listening to our customers, and will add support for additional hosts in the coming months based on feedback.” That’s their quote not mine so if you want to see this feature in other apps then let it be known.