The editing profession has lost one of the greats.

Sad news began to filter around the Internet this morning, Tuesday, September 26, that Sally Menke (IMDB profile), Quentin Tarantino’s longtime editor, was found dead near a park in Los Angeles. LA was experiencing record heat yesterday so that may have contributed to her death. The Los Angeles Times article has details as it appears it’s being updated as new news filters in. The video embeded above is from the Inglourious Basterds DVD as the talent involved in Tarantino’s movies would often provide a “hi Sally” to keep her company in the editing room.

I won’t try to deconstruct Menke’s career or anything like that. Both The Joy of Film Editing blog and Frame by Frame have posted nice tributes. What I will do is convey a story as I had the pleasure of meeting and working with Sally one long day some six or eight years ago.

I was working as an assistant editor as a facility in Nashville when I got a call from a studio in Hollywood. They were looking for a place so a major Hollywood editor could do a quick Avid edit one day while in town. They found our name via the Tennessee film production handbook and we had the space and time available. They called us back to book the time for Sally Menke. It was a personal edit that she had to do quite quickly while in town in the coming days. She arrived early on a weekday afternoon with a number of photographs and tapes. I digitized the tapes at full resolution (AVR 77 for those who remember) and we shot the still photos on our Manipulator motion control camera. There was no Avid Pan and Zoom at the time. We worked into the early morning hours as Sally completed the edit (with some friends and family in the edit suite with her) and I assisted both in the suite and in the tape room. We enjoyed a nice coffee late that night as final rendering and output to tape took place.

I remember Sally being very warm and funny. She was more than happy to answer questions I had about cutting features for some of Hollywood’s biggest directors. She was even quite candid about her producing the film All the Pretty Horses. I remember a number of technical things about the Avid that she didn’t know and joked that it took a good assistant to make and great editor. Near the end of the evening (which was closer to the next morning) she grabbed a Post-It note and a red wax pencil (that we then used to write on VHS tapes before they were labeled) and jotted down her phone number. 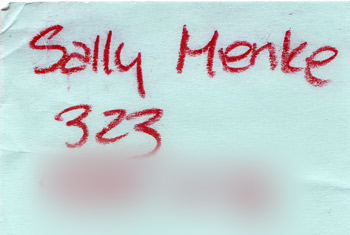 “Call me whenever you get to LA” she said. I never followed up with that contact. I had never forgotten about it (always knowing right where that Post-It note was located all these years) but for whatever reason, a reason that in light of today’s news makes absolutely no sense at all, I never followed up. I was even encouraged by a couple of editor friends who work in LA to take that phone number and give her a call, even after all these years. It’s too late to do that now. Not following up with Sally Menke is without a doubt the greatest professional regret that I have. As a word of advice to those who are starting out in their editing careers: always take an opportunity like that if it’s dropped in your lap.

I’m just glad that she was able to build a great catalog as an editor as her work has entertained us for years. I’m grateful I had that one long session as her assistant. Thank’s Sally … you and your work will be missed.