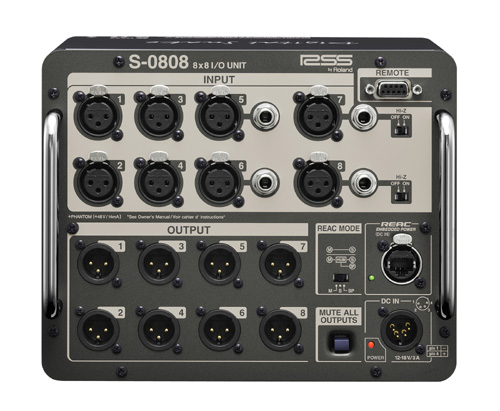 The S-0808 Digital Snake is an 8in/8out compact, lightweight digital snake that supports multiple power options including battery-power, embedded-powered over REAC and power over Ethernet (PoE). The inputs offer remote controllable preamps, phantom-power, 24-bit 96kHz A/D conversion as well as choices of XLR, TRS line and even Hi-Z capability to reduce the need for direct boxes. The included side-mounting adapter plate with the S-0808 enables IDX V-Mount or Anton Bauer Gold Mount battery systems to be conveniently attached to the side to power the S- 0808.

The versatility in power and input choices make the S-0808 ideal for location sound, festivals, stage boxes, remote broadcasting and other portable applications.

Transfer both audio and power over Cat5e cable to the S-0808 using the RSS S-4000D Splitter and Power Distributor or the newly announced S- 4000M REAC Merge Unit. The S-4000M powers up to four S-0808 units and enables the merging of all connected I/O into one REAC stream. This allows distribution of 8×8 I/O units in a variety of locations where AC power is not available or not practical to run.

Pair two together for a complete point-to-point 8×8 snake system or use as a stage input box with any RSS V-Mixer – all made possible using REAC (Roland Ethernet Audio Communication) protocol over a single Cat5e cable.

About REAC Merge Technology
The S-4000M REAC Merge Unit allows up to four Digital Snake heads to be merged into a REAC stream where the master device recognizes it as single REAC slave unit. This important technology enables distribution of multiple input/output units around a location, venue or stage for flexible point-to-point digital snake or V-Mixing System configurations.

Connect any combination of the RSS Digital Snake heads such as the S- 4000S, S-1608, S-0816 or S-0808 and merge all the input/output to a single REAC signal. The four ports on the front panel also supply REAC embedded power to compatible devices such as the newly announced S-0808 8×8 I/O Unit.

The intelligent Auto Map function assigns input channels automatically. If the number of inputs connected is greater than the 40 channels allowed by a single REAC stream, choose which inputs go to which channels using the free remote control software (S-4000RCS) or directly using a M-400/M- 380 V-Mixer when using as part of a V-Mixing System. The S-4000M also serves as a distributor of outputs and/or splitter. Any inputs returning from the master (Port A) are distributed to the outputs
depending on the devices connected. When S-0808 units are connected, specific output assignments can also be mapped.

About REAC
REAC (Roland Ethernet Audio Communication) is the audio transport protocol developed by Roland to meet the Pro-Audio market’s need for a point-to-point 24 bit/ 96kHz, low latency digital audio transport for live sound use and commercial applications. The REAC protocol is capable of transmitting 40 channels of 24bit / 96kHz audio over inexpensive Cat5e cable and can be easily split using standard gigabit switches making it easy and very cost effective to have lossless all-digital splits of the stage audio for FOH, monitor, broadcast and recording locations. Products using REAC technology are installed today in many venues and have been
used for high profile events worldwide.