I’ve spoken about noise reduction in a few posts in the past. Most recently I discussed various approaches to this in week 11 of this series here. One of my most trusted tools for noise reduction is RX. At NAB a couple of weeks back, the wizards at iZotope released the latest iteration of RX – version 6.

I wanted to take a deeper look at some of the things that they’ve added to enhance this suite of noise reducing tools. I’ve been a power user of RX since version 1. The engineer magicians at iZotope just keep refining their algorithms. This really has been a game changing product and I don’t know any audio professional who doesn’t use it.

In this latest update, several new tools have been added. They continue to add processes that help minimize, if not eliminate, very specific noise issues. These tools can be used as offline processes in, for instance, Pro Tools as Audiosuite plug-ins. They can also be used as real time inserts, processing audio as it plays in a session. But their real breakthrough came a couple of versions back, when they introduced their audio editor package, which round trips between RX and the host program.

I would suggest hitting their site and taking a deep dive into each of the modules. Here I will take a look at a few of the new offerings. Be aware that De-wind, De-rustle and Dialog Isolate are only included in the advanced package.

De-wind is a module to reduce wind noise that hits the diaphragm of mic during recordings.

De-wind removes the low frequency rumble that can occur when light to moderate bursts of wind come into contact with a microphone diaphragm. It can intelligently analyze the recording and find and minimize wind noise. Like many of these processes it often better to take several light passes on reduction rather than try to do it in one fell swoop. This tool is intended for intermittent wind. Spectral Denoise is recommended by iZotope for more constant and problematic wind issues. Here’s a look at their controls for this device. 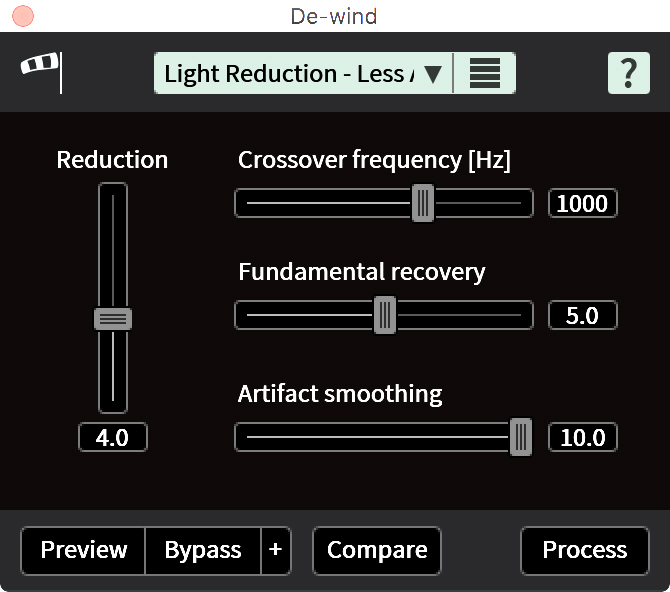 The Reduction Slider determines the amount of wind to be reduced from the recording.

The Crossover Frequency is a fine tuning slider to adjust the frequency of the wind since wind is a broad frequency issue. This is a handy addition to determine the exact frequency needed for the reduction.

Fundamental Recovery intelligently adds back voice harmonics that might have gotten lost in the wind noise during the recording.

Artifact Smoothing helps fine tune the occasional noise that can be introduced in the reduction process.

De-rustle is a module to reduce microphone jostling.

De-rustle reduces the noise or rustle generated by a lavaliere microphone rubbing or brushing against a person’s clothing during a recording. Lav rustle can vary unpredictably over time and exhibit a wide variety of sonic characteristics from high frequency “brushing” to low frequency “thuds.” iZotope used deep machine learning to train their algorithms to separate speech from rustle noise. Here’s a look at some of the controls. 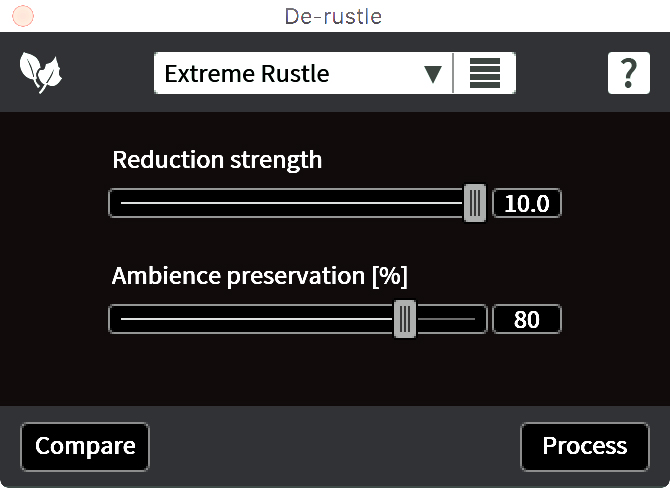 Reduction Strength obviously determines how the device looks for dialog and reduces the rustle.

De-plosive is a module to eliminate popping sounds from voices into microphones.

Plosives are defined as a noise blast from speech, typically Ps and Bs and other problematic letters. These typically hit the microphone in the lower end of the frequency range. This tool analyzes the recording and determines where the plosives are and minimizes them. Here’s a look at some of the controls available. 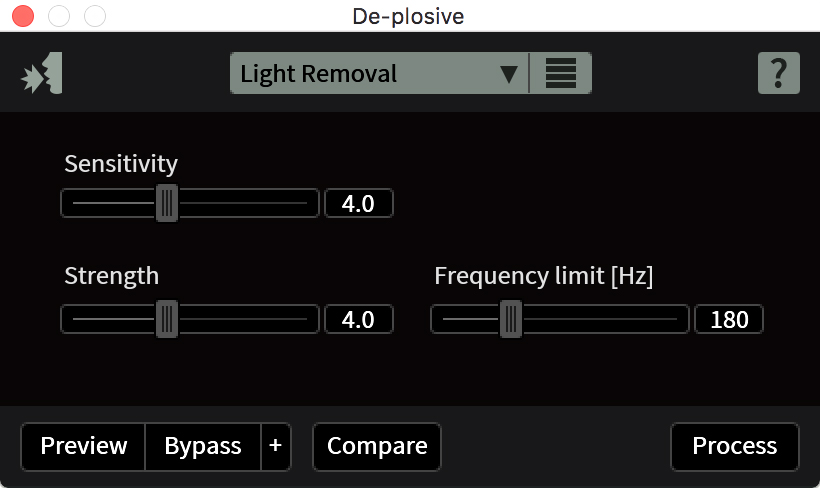 The Sensitively slider determines the analysis of the recordings plosives.

The Strength slider determines the amount of reduction.

The Frequency slider helps fine tune the device to find the range of the frequency of the plosives.

Mouth De-click is a module to reduce or eliminate mouth induced noises.

When actors or voice artists are speaking often there are all sorts of additional sounds besides the words themselves. Lips smacks and saliva clicks are typically a part of these recordings. There are tools already in the RX tool box we use for this, specifically the De-click module. This new module is an advancement on that tool and made specific to mouth noises. Here’s a look at the controls. 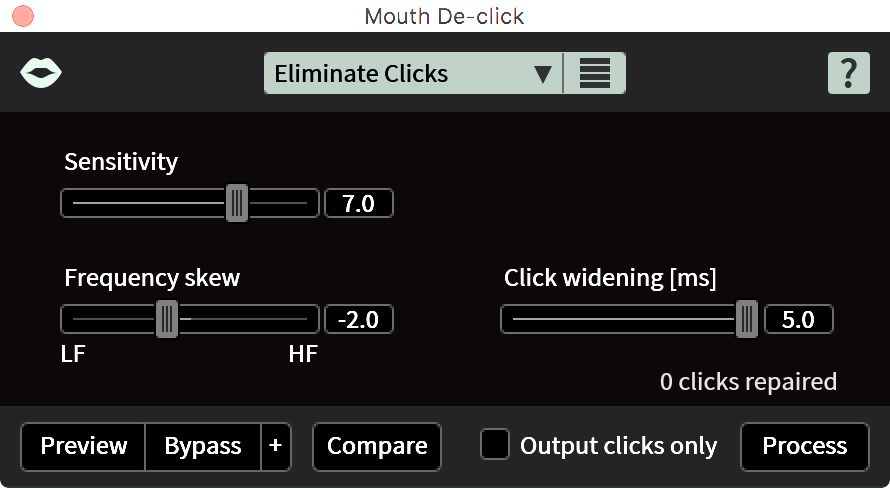 The Sensitively slider can determine the depth of the analysis of the recording for mouth induced click and pops.

Frequency Skew looks through the frequencies to find the range of noises. A setting of 0 targets the mid-frequency range.

iZotope recommends several small passes specifically for this device. In the removal of larger clicks there may be underlying additional clicks to be found, so another pass will take care of those.

Dialog Isolate is a module designed to look through an audio file and separate out the dialog portion of the recording.

This tool is the crowning achievement of a very sophisticated set of tools. It will read through the specified recording to determine the dialog portions and separate that from noises, such as traffic, weather, and other intrusive sounds. It should also be noted that it can help considerably in raising the signal in a low signal to noise ratio situation. Again iZotope used deep machine learning to separate noise and speech. Here’s a look at the controls for this revolutionary tool. 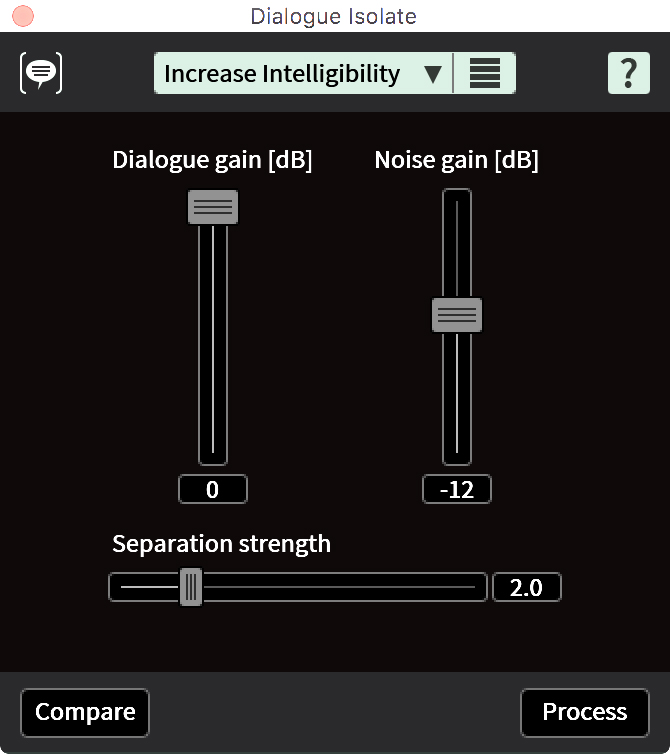 The Dialog Gain can be used to control the dialog and noise in the recording. 0 will reduce the noise and pulling the slider down can reduce the level of the dialog present.

The Noise Gain serves the same but opposite function, raising the slider provides more of the noise and reducing it provides more the dialog.

The Separation Strength slider is used to fine tune the reduction of the noise to the dialog, it can allow more noise through if the signal is being too reduced for intelligibility.

Each of these are an outgrowth of the original processes, refined to individual sound issues. I’ve used De-click for years on all sorts of issues and it’s great now to specifically have a Mouth De-click module. There are all sorts of other wonderful tools in this set. A very handy module in RX is the Ambience Match. This will look into the sound file and remove the dialog completely, leaving only the room tone behind it. This is a great time saver and tool to create room tones that might not have been supplied by production.

When teaching post audio to production companies and students I always emphasize the importance of owning and having a tool set like RX. The advanced version has these tools described above as well as their Insight meter tool. Insight is my go-to meter, I did a presentation detailing its comprehensive look at signals at a recent Los Angeles Post Production Group meeting. Although the advanced version is more comprehensive and expensive, I feel strongly that the additional fees are well worth it. Don’t let price discourage you however, the standard version is a very valuable and cost effective set of modules and is a must have for anyone who works with recorded audio. Do yourself a favor and download a demo today.

iZotope RX 8 Most digital audio and video editing applications come with a robust set of audio plug-ins, but...