Shoot safely at 23.98p with these few simple, but crucial, tips 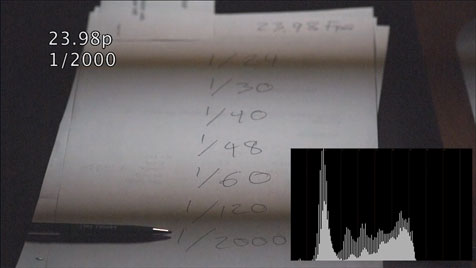 The most common HD frame rate is a 50-year-old byproduct of the invention of color TV. And it’s not a flicker-free safe speed.

Watch the video clip below to see why you should care…

This clip was shot on a RED ONE in order to illustrate the difference between flicker on a global shutter camera vs. a rolling shutter camera. Heres what to look for in the video clip:

-Flicker at 24p appears in certain parts of the frame and remains stationary.

-Flicker at 23.98 rolls upward through the frame as the period the shutter is closed is slightly longer than it is open. (More on that below.)

-The flicker “roll bars” get wider as the exposure time lengthens.

-Flicker reveals itself in a histogram as horizontal expansion and contraction.

After being bitten recently by flickering HMIs fed by old magnetic ballasts, I set out to learn why flicker happens and how to definitively get rid of it. One Tuesday afternoon I met Adam Wilt in his office at Meets The Eye Productions, and we searched the building for a truly awful fluorescent light. His desk lamp proved most offensive, with a visibly unstable magnetic ballast, so we shot the above tests to see when flicker happened… and when it didn’t.

First, though, a word about NTSC and how it created the massive flickering headache we now enjoy:

While our power mains operate at a line frequency of 60hz, our television signals don’t. One of the issues in the development of NTSC color television was preventing the color subcarrier from interfering with the audio signal. The solution required changing the video frequency to 59.94hz from 60hz. (Click here for the long version, complete with math.)

Our most common HD frame rate, 23.98p, has its roots in that decision. Early cameras, such as the Sony F900, offered a diverse series of frame rates, several of which (24p and 30p) proved nearly useless. The 24p option was intended only for film output, but as most film projects live on via broadcast television and DVD, both of which operate at 59.94hz in the U.S., it is often easier to simply shoot 23.98p and increase the frame rate slightly for film output. This is not always the case, as a number of film-destined productions have opted for true 24p, but 23.98p is the more common choice. 30p has proven popular for projects destined only for presentation on the web. Those six extra frames make life easier for graphic designers and animators, who can more easily avoid annoying strobe effects by using a faster frame rate.

Some cameras hide 23.98p behind a 24p setting, apparently to avoid confusion. For example, the Panasonic Varicam 27F/27H cameras don’t offer a 23.98p option, only 24p; but as the camera’s system clock normally operates at 59.94hz, 24p is actually 23.98p. In order to attain true 24p the system clock must be changed in the menus to 60hz.

Here’s a graph of a sine wave:

This represents three cycles, or hertz, of alternating current, with each cycle containing one positive (above the line) and one negative (below the line) peak. To an HMI or other gas discharge lamp, this represents six pulses of light. Gas discharge lamps emit light pulses every time the sine wave peaks–even when the peak is negative (below the center line). All such lights incorporate a ballast, and one of the ballast’s functions is to rectify the AC power and convert it into constant voltage DC power.

For those of us who know enough about electricity to plug in a lamp but not so much that we can avoid the occasional painful shock, the upshot of rectification is that the negative portions of the sine wave are converted to positive values:

Every one of these peaks indicates a full-strength light pulse, with the left side of the peak being the ignition part of the cycle (where the electrical charge builds and stimulates the gasses in the lamp to full brightness) and the quench part of the cycle (where the power dissipates and the gas’s luminosity fades). In theory every peak is the same, as is the trough (the valley between the peaks), but Adam tells me that is occasionally not the case with fluorescent lights (and may not be with HMIs) using magnetic ballasts:

Most film cameras incorporate an optional 144-degree shutter for use with discharge light sources. Before the advent of square wave and flicker free ballasts the 144-degree shutter offered the safest way to avoid flicker. The standard speed for film cameras is 24fps: 120 pulses divided by 24 fps yields 5 pulses, of which 2.5 are seen with a 180-degree shutter. In theory that frame rate should be perfectly flicker free, as every frame receives the same number of light pulses… but it isn’t. Depending on when the camera starts rolling that extra half cycle can appear anywhere in the sine wave, meaning that this extra half cycle could extend from peak to peak, trough to trough, or somewhere in between, resulting in differing exposures from shot to shot. Worse, if the speed of the camera and the frequency of the power grid are out of sync at all, flicker would appear very quickly as some of the frames see slightly more or slightly less than a half cycle.

Setting the shutter at 144 degrees means that every frame sees exactly two light pulses, period. No matter where the sine wave is when the camera comes up to speed, every frame will receive the same amount of light as long as the camera runs at a true 24 fps and the power grid or generator maintains the power frequency at 60hz. Regardless of how well the negative peak is rectified, each frame will always see a total of one normal peak and one rectified peak.

If the camera speed or mains frequency drifts slightly, the odds are much better that the lack of sync between camera and power frequency will remain hidden at 1/60th of a second, whereas it will show up very quickly at 1/48th as the extra half cycle will appear at a different place in the power cycle with each exposed frame.

Now we enter the realm of modern HD cameras. In the U.S. and other NTSC/60hz countries, we live in a world where 23.98p is the magic number for broadcast and DVD media. Applying a 2/3 pulldown results in proper 59.94i broadcast-ready media, and more media is broadcast or distributed on DVD than ever appears projected on film.

The 24p exposure always sees the same number of both rectified and non-rectified peaks and troughs, at the same time in every frame, with the extra half cycle appearing at the same part of the cycle every time; whereas the 23.98p exposure drifts in time across different combinations of rectified and non-rectified peaks and troughs, with the half cycle appearing at a different time of the cycle in every frame.

This shows the difference in shutter speeds between 24p and 23.98p, with a 1/48th shutter dictating how long the shutter is open:

Shooting at 23.98 with a 180-degree shutter should work well with flicker-free or square-wave ballasts, which are specifically designed not to cause flicker, but if there’s even one magnetic ballast in use, or any discharge sources in the shot with aging or bad ballasts (such as practical fluorescents in a ceiling), all bets are off.

There’s a significant difference between how flicker manifests itself in global shutter cameras versus rolling shutter cameras. Global shutters tend to display flicker as an overall brightening and darkening of the affected area, while rolling shutters tend to see flicker in horizontal bars that remain stationary at 24p but that roll slowly up the frame at 23.98p. The vertical width of the horizontal strips is affected by the shutter speed: longer shutter speeds tend to make these bars wider and fainter, making them hard to spot on location or in a viewfinder.

This kind of flicker can appear as a slow “rolling” motion on a waveform monitor. Below is a clip from a short film I recently shot on a RED ONE camera. During this shot an HMI started to flicker visibly, and we took it out of commission immediately after this take. Bars can be seen rolling up the image, although we were fortunate in that they were faint enough that they weren’t terribly distracting on playback. But it’s easy to see the bars on a waveform monitor:

Scrub through the shot if the bars aren’t visible. They’ll reveal themselves quickly.

Global shutter flicker generally shows up as an overall brightening and darkening of the affected image area. Rolling shutter flicker causes roll bars that show themselves as a vertically expanding and contracting waveform.: highlights move upward as mid-tones descend, and then the highlights retreat as the mid-tones move back up.

This was the circled take, and it appears in the final project. It screened in a local film festival and nobody noticed the roll bars. We got lucky.

While shooting tests with Adam I noticed that the RED ONE’s RGB histogram is an excellent flicker detector. If flicker is significant enough in the frame, the right edge of the histogram will expand and contract in response. Certain fluorescent light fixtures change color over the course of a power cycle, with the ignition portion of the cycle appearing green and the quench portion appearing magenta, causing the RGB values to further fluctuate in relation to each other. The Final Cut Pro histogram in the first video clip shows luminance only, but the flicker is still detectable if one pays less attention to how high the histogram’s peaks are and more to whether its width expands and contracts.

With Adam’s help, I learned three very interesting things from this test:

(1) When using a rolling shutter camera set to a true 24p frame rate, any flicker appearing in the frame will most often appear in the same portions of the frame; whereas at 23.98p the flicker will drift vertically through the frame, giving the appearance of roll bars. This is because the frequency of the camera and the frequency of the power mains are not in sync, resulting in the rolling shutter seeing peaks and troughs in different portions of each frame.

(2) The only truly safe flicker-free shutter speeds for 23.98p shooting are fractions whose denominator divides evenly into 60hz: 1/60, 1/30, 1/20, 1/15, etc. This guarantees the same number of cycles will be seen in every frame, negating the need for the camera and power frequencies to be perfectly in sync.

(3) Setting the shutter to 1/120th or faster reveals any problem light sources very, very quickly. Once identified, it’s simple to observe how those sources react to other shutter speeds.

And on my own I formulated Art’s Law of Flicker-Free Shooting Bliss:

I love my film roots, but it’s time to discard the notion of degrees to describe shutter speed and switch exclusively to fractions of a second. For peace of mind I need to know, at a glance, exactly what shutter speed I’m using. Degrees don’t do that. Fractions do.

Thanks to Adam Wilt and RED’s Stuart English for their technical assistance in the writing of this article.

Art Adams is a DP who once joked on set about “My Friend Flicker.” His web site is at www.artadams.net.

Rēs vēra tempōre vērō is Latin for the “right thing at the right time.” Uncanny really how well-timed the...