This 0.8x lens widens the view and improves geometry.

The wide lens, with its hood and eyebrow, bulks up the front of the HVR-Z5U.

The US$1000 VCL-HG0872K is a 0.8x wide lens designed specifically for the HVR-Z5U HDV camcorder; it bayonets in place of the Z5U’s lens hood. It widens the view nicely with negligible sharpness loss, and it actually improves image geometry through much of the zoom range.

The lens comes with its own massive lens hood / matte box, an immense “eyebrow” (top shade), and a padded soft case to carry the assemblage in. 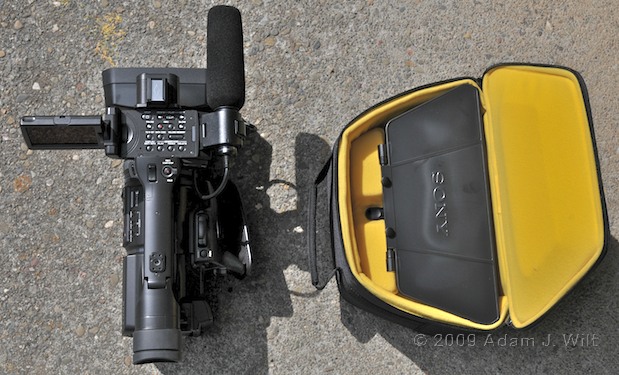 The HVR-Z5U and the lens adaptor in its case.

The kit comes shipped in a cardboard box that’s big enough to put the Z5U itself into. This is not a small setup we’re talking about. 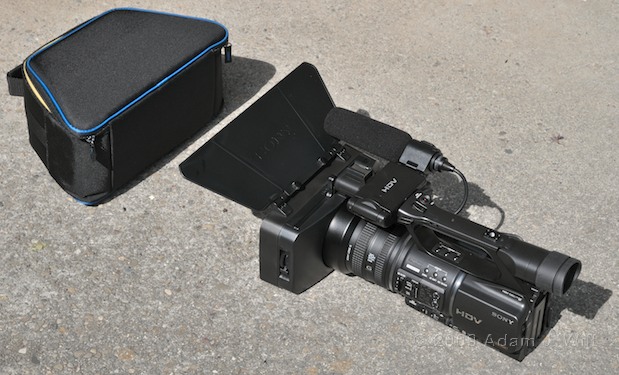 The Z5U with lens adaptor in place.

The lens itself is nearly two inches long, 4.25 inches across (106mm), and it weighs 1 pound 3 ounces. It mounts in place of the Z5U’s lens hood, and like the lens hood, it uses a spring-loaded locking button to secure it in place, so it’s very quick to swap between the wide lens and the original hood.

The wide lens has its own lens hood, complete with lever-actuated lens capping shutter system—but the clear area to be spanned is so vast that the shutters are bi-fold designs, of a type more frequently found on airplane hangar doors than on lens hoods! 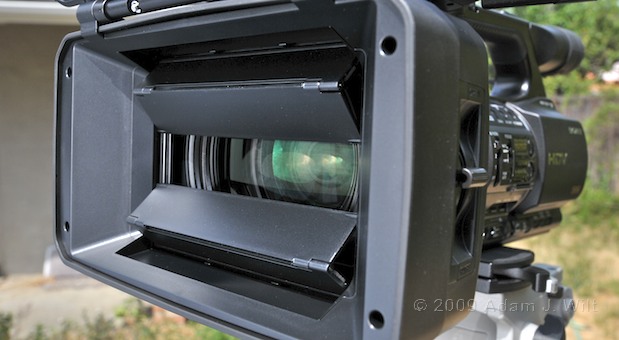 The bi-fold shutters in the VCL-HG0872K’s hood.

The hood clamps to the lens with a thumbscrew, which allows fine adjustment of the hood’s position while providing a secure mount. In practice, once you fit the hood, it rarely needs to come off, as the soft case holds the entire assembly in its built-up state.

A large eyebrow (the top shade commonly seen on cinema matte boxes) mounts to the hood with two thumbscrews. It can be folded down flat across the front of the hood for storage or opened to any appropriate angle. Sony warns that having the eyebrow opened up too much will affect sound recording: it tends to shield both the built-in mikes and the short shotgun from direct sound, and if it’s opened more than 45 degrees above horizontal it’ll whack into the mike itself. The eyebrow can be removed for working in tight quarters, as can the entire hood.

The hood itself isn’t just a hood, it’s a matte box: it has a single, non-rotating holder for a 4.5″ x 5.65″ rectangular filter. The filter holder has a proper locking tab so that the filter won’t fall out as you insert or remove the holder. 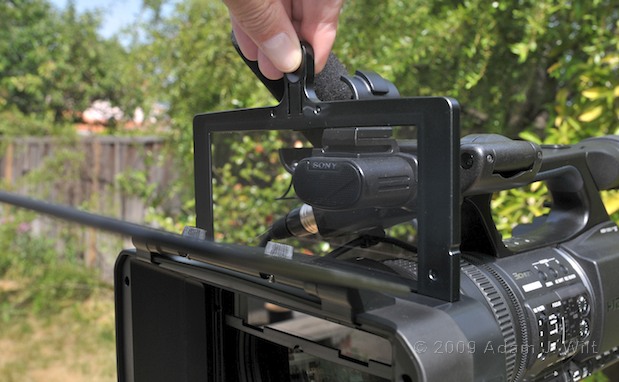 Fitting an ND filter into the matte box.

The holder slides into the top of the matte box far enough forward that it clears the built-in mikes, but the short shotgun blocks the slot. Since that mike’s shockmount uses a quick-release latch, it’s easy enough to flip it open to get the mike out if the way; alternatively, loosen the thumbscrew on the hood and rotate it sideways enough to slide the filter in or out. (Of course, you might choose to mount the mike in a separate shockmount, or even on a boom pole, so that it’s out of the way both mechanically and acoustically!)

With the wide lens in place, especially with its hood attached, the HVR-Z5U is transformed from a mild-mannered, reasonably well-balanced handycam into a massive, front-heavy monster. Handholding the beast unaided is definitely a two-handed affair, and you won’t want to pull your left hand away even for a moment. Using a shoulder mount, beltpod, or other support system helps a lot, and you’ll want to look into such things for non-tripod work. On the tripod, I wound up sliding the camera back about two and a half inches to rebalance after attaching the wide lens.

The lens nicely widens the angle of view: 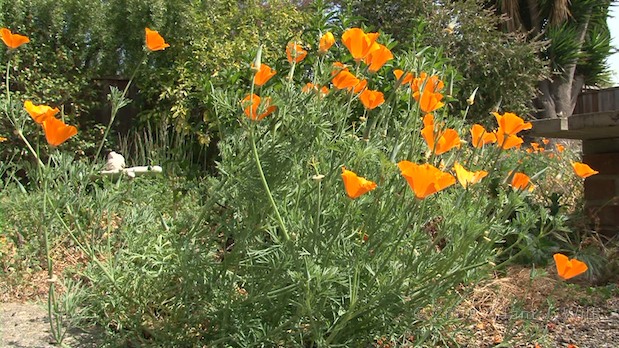 The HVR-Z5U fully wide with its built-in lens. 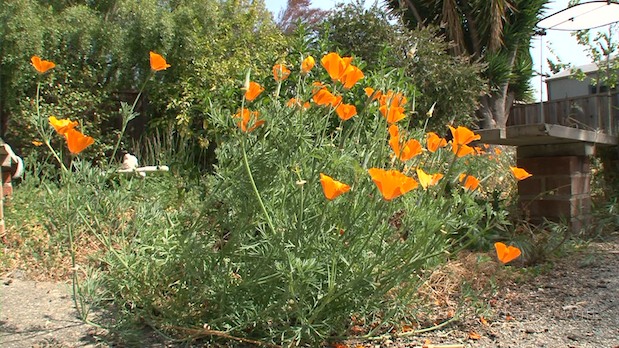 It doesn’t soak up any noticeable amount of light, and it has an almost unmeasurable effect on image sharpness: there is perhaps a very slight softening of the extreme corners of the image when zoomed fully wide, but that’s it. On a resolution chart, the only visible effect is a minor reduction of contrast in the higher frequencies, mostly detectable as a tiny reduction in aliasing above, say, 1000 TVl/ph. On close examination, the edge softening is more due to green/magenta chromatic aberration in the corners than any resolution loss; zoom in to Z10 (on the displayed zoom scale of Z00-Z99) and the C.A. is imperceptible.

The lens has the interesting side effect of correcting the Z5U’s worst optical attribute: a higher than normal amount of pincushion distortion through most of its zoom range.

The 0.8x lens adds a small amount of barrel distortion to the picture, which cancels out most of the pincushioning, yielding a much more geometrically correct picture. At zoom setting Z10, the Z5U with the wide lens is seeing as wide an image as the Z5U sees without the lens at Z00, but with no significant distortion. Keep zooming in and the wide lens cancels most of the pincushioning throughout the range, without adding any barrel distortion at the telephoto end.

At zoom settings wider than Z10, the barreling of the wide lens adds to the barreling of the G lens, and the resulting images have a slightly fisheye look to them, but when you consider that this is the focal length range (in 35mm still camera terms) of 23.6mm to 29.5mm, that may be an acceptable tradeoff.

The lens is a bit flare-prone; direct light raking across its front can cause a greenish veiling haze, and any bright light sources coming into view (or even a few degrees outside of the view) generate multiple radial ghosts, also with a greenish tint. For what it’s worth, the ghosts (internal reflections) are extremely photogenic as such things go, and you might want to exploit them in the same way many shooters like the blue horizontal flare of classic anamorphic lenses. When you’re not in the mood for flare, though, it’s worth using the hood and eyebrow as much as possible to keep stray light off the lens.

The $1000 VCL-HG0872K widens the angle of view of an HVR-Z5U by 20%, but it increases the cost and the weight of the camera by a comparable amount. Is the tradeoff worth it?

I actually prefer the look of the Z5U’s images from Z10 onwards with the wide lens in place; the geometry correction the adaptor imparts improves the pictures more than its minor defects degrade them. Zooming wider than Z10 will show some barrel distortion, but that’s wider than the camera without the adapter will go—and the camera alone at full wide shows more distortion than the camera plus wide lens do at Z10.

The hood’s inclusion of a 4×5.65 filter slot buys you the ability to add a filter without having to spend even more on a separate matte box, something that most wide lenses don’t offer. The hood and the eyebrow are effective at blocking stray light, and add a certain amount of cachet to the camera’s looks, a combination of the serious-artist look of a cine-style eyebrow combined with the usual “my, that’s a big one” appeal of any big lens accessory (grin). The hood’s shuttering lens cap is unique as far as I know among wide-angle adapters, and like the equally effective use-it-never-lose-it shuttering caps in Sony’s standard lens hoods you’ll soon wonder why no one else has such an elegant system (with the deep depth of field of a 1/3″ camera, combined with the forward extension of all that glass, keeping the front element and filter free of visible dust becomes a major preoccupation; having an easy-to-use, always-available cap is a major benefit).

If you’re running-and-gunning handheld, though, the wide lens unbalances the camera and moves it into the too-heavy-to-handhold-comfortably category; if you can’t or won’t use a separate support system, the lens and its hood may simply be too much to handle.

In short: tradeoffs, always tradeoffs. It all depends on your needs. If I were to make the HVR-Z5U my daily shooter, I’d get the VCL-HG0872K; it simply expands the capability of the camera, and I could always remove it when its weight or flare were unwelcome.