I work in After Effects.  A lot, and I always have my “stable” of effects that I find myself constantly going to, and Trapcode definitely has some of those effects.  Red Giant is back with Trapcode Suite 14, the newest release of its popular After Effects plug-ins.  Let’s see what’s been updated in this go around!

Before we jump in and talk about what’s new, I want to mention that if you haven’t updated Trapcode’s effects in awhile, you’re going to need to look for them in a new place, as they are no longer referred to as Trapcode in AE.  You can now find them in RG Trapcode.

What’s important for me to point out with the Trapcode suite, is that when a new release comes along, not necessarily all the effects are updated, so in this version the effects that are the same as the previous release include:

I’m not going to go into any detail about these effects, as they have pretty much been a staple of motion graphic design for longer than I can remember, and instead, I want to focus on the three effects that did receive an update, and that is Particular, Form and Tao.

Particular has taken some interesting steps over the last few years, and it’s been an interesting journey for it, as well as the other effects that Red Giant make. If you’re familiar with Magic Bullet Looks, you’ll know that it was designed with a very cool interface that let’s you expose and hide all the panels you need to work with, so you can keep your work as the center of attention.  Well, Particular’s toolset has been expanded to be more in line with MB Looks, as well as other effects in the Red Giant family (like Universe).  Once applied, you’ll notice that the standard default particle system looks just the way it has since version 1.0 of the effect. 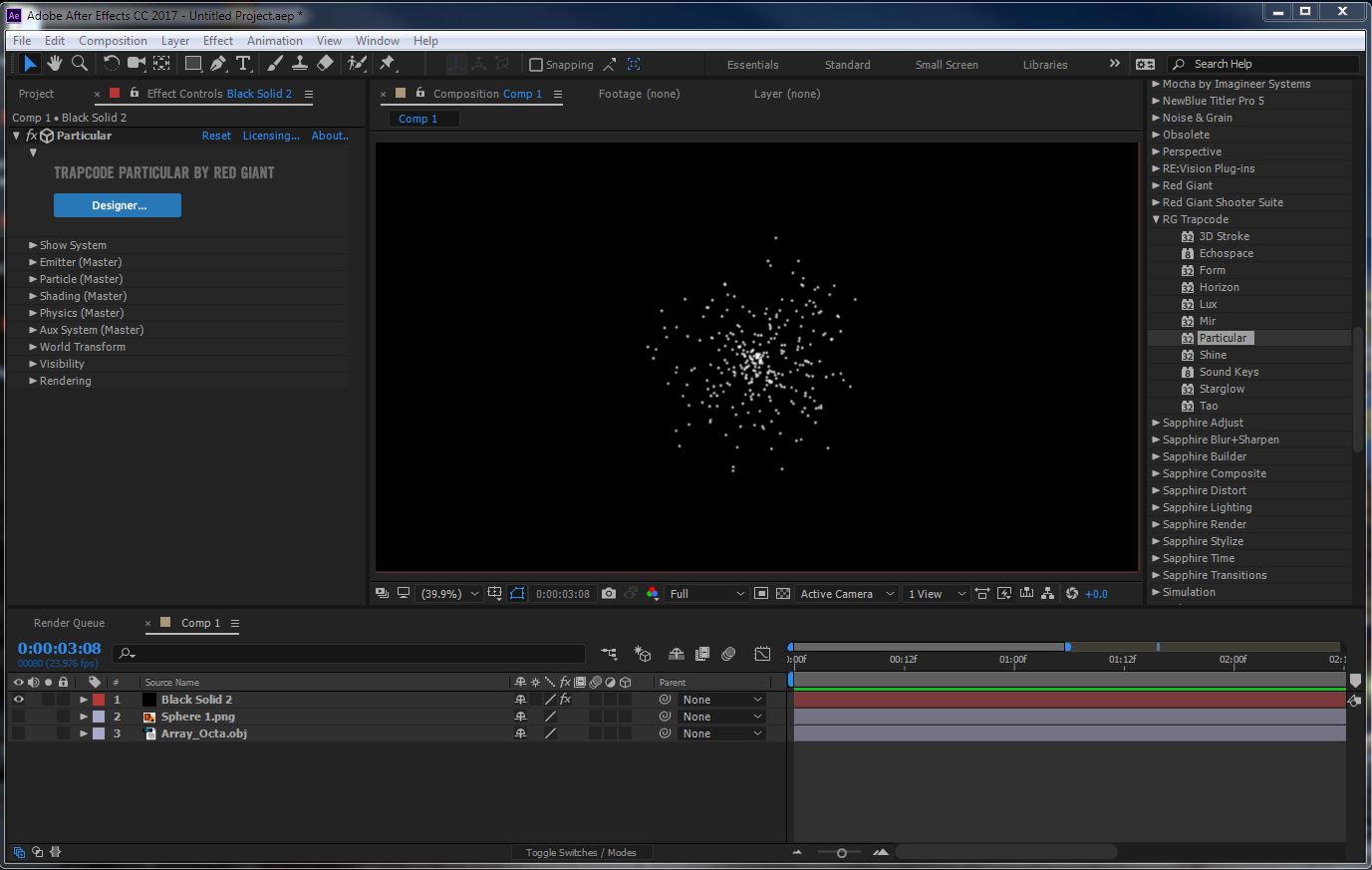 But, once you call up the Effect Controls window, you can click on the “Designer” button to get access the particle designer, to either access the preset window, or begin to create your own particle look. 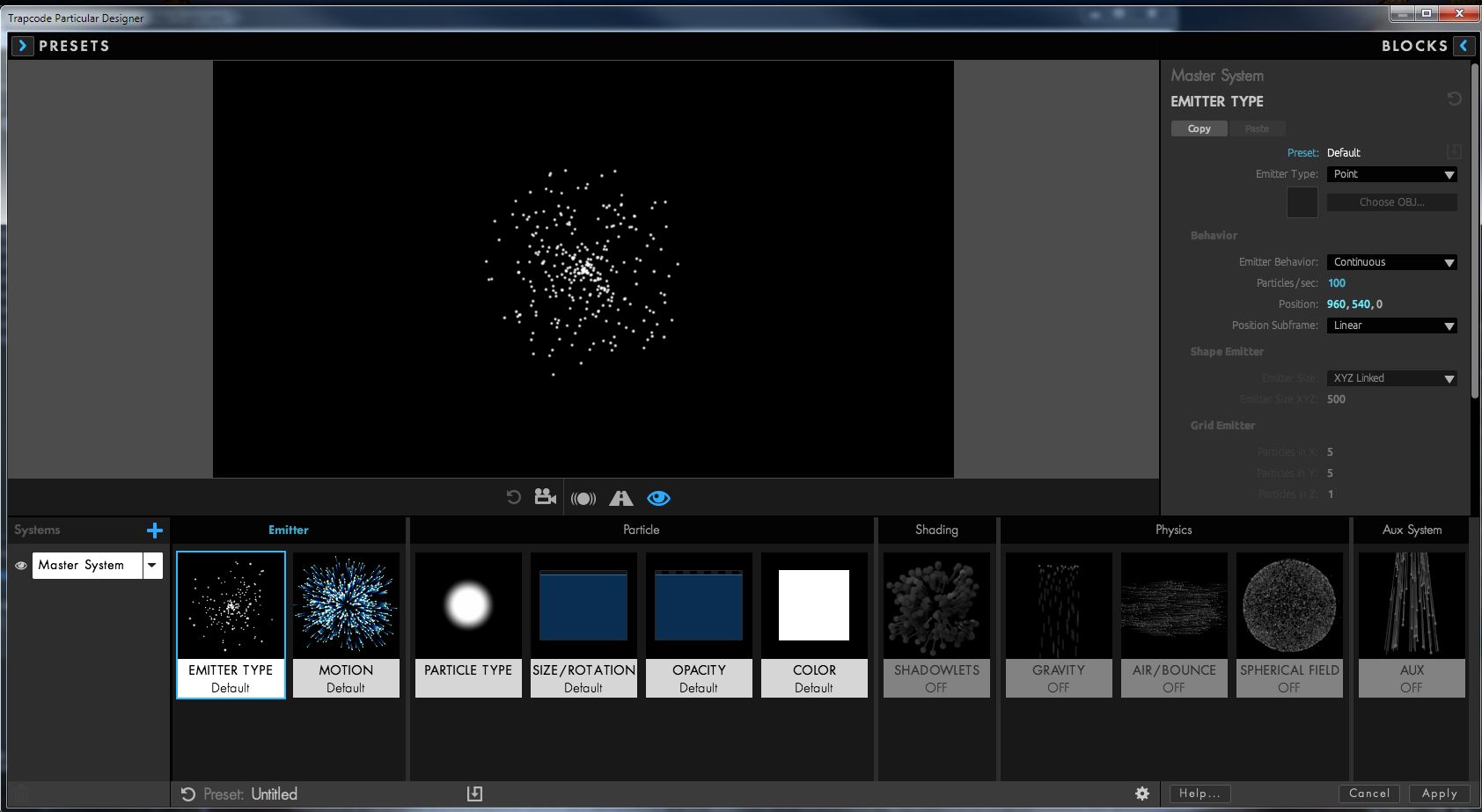 What’s totally awesome is that there are certain presets you can call up, and they don’t appear to do anything, but once you’ve selected them, simply click on the Canvas and start dragging around, and you’ll immediately notice that the Canvas is interactive, and you can get a real-time idea of exactly what the preset will do when you animate it.

Now, Particular’s presets are cool, but it’s the particle building tools that really make this the best particle system generator out there today.  You can move through a very visual interface, and adjust the main parameters from the Emitter to the Particles themselves to Shading, to Physics (Gravity, Air, etc) and even add Auxiliary systems.  The best part is that if you have absolutely no idea where to start, you can pick a preset, and break down the technique that was used to create it, and pull out whatever pieces you need from there.  I did say that Particular 3 was updated in this release of the Trapcode Suite, so here’s a quick breakdown of what’s new!

It’s very interesting that Red Giant decided to focus on Particular and Form for this update, as they are very similar effects to each other, but different in one key way.  Particular’s particles are born, do something in their “lives” (change color, grow bigger, etc), and then they, for lack of a better term, die.  They disappear.  Particular also has an emitter, so you can decide where these particles will being their “life’s journey”.  The difference in Form is that it, much like Particular, works with particles, but these particles are always here.  There is no lifespan, and no emitter.  You choose what “form” you would like the tens, hundreds or even thousands of particles to make.  That’s essentially the difference between the two effects, but how you create your “forms” in Form is very similar to creating your particle systems in Particular.  You have access to over 70 presets in the Form Designer: 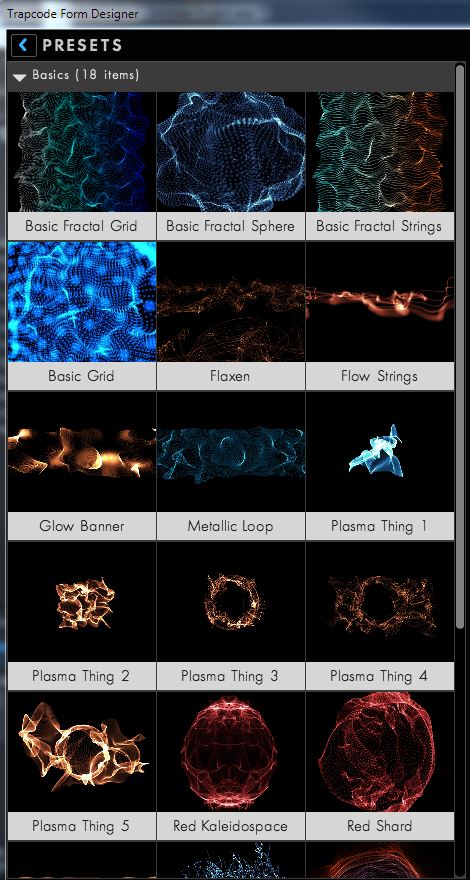 You can create your forms, again much like in Particular, via the tools at the bottom of the Form Designer, and as soon as you click “Apply” it’s immediately available to you in After Effects.  The great thing is that your Forms will interact with AE’s lighting and cameras to make them a seamless part of your compositions.  Here’s a brief breakdown of what’s new in Form 3.

I also want to mention that Trapcode’s Tao did receive an update as well, but it was only to add a new depth-of-field tool makes it easy to create camera-realistic blurs for your Tao objects, based on their distance from the After Effects 3D camera, so keep in mind that the main update to the Trapcode Suite 14 is with Form and Particular.

Here’s where things get a little bit tricky.  The full suite is $999 which, I think, for what you’re getting with just Particular, Form and Tao alone is worth the $999, BUT, and that’s a big BUT, but is the $199 upgrade price worth it when you’re really only getting updates on two of the effects in the package.  If you use Particular and Form a lot, yes it’s definitely worth it, but if you don’t I’m not sure if the $199 would be worth it for you.  If it was $99 or even pushing it at $149, I’d say to update, whether you use Particular and Form or not.

If you haven’t made the leap yet, the package is outstanding, and an absolute must if you’re serious about motion graphics.  For more information, or to download a free trial for both Mac and Windows, you can check it out at http://www.redgiant.com/products/trapcode-suite/ .