A while back I took a look at the Razer Core X, an eGPU for my aging Mac system.  It was nice.  REALLY nice.  However, if you’ve been following along with my articles, you’ll know that I made a switch to a PC desktop that I built specifically for editing, that I’ve been super happy with.  Well, once my Core X review was done, Razer reached out to see if I was interested in taking a look at one of their gaming laptops.  Now, with all the location work I have coming up in the next two years, a laptop is on my horizon.  Obviously, something I can’t build, and I’m going to need to go with either a Mac, or a PC.  For me, getting the most out of the laptop, while keeping it cool and running at an optimum temperature (to avoid GPU overloads, etc), is my top concern.  Razer’s laptop line, from a company that focuses on MASSIVELY GPU intensive games, should be a good match for this editor who needs a massive amount of GPU power for running DaVinci Resolve and all it’s effects.  The Razer Blade 15 Studio Edition was the laptop that was sent to me, so let’s take it out for a spin!

If you read my article about building a PC for Media Composer, you’ll know my issue with Mac’s.  Ventilation.  So, getting the best laptop I can, with the absolute best design for what I’m going to be doing is essential.  The last PC laptop I had was from a while ago, and the design left much to be desired.  Gaming is Razer’s thing.  They design for gamers.  Have you seen games today?  The toll they take on your GPU and your system in general is huge, and the design of the laptops needs to be one that can sustain that type of workload for hours on end, days, weeks and years at a time.  The laptop itself is a what I want it to be.  Lightweight and thin, but not so small that it it’s difficult to use.  The Razer Blade 15 is 9.25”x14”x0.8” and weighs in at a whopping 4lbs 13oz.  That’s super small and super lightweight.  Exactly what I was hoping it would be. What’s important to keep in mind about the height of the unit is that there are two bumpers on the bottom that let the unit side a good 0.3 inches off my desktop for the ventilation underneath, but we’ll get to that in a second.

Now, I’m specifically mentioning the location of the ports as, for me, that’s important.  I don’t want all my ports on one side, as I want flexibility when taking the unit on location, and the Razer Blade 15 definitely offers that.  One thing that I also want to mention is the heavy duty power cable, and the fact that it is a bent cable, which is very nice, as I hate power cables that plug in directly out of a laptop, adding length to the side to side dimensions of the laptop.  Another thing that I’m super happy with is the fact that there are no input/output ports on the back of the unit.  Keep it simple!  I like that.

The Razer Blade 15 has some pretty impressive speakers sitting on the surface of the unit.  4.25”x1” Stereo speakers on both sides of the surface, which is way more than enough if you choose to go without headphones.

Alright, let’s get to my most important feature.  Ventilation.  If you flip the Razer Blade 15 over, you’ll notice there are two 2.25”x1.75” vents on the bottom of the unit.

That’s a lot of airflow that can go to and from the unit.  Remember, this is a gaming laptop designed to play the newest Call of Duty game all day.  If the laptop can handle the ventilation required to stop overheating for that, it can handle DaVinci Resolve’s GPU needs. 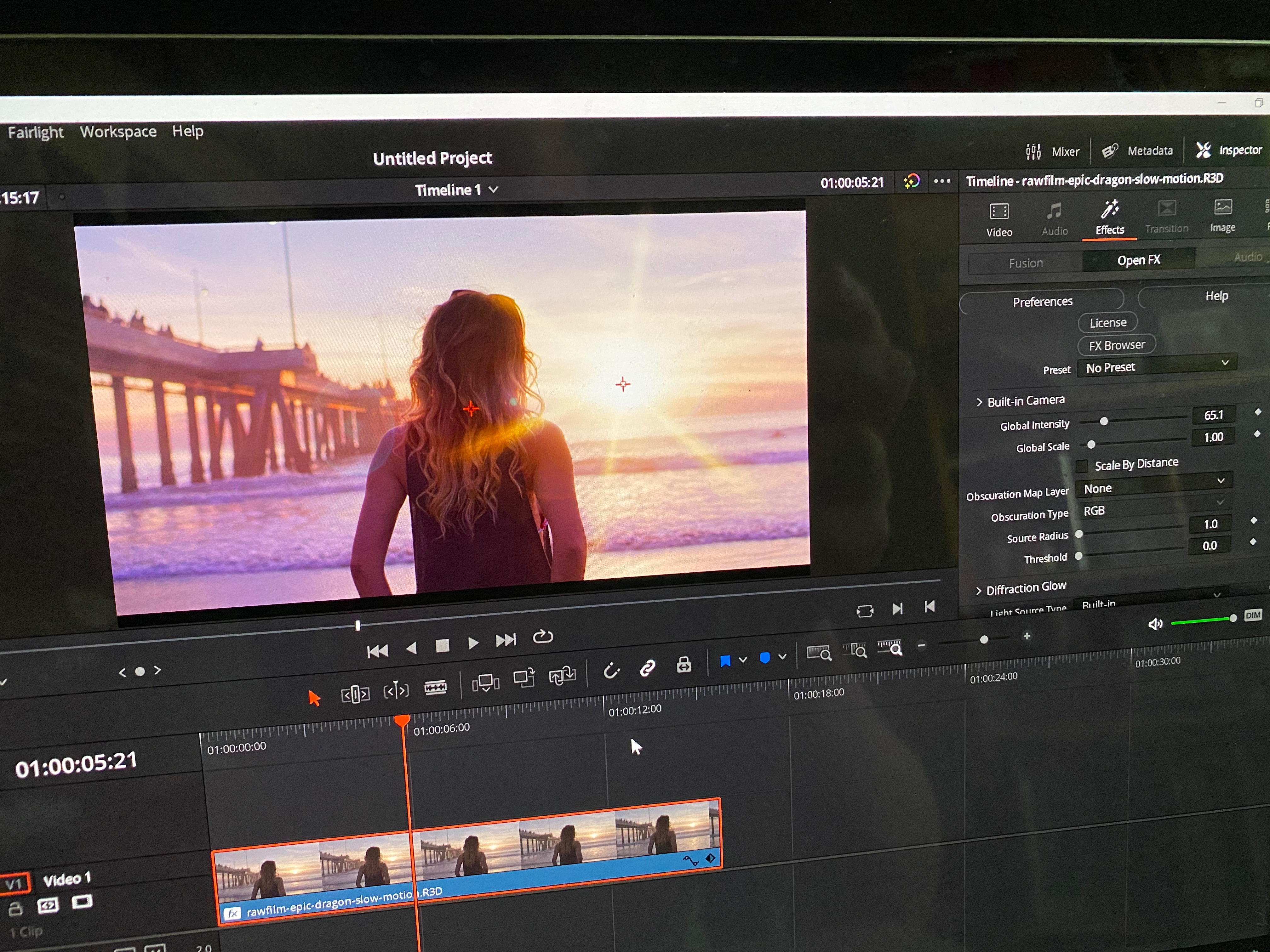 One thing that I do mention to people is that I always like to pick up a cheap laptop cooling pad.  Does the unit need it?  From my testing it doesn’t, but I always like to air on the side of caution.  You can’t have too much cooling!

Alright, now that we’ve talked about the laptop’s design, let’s talk about the guts of this particular machine.  The unit that was sent to me is an i7-10875H 8 Core-16 thread CPU with a max turbo frequency of 5.10 GHZ.  This is the same processor used by Razer across their entire laptop product line.  RAM, you’re looking at 32G as a max, again, across the entire product line.  Keep in mind, that I did say a max of 32.  There are lower end models that do come with 16G of RAM, but if you’re purchasing this for post production work, 32 is the absolute way to go.  Much like with RAM, the hard drive capacity will fluctuate between a 512G SSD and a 1TB SSD.  The one in the Razer Blade 15 that I have is 1TB, which is way more than I’d ever need in an internal drive, as the TB3/USB-C ports give me a never ending (not really) supply of external drives that I can hook up.  Now, you might be thinking that 32G of RAM is a little bit light, but the graphics card more than makes up for that.   The GPU in the Razer Blade 15 is an NVIDIA® Quadro RTX™ 5000 Studio Edition with 16GB GDDR6 VRAM.  Yep.  16G.  That’s a lot.  Editors know that when it comes to graphics in applications like DaVinci Resolve, it’s a GPU pig to put it politely.  I played around with RED 5K footage at 5:1, using Continuum 2021’s Lens Flare 3D effect, and Resolve was super responsive, and didn’t have a single GPU issue.  The funny thing is, that I don’t even remember the fan of the unit coming one the entire time I was playing around with the RED footage in my timeline.  I’m sure at some point it would have come on, but the fact that it didn’t, as opposed to my PC tower that’s fans start screaming once I’m working with RED footage, is pretty impressive.  This is great news for editors who use any GPU intensive applications out there (Resolve, After Effects, etc), as normally to get a GPU with 16G of VRAM, that’s a major upgrade cost, which is included in the base price of the unit.

There’s something else that I just want to mention on a side note.  I’ve never really been a big laptop guy until I sat down to use the Razer Blade 15, and it’s really the first laptop that I could see myself taking on the road with me, or even sitting in my backyard, and working with it.  But that does beg the question, what’s the best way to hook up external hard drives to it.  Most people who ask me, I tell them that Thunderbolt 3 is the way to go.  The USB-C connection will give you 20G/s, but something more important than that, is the cable run to your hard drive.  How annoying are Thunderbolt cables, as the are notoriously short.  Well, they do man Optical Thunderbolt 3 cables that will give you cable runs of 16′ to 164′, which makes using those big external hard drives with a laptop much more appealing, as your drive doesn’t need to sit less than 3ft away from you, due to the super short cable runs, traditionally associated with Thunderbolt.  Just keep in mind that the longer an optical TB3 cable you need, the more it’s going to cost you.  But anyways, back to the Razer Blade 15!  Alright.  Let’s talk about cost!

The Razer Blade 15 Studio Edition’s normal MSRP is $4299 US, but I have consistently noticed that it’s on sale for around 10-12% off, so you can pick it up for $3799 US.  If you’re relatively new to post production,  you might think that’s a lot, but in reality, I find it to be totally comparable with other systems out there.  Laptops, especially for what we are, are normally fairly expensive, but a laptop like this, with all the features is right in line with its competitors when it comes to the price of the unit. 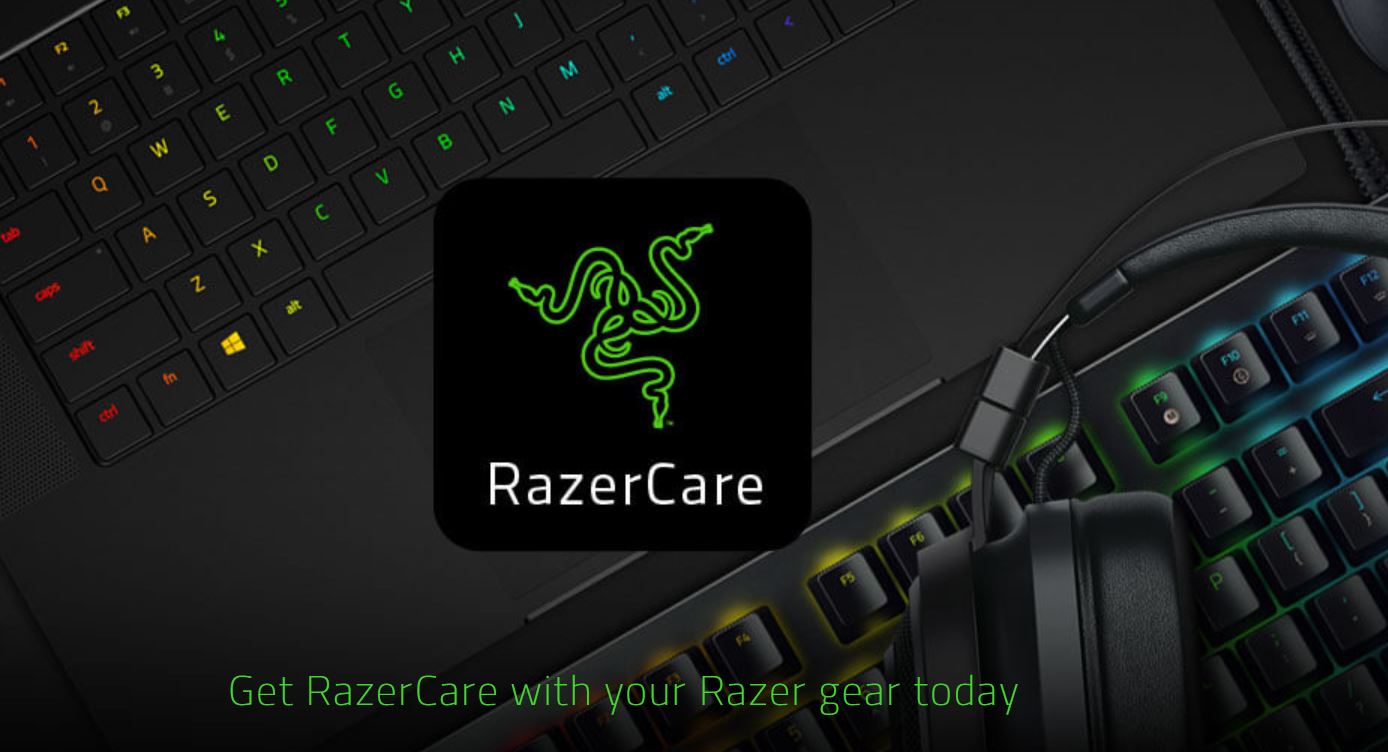 Much like AppleCare for Mac’s, Razer Care is here for purchasers of this laptop, and it comes in two flavors.  Elite and Essential.  What is the difference you might ask, well both flavors offer:

Now, here’s what separates the Elite from the Essential (above).  Accidental Damage Coverage (ADC) from day 1.  That means that the system is covered additional for drops, spills, falls and collisions.  The price difference between the two is $369 for the Elite (includes ADC) and $249 for the Essential.  Now, please keep in mind that Razer Care is only available in the US, and how it actually work, if you read the fine print is very clever.  Let’s say something happens, and your screen dies.  You’re on the Elite plan, so you ship your laptop back to Razer to be fixed (two-way shipping is included in Razer Care).  Razer determines that the screen will cost $500 to replace.  You paid, in our case – using the RB15SE as our system, $3800 US.  That $500 is deducted from the $3800 you paid originally, and you now have $3300 “banked” for any further accidents you might run into, throughout the remainder of your service contract.  It’s a very clever way of doing things, this way, if you have multiple issues with your system, you’ll still have “credit” banked away to use as needed. 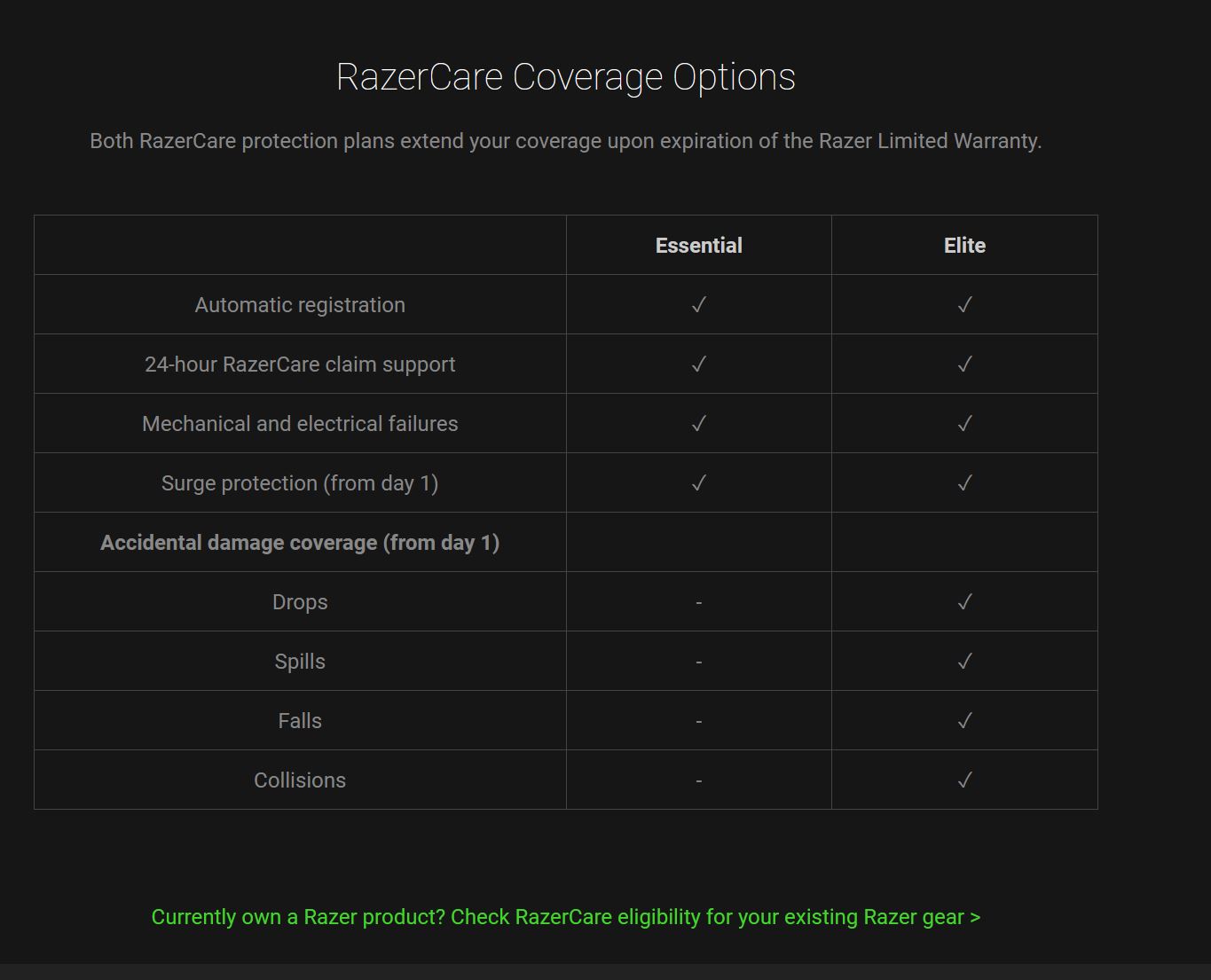 If I had to pick one downside to this laptop, it would be that there’s no way for me to customize it at all.  That seems to be the way Razer sells their entire laptop product line.  Really, the only thing that I would be customizing in it would be to bump the RAM up to 64G, which is what i would do if I was purchasing a comparing Mac, but at the end of the day for the work that I’m doing, the 32G of RAM works out well for all my editing and graphics needs.  I will say, however, that having the super powerful GPU does help ease the pain of only being able to have 32G of RAM in the machine.  LOL.  I also found the Razer Care “Only in the States” issue to be annoying, as AppleCare is covered worldwide, which is something that Razer should look into.

I love this laptop.  Razer designs laptops for gamers, and by doing that makes them an easy slide over into the post production world.  The things we care about, power, design, portability, reliability, value for your dollar and (assuming you live in the States) Razer Care are everything that makes this laptop great.  If you’re looking to pick up a Windows laptop for Post Production work, you need to give serious thought to the Razer Blade 15 Studio Edition.  What you get for the price can’t be beat!