With the delivery of my new Canon C300 Mk II, I’ve had to retire my trusty CF card collection, which served my original C300 so well for nearly 4 years. But the C300 Mk II, with its 4K and raw recording modes, requires CFast 2.0 cards, which look like CF cards but are much faster and, of course, more expensive.

When I went looking for CFast cards, I could choose from a number of vendors, including SanDisk, Lexar, Transcend and others. But I chose Lexar’s Professional 256GB card ($629 at B&H) and it’s been working flawlessly with the Mk II. Here are some specifics on why I chose Lexar, and how its card performs… 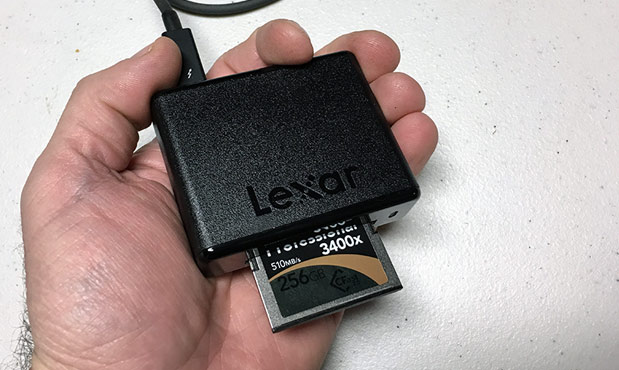 I didn’t find the Thunderbolt card reader was apprecibly faster than the USB 3 reader, but it gives you more flexibility when you’ve got limited ports on a laptop.

Lexar sells a couple of good CFast card readers, including the Lexar CR1 (USB 3, $19.99 at B&H) and the CR2 (USB 3 and Thunderbolt 2, $88 at B&H). Both card readers are fast using USB 3, provided you’re copying your footage to a fast drive. For instance, I used the CR2’s USB 3 port to copy the full card to an 8-drive, Thunderbolt-2 RAID, taking 26 minutes, 51 seconds. I used Shotput Pro to do the copy, which adds a little time for Shotput to do its bit-for-bit safety verification. Next, I tried copying the same card to a single SSD connected to my Mac Pro via USB 3, and that copy took 29:31. I also tried the copies using the CR2’s Thunderbolt 2 interface, but only shaved a minute off of each copy time. Saving a minute doesn’t justify the higher price of the CR2 vs the USB 3-only CR1, but I do like having the option to copy cards from Thunderbolt, leaving limited USB 3 ports on a laptop free for multiple drives. Anyway, all of these copy times are pretty impressive for a 256Gb card, but just keep in mind that a fast card or reader can’t help you if you’re offloading to a spinning hard drive. Case in point: when I tried to copy the same 256GB card to a 5400 RPM portable field drive, the copy took almost an hour and 20 minutes.

One last thing regarding Lexar’s card readers: they work as stand-alone readers, but they’re also designed to plug into a small, 4-bay hub also made by Lexar (the HR1 is USB 3, and the HR2 adds Thunderbolt 2). If you’re doing a lot of media management, being able to plug these into a vertical hub saves desk space and cable clutter, and the hub also accepts other Lexar readers that can handle CF, SD and other card formats. 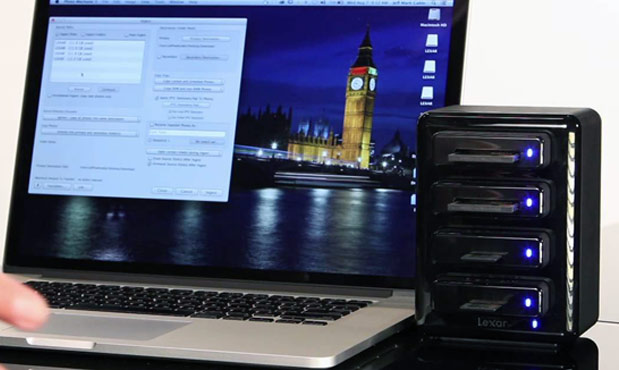 Right before press time, Lexar began to ship a new 3500x card that’s replacing the one I worked with. It’s got the same write speed of the 3400x card you’ve just read about, but a slightly faster read speed of 525 MB/s versus the 3400x card’s 510 MB/s. Lexar is also shipping a new 3600x card that’s specifically designed to work with Arri cameras like the Amira or Alexa Mini. Its write speed is no different than the 3500x card, but has a higher read speed (540 MB/s) and Lexar says its firmware is especially tweaked for the Alexa. You can see a breakdown of all three card types here.

Right now, Lexar has the best option I’ve found for new C300 Mk owners. The 3400x card I tested is a fast, reliable card, and it’s combined with the only 256GB capacity currently shipping that can keep up with the Mk II’s data rates.

Helmut Kobler is a Los Angeeles-based DP and cameraman at: www.losangelescameraman.com