The CamRanger is a small, white, wireless controller for your camera. It attaches to your Canon or Nikon DSLR (Full list available at http://www.camranger.com/supported-cameras/) via USB cable. From there, download the CamRanger app to your iPhone, Tablet or Mac.

It allows you to wirelessly control your camera the way high-end tethering solutions do, but without the cable and expense.

It's fast and intuitive to set up. The box has the device, a battery and a pouch with a mini-carabiner. Connecting is easy. Download the app, plug the device into your camera and turn it on, then connect to it using Wi-Fi. It's a solid connection, unlike things like the Eye-Fi card (which also doesn't have all the functionality, it's just for transfer). I think the connection may have dropped a couple of times in all the times I've used it, but it reconnects REALLY quickly.

The app itself is amazing. You can control EVERY aspect of the camera, from shutter speed and aperture to ISO, white balance and more. You can view the image by turning on Live View, seeing exactly, in real-time, what the sensor sees.

The CamRanger is based on the TP-Link TL-MR3040 portable wireless router. That does explain the cat-5 port. You CAN pick one of those up on Amazon for $50, but then it won't have the software/firmware that Dave and Melissa Pawlowski have created that works so well with so many cameras. I suppose if you are a programmer and want to take the time to do it yourself, go ahead. But I think your investment in time will far outweigh the price of the CamRanger and likely won't have the power or versatility.

It's small and light, about the size of a mouse or 2/3 of a deck of cards. Very easy to carry in a pocket or carry in your camera bag.

The battery is a TP-Link Li-ION 3.7 volt, 2000 mAh battery that charges inside the CamRanger. It is removeable, so you can get extra batteries for longer use times if needed. They cost around $19 each.

Standard run time is 3-6 hours. It never ran out on any of the shoots I used it on, so at least in my standard use, one battery was enough. You can plug it in to charge any time using the micro-USB port, and it can be used while charging.

For one different part of the review, I was with friend and colleague Morgan Segal on one of his car shoots. His work usually involves a tripod that can't be moved, long exposures, and sometimes the camera is carefully braced in the back seat to shoot the dashboard. Traditionally, he's stuffed in the back with the camera and tripod, trying not to move at all. Any shift in weight or movement means that the camera moves, causing motion blur on long exposures and out-of-register images on multiple exposures. The latter CAN be corrected in Photoshop, but it's much more efficient not to have to. 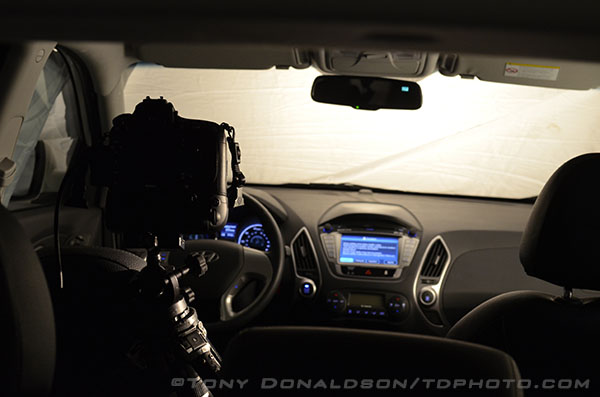 Here's Morgan's camera in the back seat. 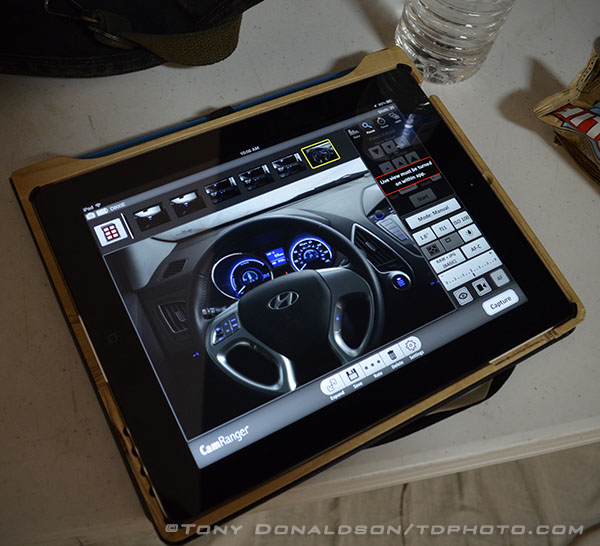 And here's the corresponding view as he controls it.

He's in LOVE with the CamRanger. It gives him full control without touching the camera, and he can see each image as he shoots it.

The amazing thing is that the CamRanger can set focus in live view mode. That sounds cool, but it's cooler than that. It doesn't rely on any of the focus points on the camera, it can focus on ANY area of the frame, as long as there's some contrast. 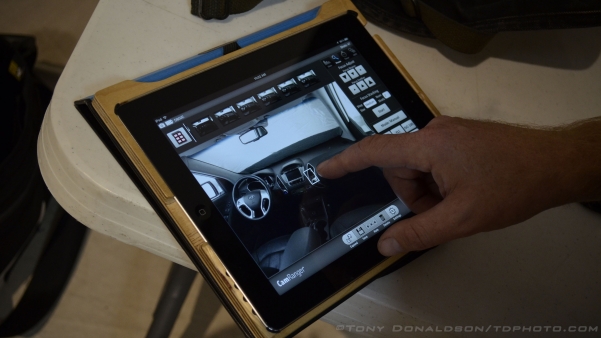 I shot a variety of stuff. Did shoot some start trails. It won't go longer than you can program for shutter speeds, so the bulb setting isn't that useful. A simple lockable electronic cable release is better. But if you are shooting an intervalometer sequence on a cold night, this is much better because you can sit in your car and not be freezing.

All of that said, it doesn't completely work for me. Most of that isn't the CamRanger's fault. Let me explain: I shoot people most of the time, which means I have the camera in my hand, not on a tripod. Now, the ability to shoot images straight to my iPad is fantastic, but I also like to see them at times on the back of my camera. I love to quickly confirm that the lighting looks the way I want and make sure the subject wasn't blinking during that last amazing shot.

But I shoot Nikon. And Nikon for some reason thinks that when you plug anything into the USB port of their cameras, it turns off the LCD. Completely silly in this modern world where processors can certainly handle that, yet professionals still don't have this option. It's why I never shoot tethered, either.

Morgan, on the other hand, loves it and bought one. For the way he shoots, it's very useful.

It was actually useful for me recently on a video interview shoot, when I was able to show the talent my exact framing on the shot. But then I had to unplug it to be able to shoot. Cool on the former, annoying on the latter. It is good for anyone who shoots a lot of video and wants a larger screen so the director can watch.

Overall, it's a good product, with unique and brilliant features that many photographers will find to be well worth the money. It's very easy to use, the interface won't win any beauty contests, but it is intuitive.

Support is good, it's truly a mom-and-pop company that responds quickly. Dave has been very quick in getting back to me and they are working on expanding capabilities to make it even better and more useful.

You can order direct from CamRanger or via Amazon.com.

A quick behind-the-scenes video can be seen HERE.

Tony Donaldson is a freelance commercial and editorial photographer based in the Los Angeles area who specializes in personalities, cars and sports images. People are his passion, whether they are top athletes or celebrities or timid executives. His past and present clients include Scion, Lincoln, Buick, Chrysler, The New York Times, ESPN The Magazine, The Wall Street Journal,Scholastic, Zero Motorcycles, Razor, and many more. He writes about technology and photograph, has written two books on BMX, was a regular contributor to Xtreme Video magazine and consults and speaks around the country on shooting action sports and lighting.