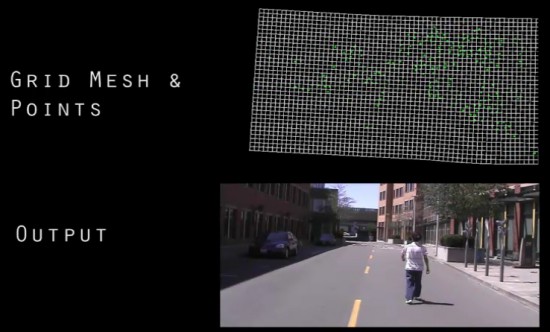 Here’s a sweet little bit of research in the works…Adobe and some folks at the University of Wisconsin have come up with a software solution to automatically remove shakes and wobbles in amateur video footage. Their solution automatically 3D tracks the footage, then selectively distorts the frame to compensate for wobbles and shake. Watching the video demonstration, it appears that this technique might also be effective at removing CMOS skew and jello/wobble as well. Read on below…

“The process starts using off-the-shelf software called Voodoo Camera Tracker that can reconstruct a camera’s path through 3D space from a video sequence. Using that as a reference, the software then tries to distort each frame to create the way things would have looked were the camera to have been on that perfect, smooth path. Rather like a fun house mirror, different regions of each frame are warped by different amounts.That distortion can be apparent when frames are examined individually, but when run in sequence, the brain thinks it is seeing footage taken from a camera moving on a steady path through space.”

The effect is convincing…watch the video below for an example.

You can read the entire article over at New Scientist. There is also a very interesting white paper with more examples and a really nice extended video that shows the technology and software in detail. The research team suggests that it will be a few years before we’d see this sort of technology in consumer hands, but here’s hoping Adobe or some other big player integrates this into an pro NLE or VFX application soon!