Aye, laddie, it takes you back… 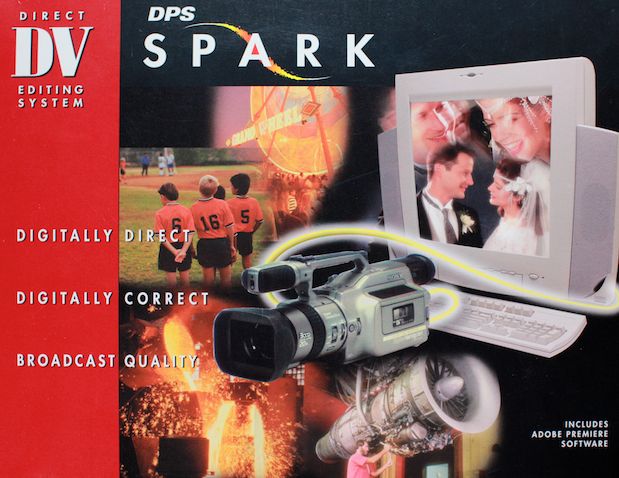 Over the weekend I cleared out a bunch of old gear, including the capture card that launched a revolution: the DPS Spark. Thirteen years ago, this card changed low-cost video editing forever.

The Spark was an Adaptec 8940-based IEEE 1394 capture card released in 1997, the first PC- and Mac-based card that allowed capture of DV material in its native form. This was back in the era of cutting-edge 133 MHz Pentium CPUs running Windows 95 and Windows NT, and 266 MHz PowerPC G3 Macs running OS 8. 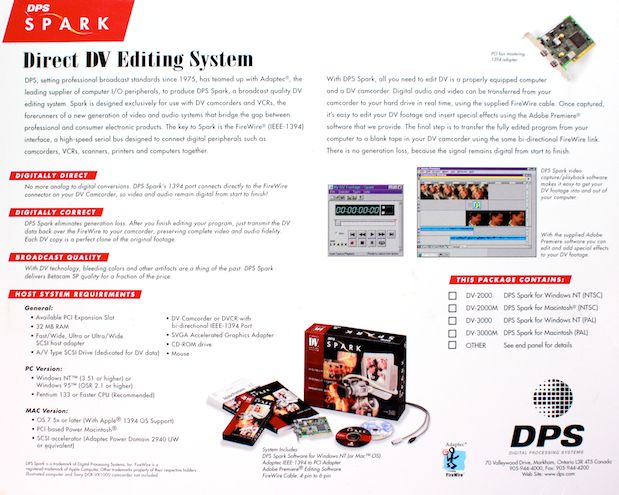 The back of the box for the original Spark card.

With this card, we could capture streaming DV data at a staggering 3.6 Megabytes per second directly from a camera, with no transcoding. Finally, the promise inherent in our Sony DCR-VX700s and DCR-VX100s, as well as the Panasonic and Sharp DV camcorders, could be realized: lossless capture and editing (lossless on cuts, and Betacam-or-better multigeneration quality when rendering), something not even remotely possible in the sub-$10,000 world before that time.

After capture, handled by the Spark application, we could fire up Adobe Premiere 4.2 and edit the material; afterwards, the Spark app could be used to send it back to the camera.

The Spark, installed in a precious 33 Mhz PCI slot. A standard ISA slot is visible at the bottom of the image.

The staggering data rate of this new digital format required a dedicated SCSI card feeding a high-powered capture drive—but a single, albeit expensive, drive was able to handle the flood of data, so we didn’t need to build arrays. 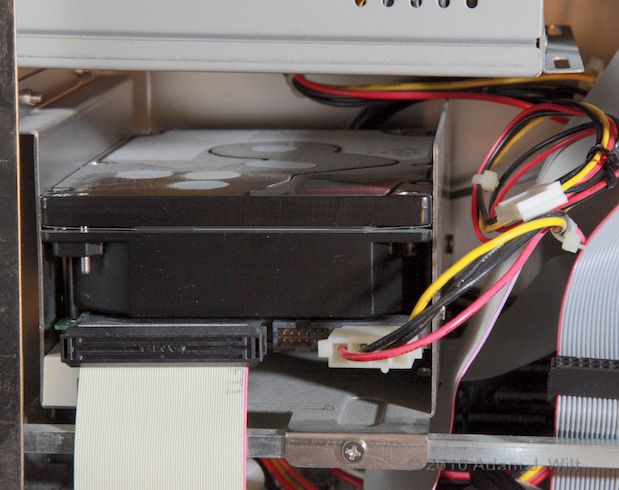 I had a gig investigating visual artifacts for a digital cinema projector manufacturer at the time, and they funded the purchase of this Spark card, the SCSI controller, and the SCSI disk; the Spark was $899 if I recall correctly, and the disk and controller cost another $1000; that’s about $2586 total in 2010 dollars.

The Spark wasn’t an OHCI (Open Host Controller Interface) compatible FireWire board, and the world soon passed it by. Merely two years later, I was capturing DV on a “Wallstreet” Powerbook G3 and editing in some newfangled thing called Final Cut Pro 1.0, which didn’t even need a separate capture/playback app, and was able to play DV at 25% magnification without dropping frames—truly remarkable at the time.

DPS itself was consumed by Leitch, which was later swallowed by Harris, and the Spark is no more, though you can still find the Spark Plus—both 1394 and SCSI on the same board—from B&H, for a mere $49. How are the mighty fallen!

Yet in its day, there was nothing like it: it was the first card to allow a fully digital capture/edit/playback pathway affordable by civilians. The revolution the Spark spearheaded continues today. A tip of the hat, then, to the memory of the DPS Spark!