For some 30 years the Gwich’in people, living across northeast Alaska and northwest Canada, have been deeply involved in a fight against oil extraction and climate change. Now there is a short film to help the fight. 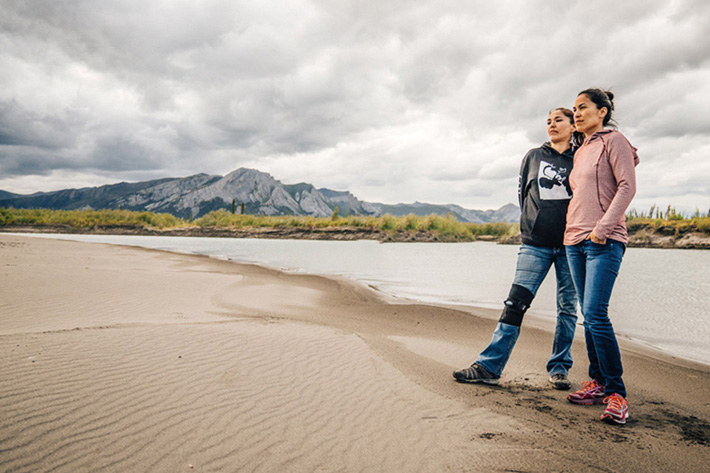 A Finback documentary now released shows an ancient way of life under threat in the Arctic National Wildlife Refuge. A story about an untouched wilderness that may be gone tomorrow if no one takes measures to help the Gwich’in people in their fight.

We do live in a strange world. On the one hand, electric cars and clean energy are said to be the future, and the preservation of nature and the environment a promise of many treaties; on the other hand, we want to drill down vast landscapes looking for oil, destroying unique images of wilderness that do more for us than creating a nice background to some holiday shots. Sometimes, I ask myself if we really are an intelligent species…

The just released short film, The Refuge, focuses on the Gwich’in people of Alaska and Northern Canada and their more than three decade fight to protect the Coastal Plain of the Arctic National Wildlife Refuge from oil drilling and other threats. For hundreds of generations, the Gwich’in people, living in fifteen villages and small towns scattered across northeast Alaska and northwest Canada, have depended on the caribou that migrate through the Arctic Refuge. It’s not just their food supply, they believe they are guardians of the herd, and that the fates of the people and the caribou are forever entwined.

With their traditional culture now threatened by oil extraction and climate change, two Gwich’in women are continuing a decades-long fight to protect their land and future. The film focus on their story and the efforts made to save their ancestral home and the wildlife on which their life depends.

The film was produced by outdoor apparel company Patagonia, directed by Finback, the directing team of Kahlil Hudson and Alex Jablonski, who are represented for commercial projects by Los Angeles-based Accomplice Media and produced by Finback’s Tyler Hughen. The team continues, here, to pursue their goal: a tenacious, humble approach to filmmaking. Working organically, they get under the skin of their subjects and reveal what makes them tick. 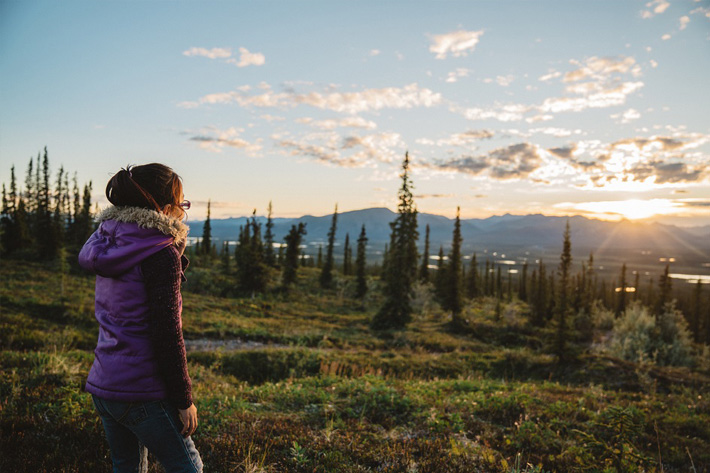 For the film, Hudson and Jablonski traveled with the two women from Fairbanks to Arctic Village, on the southern edge of the Arctic National Wildlife Refuge, for a biennial Gwich’in Gathering. There they documented the group’s ancient rituals and the subsistence lifestyle that they have practiced for more than 20,000 years. “It was stunning to encounter an untouched wilderness; there is so little of that left in the world,” recalls Jablonski. “It was also a revelation to learn about the Gwich’in’ and how closely their lives are entwined with the land.”

Filming in such a remote location was severely challenging. As there are no cars in Arctic Village, bulky film equipment had to be transported by ATV or carried on foot. Electricity was also at a premium. Hudson and Jablonski had access to just one electrical outlet for use in charging camera equipment and computers.

During their week in Arctic Village, Hudson and Jablonski kept their filmmaking work as low key as possible even as they lived with the group and took part in their activities. “They’re very inclusive people,” recalls Hudson. “Everyone ate together, danced together and sang together. It’s a very different type of filmmaking when you are taking part in the experience you are recording, but that is what I appreciated most about it.” 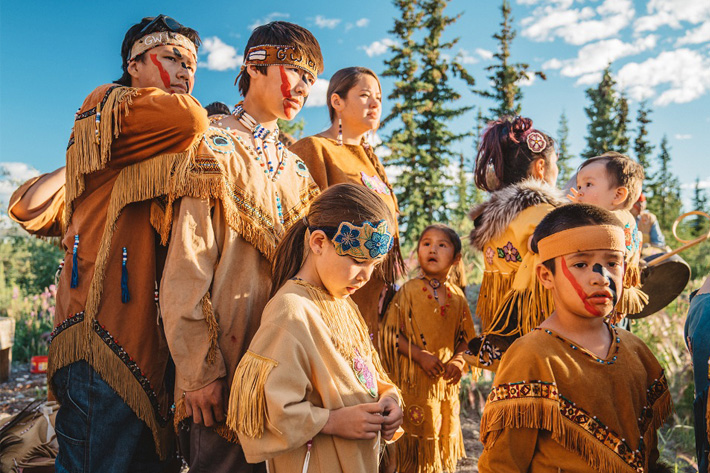 The pair brought in a bush pilot with a homemade aircraft to capture aerials of the spectacular and unspoiled environment. In particular, they wanted to capture the sun rising over the vast expanse of snow and trees, but the length of summer days in extreme northern Alaska made that difficult. The sun did not set until after 1 a.m. and rose less than three hours later.

A break in the weather toward the end of the week provided the opportunity they had been waiting for. “We got up, put the camera on the bush plane and flew out at 4:30,” says Hudson, “and we hit perfect light. It was coming in sideways through thick clouds and illuminating the most beautiful language you’ve ever seen.”

“It became the transcendent moment in the piece that gives people a sense of what that place is like,” adds Jablonski.

“I was honored to work on The Refuge with Alex and Kahlil,” notes Monika McClure, film and video producer for Patagonia. “They brought so much depth to the project through their beautiful cinematography and gift for storytelling.” Patagonia has supported the Gwich’in Steering Committee and the Alaska Wilderness League through its Environmental Grants Program since the early 2000s. The company is now standing in solidarity with the Gwich’in people to ask Congress to designate the coastal plain of the Arctic Refuge as wilderness, protecting it from oil drilling and industrial development forever. 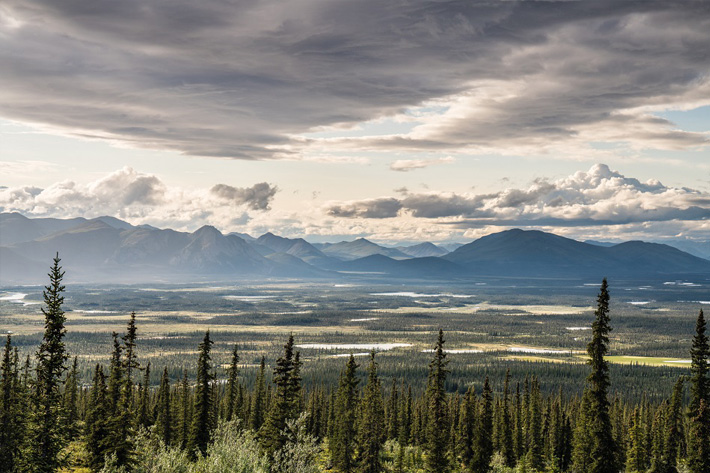 According to Aljazeera, there is an Obama’s proposal which “will add ‘wilderness’ designation to the entire Alaska refuge, making it more difficult for companies to drill for oil and gas”, but with the coming changes at the White House, no one really knows what is going to happen.

The Refuge was recently screened at The Smithsonian Institution National Museum of the American Indian. The film is being promoted in U.S. retail stores and through email marketing. It can be viewed on the Patagonia website where those interested will find more information about the Gwich’in people plight.

Hudson hopes the film will make an impact on the future of the Refuge and the ongoing struggles of native peoples to secure their rights. “I hope we’ve done justice to the Gwin’ich,” he says. “It is humbling to come in at the 11th hour after the tribe has been fighting to preserve their way of life for more than 30 years.” 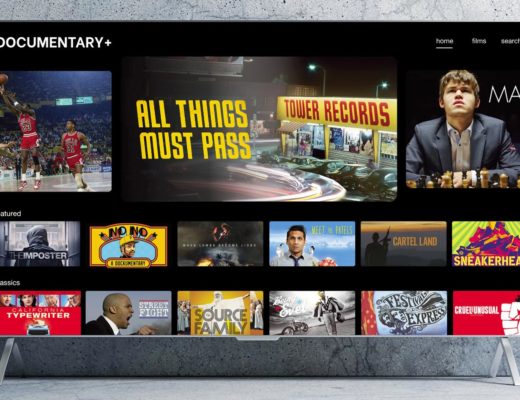 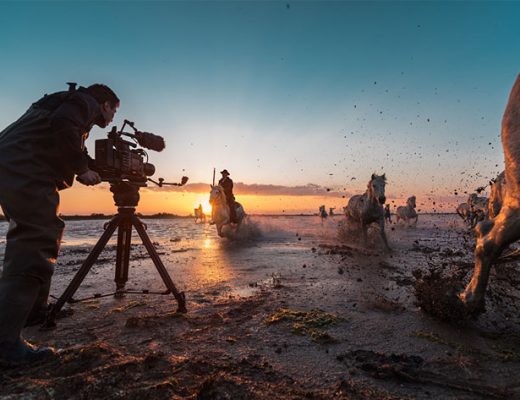 The docu-fiction Remembering Papua New Guinea will keep your eyes glued to the screen. DP Paolo Sodi explains how...