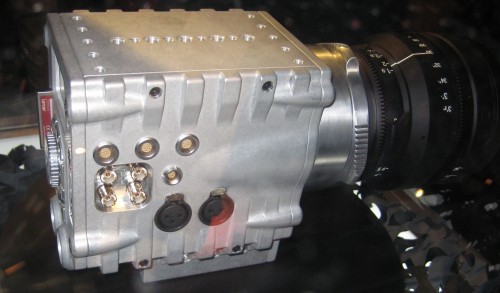 OK, I’m on the show floor and furiously typing this up, so this is quick, rough, but info-laden –

Read on below for all the gory details.

PRICE: 5K camera, up to 100MB/sec codec, up to 100 fps, for $40K? Hmm…that is gonna be tough to compete with. What else do you get for $40K that’ll do variable frame rates? Varicam? I’ll need to see new Sony & Panasonic stuff, but for the money, I don’t anticipate anyone can touch it.

5K MYSTERIUM X SENSOR – another member of the Mysterium family, this one is 5K. They will not give an exact pixel count at this date. It isn’t anamorphic, so presumptively 16×9 or thereabouts. “Mysterium X” sensor. What resolution exactly? Stuart said he interprets 5K as a minimum of 5 times 1024 (that’d be 5120), didn’t give vertical pixel res, but if 16×9 (my assumption), and horizontal is at least 5120 as Stuart stated, then that would imply approximately 2860 pixels tall IF 16×9. That is all assumption, but should be putting us in the ballpark.

-Stuart said SurroundView CAPABLE, so I’ll interpret that as sensor is 5K, if you want SurroundView, it might be using those pixels, so might not record 5K with surroundview on.

My own random speculation – no stated vertical resolution. Bump to 5K. Better? Sure. But why such a relatively mild bump? Since they aren’t saying it is a 16×9 sensor, but saying it isn’t anamorphic, perhaps part of the deal will be to support better resolution for anamorphic shooting modes? If bump up to 5K horizontally, what’s the vertical res? And would it benefit/behoove anamorphic modes? Just a thought.

-same EVF cable, same EVF? Ted says likely yes, Stuart says “really smart to do that”. Stuart English also said if a better (say 1080 res) EVF were to be invented, the EVF is built on DVI and it would support that res. Not saying 1080p EVF coming, or planned, but the hardware could support it in theory.

-more compact than Red One, shorter, wider
-full size XLR and HD-SDI connectors, no mini-connectors
-note top is a big solid mounting plate (I hope they go with threaded inserts so it doesn’t ruin the hole if you strip it out)
-NON-optical viewfinder path I notice – so no optical viewfinder as shown, nor as designed based on what htey are showing us today
-can do 15 or 19 mm based rod systems

Redcode RAW & RGB, up to 100 MB/sec. Yes, 100 megaBYTES, not megaBITS. 100 MB/sec at up to 100 fps would imply 1 MB/frame? Not necessarily, according to Stuart. I read that as higher datarate per frame for even higher quality per frame is an option, but at what frame rates isn’t known yet.

TRADE IN/TRADE UP OPTION FOR RED ONE OWNERS:

-can upgrade to Red Epic from a Red One – you’ll get a $17,500 credit for your Red One body towards the purchase price of an Epic. Even used. So buy a Red One now, can trade up (if you wish) at ZERO additional cost to an Epic. Wow.

Q: 1080p clean output?
Stuart: “We certainly are not in love with interlace.” – so progressive, not interlaced. Presumably 1080p, but not verified as well.

Q: Uncompressed RAW port?
Stuart’s answer: We will listen to customers, but we feel Redcode today, with what it delivers, and what improvements we plan, will be sufficient.

My read – unless there is a sizeable demand, nope. Considering how good Redcode 36 is, and they’ll do up to 100 MB/sec codecs….I think it’ll make 95-99% of users completely satisfied (especially for the money).

-“Everything is always being optimized” – so specs will change, often for the better is my read on that.
-learning from the Red One, evolving, don’t stand still, learn, adapt, build, make better.
-Epic is revolutionary – “If you see anything not revolutionary in this booth, tell me and we’ll fix it.”
-Why do Epic? “Because we can, we have the technology to do it.”

It is the next step beyond Red One – they learned a lot, they’ve improved the Red One, but they saw other places they could go, so they are going there.

And no, like last time, the camera won’t be silver – these are just mockup pictures.